The worst snowfalls in a decade caused traffic chaos across much of China as millions of people tried to head home for the important Lunar New Year holiday, state media reported. Tens of thousands of travellers were left stranded as transport in several regions across the centre, east and south of the country were hit by the bad weather.

Several highways and airports, including in the central city of Changsha, were shut, state-run television CCTV reported. The worst-hit provinces were Anhui in the east, central Hubei and Hunan, which supply millions of migrant workers who work in the cities and return to their families to celebrate Lunar New Year, which this year falls on February 7.

Many trains were delayed in Hunan along the key railway line linking Beijing with the main southern city of Guangzhou, after snow and ice damaged overhead power lines for the electric trains, the official Xinhua news agency said. About 40,000 passengers were stranded at various stations along the route, Xinhua said, quoting a spokesman for the Guangzhou Railway Group Corp.

He said the company had dispatched some 10,000 workers to repair the damaged power lines and sent out more than 100 diesel locomotives to pull the electric trains and transport stranded passengers. Many parts of the country have been hit by the heaviest snowfalls in a decade, which have claimed at least 21 lives so far, state media reported. The meteorological agency warned of further snowfalls in central and western China over the weekend.

Produce worries
At the same time, the government called for all the services concerned to do everything possible to get fresh produce to markets and avoid shortages, which would fuel further inflation, a major concern for the authorities.

"Transportation of fresh farm products - including vegetables, fruits, livestock and poultry - faces an extraordinarily grave situation as another round of widespread, continuous rain and snow will hit the country," the government said in a statement.

"The transport authorities must strengthen road maintenance and promptly clear snow and ice from all the main and branch roads."


BEIJING (Reuters) - China on Sunday ordered urgent steps to fight transport chaos and threats to energy and food supplies caused by brutal winter weather that forecasters said will continue as the nation heads into a major holiday. The cold spell has lashed central, eastern and southern China in recent days, bringing heavy snow and sleet to provinces used to milder winters. Dozens of people have died, and many roads, railways and airports have been paralyzed. Chinese Premier Wen Jiabao said the chaotic weather was threatening lives and straining supplies of fresh food, coal, oil and electricity ahead of holidays marking the Lunar New Year, which starts on February 7.

The worst snows to hit parts of China for 50 years have killed at least a dozen people over the weekend, state media said, with thousands more injured as they headed home for the Lunar New Year holiday. The conditions brought traffic to a standstill in eight provinces, cut off a key rail link and left thousands of vehicles marooned on icy highways, reports said, with the cold snap causing power cuts across more than half the country.

A bus that overturned on an icy freeway in eastern Jiangxi Province left five dead early Sunday, including at least two children, the official Xinhua news agency said, with sub-zero temperatures forecast for the next three days. Heavy snow in south-central China, meanwhile, snarled roads, railways and airports with the bad weather expected to worsen as millions of travellers head home for the Lunar New Year holiday, known elsewhere as Chinese New Year.

In the mountainous Guizhou Province in the south-west, a hospital in the capital city of Guiyang has received at least 1,500 patients in the last five days, most suffering fractures after falling on slippery roads. The local government said bad weather had also stranded more than 40,000 passengers in at least 5,000 broken-down vehicles on highways between Guizhou and the neighbouring Guangxi Zhuang Autonomous Region.

We're trying to provide them with food and water, but several have passed out in the cold, including a new mother and her one-month-old baby, said Huang Zhengfu, secretary-general with the prefectural government. Elsewhere, up to 150,000 passengers were stuck at the Guangzhou railway station, the southern end of the key rail link to the capital Beijing, with numbers expected to grow to up to 600,000, the Southern Metropolitan Daily reported.

Workers shovel snow from a car showroom which collapsed after heavy snowfall in Wuhan, in central China's Hubei province.


At least 100,000 passengers were stranded at Guangzhou Railway Station in south China's Guangdong province Sunday, Jan. 27, 2008, as trains are delayed by snow in other parts of the country. Forecasters warned of more snowstorms in central and eastern China, telling local governments to brace for further pressure on already severely strained transport, power and communications.


Snow-covered buildings are seen in Nanjing, in eastern China's Jiangsu province, Jan. 28, 2008. A new round of blizzards threatened Chinese provinces as they tried to dig out from snow and ice storms that have stranded hundreds of thousands of people during the nation's busiest holiday travel season.


Bicycles are seen buried in snow in Nanjing, in eastern China's Jiangsu province.

Chinese workers and army soldiers were racing to sweep snow-covered highways and unclog railway routes for millions of travelers trapped by cold weather. More than 67 million people have been affected by the weather and economic losses are expected to reach as much as $3 billion, Chinese officials say.

Blizzards have snapped power lines and destroyed houses and farmland, prompting fears of food and energy shortages. Twenty-four people have died and some 827,000 people have been evacuated in 14 different provinces, the Ministry of Civil Affairs said Monday.

Souzhou, China, is blanketed by the most snow the city has had in 25 years, according to I-Reporter Susan Arthur.

In the past week, the snowstorms have hit the provinces in central, eastern and southern China places that are used to mild winters, not extreme wintry blasts. We've never seen such a cold weather lasting for such long a time," said Tang Shan, a man in his 70s in Changsha, the capital of Hunan province. "The last time we had one here was over 50 years ago, and not this bad.

The snow and sleet have paralyzed roads, railways and airports, leaving tens of millions of travelers marooned, officials say. Many of them are bound for home ahead of the traditional Lunar New Year, also known as the Spring Festival, which falls on February 7.

I-Reporter Cindy Van Den Heuvel says there are few vehicles on the road in Nanjing, China.

For several days before and after that day, an estimated 178 million Chinese will travel by train, and 22 million more by plane, officials say. Millions more will take long-haul vans and buses.

The Lunar New Year travel is China's busiest travel period of the year. But the cold snap is hampering travel plans. Railway and highway routes have been brought to a standstill, several regional airports have been closed and many provinces have imposed power "brownouts" to conserve energy.

A driver Monday braves the streets of the Suzhou Industrial Park in Suzhou, China.

In a rare move for a Chinese politician, Prime Minister Wen Jiabao apologized Tuesday to the hundreds of thousands of people stranded in train stations across the country as the worst winter weather in half a century combined with crippling power problems nearly brought travel to a standstill for millions trying to go home for the Chinese New Year holiday.

I apologize to you all, said Wen, using a bullhorn to address stranded travelers at a train station in Hunan province. We are currently trying our best to repair the system. First we'll fix the electric grid. After that, the trains will run again. Then all of you can go home for the Chinese New Year, the premier said, bringing applause from the crowd.

Chinese media replayed the apology several times. The unusual gesture is likely to go a long way in pacifying the anger and frustrations of the thousands stranded across the country, CNN's Jaime Florcruz said. Chinese President Hu Jintao called an emergency meeting of the policy-making politburo and promised quick action and immediate relief for those trying to make it home.

The moves are intended to show that the government is in control and taking responsibility for the situation, Florcruz said. They're also a signal to local officials to stop bickering over power usage. Provinces have been ordered to share power and energy sources so they can be diverted to where it's most needed.

The Chinese government has deployed almost half a million troops to help people affected by the worst winter weather in decades. Severe snow has hit central and eastern China, paralysing transport networks ahead of the busiest holiday season.

Some areas are also experiencing food and power shortages, with deliveries of coal and other commodities delayed. On Tuesday, the Chinese premier visited a snow-hit region and the Politburo met to discuss relief efforts. The top priority task at present is to ensure electricity supply and smooth communications and transport by every possible means, the Politburo said in a statement. 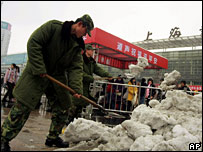 Almost 500,000 troops are being mobilised to help

It called on local authorities to increase relief efforts and ensure a supply of coal to power stations. Premier Wen Jiabao, meanwhile, apologised to delayed travellers at a railway station in Changsha, Hunan province. I am deeply apologetic that you are stranded in the railway station and not able to go home earlier, he said 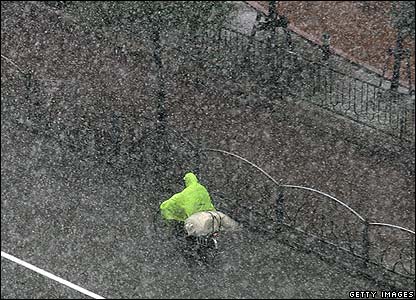 China is facing transport chaos and power shortages after heavy snowfalls - in some places the worst for 50 years. 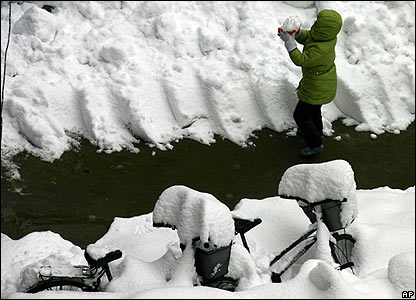 Roads have been blocked and airports closed, while power rationing has been introduced in 17 provinces as soaring demand depletes coal stockpiles. 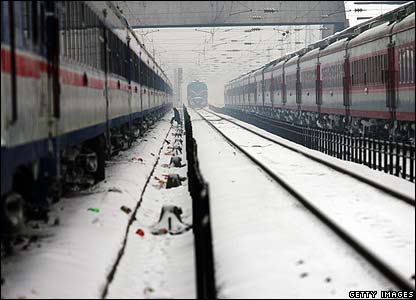 Many trains are stationary because of power cuts and blocked tracks...

More than 20 people have died in the cold spell since 10 January, and many more are thought to have died in accidents on the icy roads. 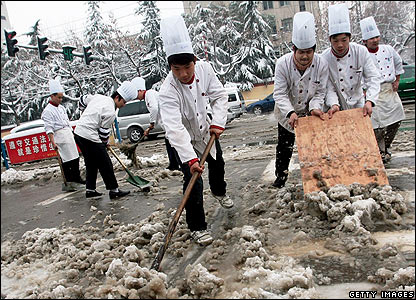 Economic losses from the severe weather are estimated at some 18.2 billion yuan (US$2.5 billion, Â£1.7 billion), officials say. 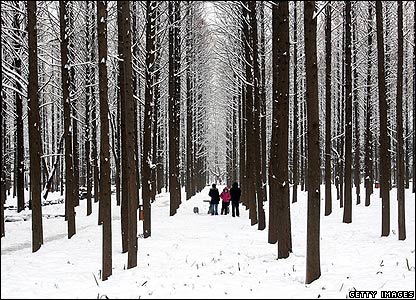 Fourteen of China's 31 provinces have been hit, with nearly 80 million people directly affected.


January 31 2008: China has deployed almost half a million soldiers alongside police and emergency workers struggling to restore road and rail links, power and water as blizzards and ice storms continue


Guangzhou: A passenger climbs in through a bus window


Nanjing: A street sweeper shovels snow into a sewer


Wuhan: A boat stuck in a frozen lake


Shaoguan: Trucks trapped at the Yunmeihua exit on the snow-covered Beijing-Zhuhai highway

More snow was to hit four central and eastern provinces, with parts of Hunan - already among the worst stricken - to see more than half an inch over a six-hour period, the provincial weather bureau said. The snow and below-freezing temperatures were expected to have further impacts on agriculture, the electrical grid, telecommunications and transport, the bureau said.

While the snowfall was not particularly heavy by northern standards, Hunan and the surrounding regions rarely see winter storms and have been ill-equipped to deal with three weeks of near continuous snow and freezing rain.

The freakish weather is China's worst natural disaster in a decade, paralyzing the country's densely populated central and eastern regions just as tens of millions of travelers were seeking to board trains and buses to return home for this month's Lunar New Year holiday.

SHAOGUAN, China (Reuters) - Emergency crews struggled on Saturday to restore power to parts of southern China blacked out for a week by heavy snow as forecasters warned of no quick end to the worst winter weather in 50 years.

Mobilizing the might of the state, China has deployed more than 300,000 troops and nearly 1.1 million militia and army reservists to get traffic moving and ensure power supplies, the official Xinhua news agency reported.

The freak weather, which has killed at least 60 people and doomed millions to a cold, dark Lunar New Year holiday, could last another week, the Central Meteorological Station said on Saturday.