Snow is expected to strike many parts of Britain, with showers forecast to fall in several areas. Blizzards are forecast for Scotland, while the North East of England and East Anglia are also predicted to see plenty of snow fall. It comes as rescuers airlifted 14 passengers from a ferry which ran aground at Blackpool in high seas. Motorists across the country have already been hit by high winds which have caused several accidents. Council gritters in many parts of England have been out overnight to try and combat the effects of the snowfall. BBC forecaster Tomasz Schafernaker said Scotland could expect gales and 20cm to 30cm of snow across the hills, but added that "this is not unusual" for the region. There will be snow in the North East, in areas such as Durham, Newcastle, Yorkshire and Cumbria starting around lunchtime. Later in the day the snow will reach Lincolnshire and East Anglia. The rest of the UK will have passing wintry flurries and sunny spells. Chairman of the Local Government Association Transport and Regeneration Board, Councillor David Sparks, said: "Councils up and down the country are on high alert for the wintry weather forecast this week. "The stockpiling of grit, combined with investment in new technology, means that local authorities will be able to tackle icy road conditions before they become potentially dangerous for drivers."


Hazardous conditions
Some schools in Shropshire are closing early on Friday because of the snow that is forecast. The decision came after a severe weather warning from Shropshire County Council. On Thursday a 45-year-old lorry driver died on the M6 near Tebay, Cumbria, as his lorry overturned in 70 mph gusts. And a ferry which got into trouble in the Irish Sea ran aground at Blackpool. Fourteen passengers had to be airlifted from the ferry, named Riverdance, but the crew of nine remained behind. In Wales some homes were left without power and the Forth Road Bridge, west of Edinburgh, was closed after a lorry earlier overturned in high winds. The Port of Dover in Kent closed for a time after gusts of up to 60mph forced it to close.

Caution urged
About 1,000 homes were left without power on Thursday in Gwynedd and two schools, John Beddoes High in Presteigne and Whitton Primary schools in Powys, closed because of a power failure. In Moseley, Birmingham, a baby girl had to be taken to hospital after a strong gust knocked her and the pushchair she was in into a lake. The AA advised motorists to prepare for journeys by checking local traffic and weather reports. A spokesman said: "Where possible, motorists should postpone car journeys until the weather clears, but those who do need to be out on the roads may find they need to cope with weather related hazards. "Decreased visibility is one of those, so make sure you de-mist before you set off."

A roll-on roll-off ferry which ran into trouble in high winds in the Irish Sea has run aground off Blackpool. The Maritime and Coastguard Agency said 14 people were flown to safety from the Riverdance, after it was hit by a freak wave in bad weather. Nine crew members were still on board when it ran aground on the north shore of Blackpool beach. They were also rescued later and flown to safety. Riverdance owner Seatruck Ferries is trying to salvage the vessel. A spokesman for Seatruck Ferries said: "The conditions are such that the master requested helicopter transfer of all personnel. "All nine (crew members) are now safely off." He added: "The issue was that as we approached high water the vessel started to rotate broadside on the beach. "The high swell caused a list and, under those circumstances, the master decided safety came first."

A trawler with 14 crew on board has been driven aground in gale force winds and high seas on the Scottish island of St Kilda.

The crew was unable to launch its life rafts due to the poor conditions. Those on board are due to be airlifted off by a coastguard helicopter.

The trawler, the Spinningdale, is said to be aground on rocks.

Lifeboat crews and coastguard teams have also been alerted and are expected to be involved in the rescue.

Two other vessels are reported to be near the stricken trawler.

A second helicopter, the RAF Sea King Rescue 137, has been scrambled and is on standby to assist in the rescue operation if required.

Snow is expected to fall in many parts of Britain, with strong winds causing blizzards in parts of Scotland. Bad weather preparations have been launched across the North East of England and East Anglia which are also predicted to see plenty of snow.

It comes as rescuers airlifted 23 passengers and crew from a ferry which ran aground at Blackpool in high seas. Motorists across the country have already been hit by high winds which have caused several accidents. 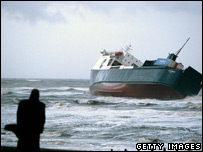 The ferry rescue was filmed from an RAF helicopter

Council gritters in many parts of England have been out overnight to try to combat the effects of the snowfall. BBC forecaster Tomasz Schafernaker said Scotland could expect gales and 20cm to 30cm of snow across the hills, but added "this is not unusual" for the region.

There will be snow in the North East of England as well as Yorkshire and Cumbria starting around lunchtime. Later in the day the snow will reach Lincolnshire and East Anglia. The rest of the UK will have a mixture of wintry flurries and sunny spells. 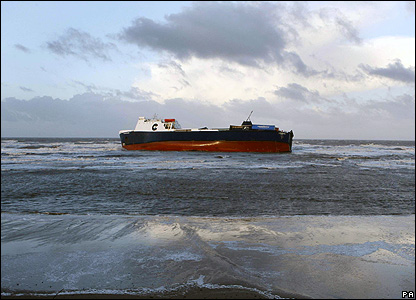 The ferry Riverdance ran aground off Blackpool after being hit by a freak wave. Twenty-three passengers and crew were airlifted to safety by coastguards. 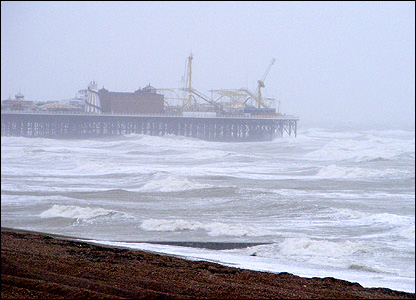 Reader Tony Woodley took this picture of Brighton Pier in stormy weather. He reports that it was almost impossible to stay standing 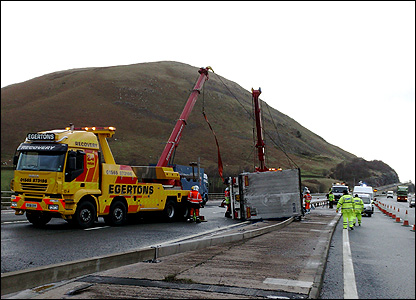 This photo by Mark Smith shows efforts to recover a lorry after a fatal accident caused by high winds. The driver died when his lorry overturned near Tebay in Cumbria. 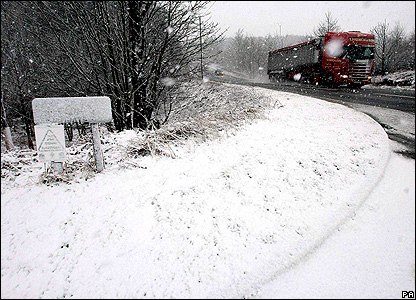 Snow on the A68 near Slaly in Northumberland. Forecasters say the snowfalls are now moving south. 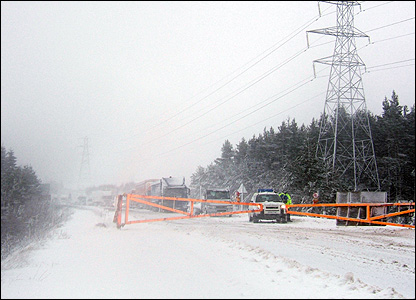 Aaron Sneddon sent in this photo of lorries stuck in the snow at Ralia, south of Newtonmore. Police closed barriers on the A9 due to heavy snow. 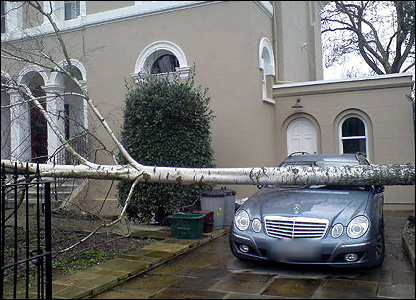 Vee Kelly sent this photograph, showing a tree which had been blown over on a car in Islington, north London 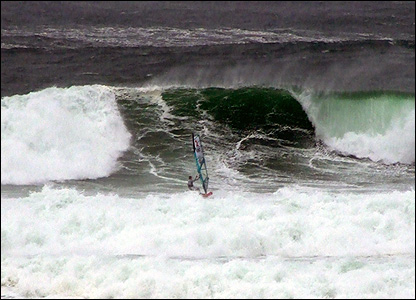 Reader Tam Mullen took this picture of his brother windsurfing off the north-west coast of Ireland. He says they seek out storms like this for better waves 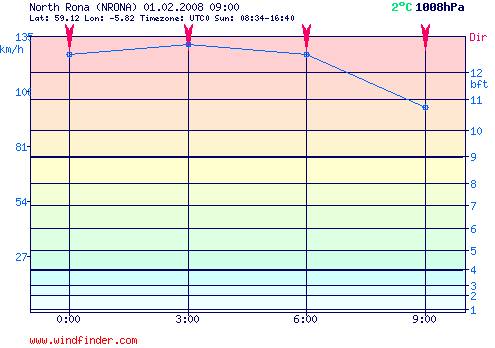 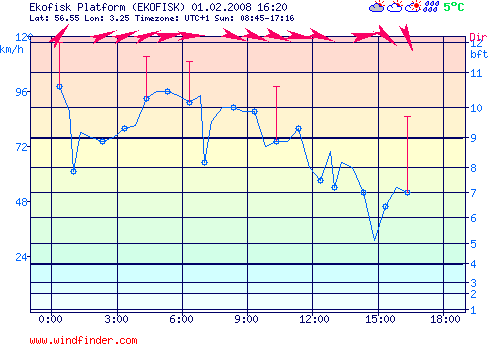 A van abandoned on the A68 near Castleside, Co Durham
Vehicles have been abandoned on roads in northern England
Severe weather and heavy storms have been battering much of the UK, causing disruption and delay for travellers.

Durham police have launched a rescue operation after at least 150 motorists became stuck in snow on the A66.


Vehicles have been abandoned on roads in northern England

Earlier crew and passengers had to be rescued from two ships that got into trouble off the coast of Blackpool and on one of the islands of St Kilda.

Blizzards have affected much of Scotland and northern England, with snow recorded as deep as 15cm (5.9ins).