PAGE, Ariz. - Federal agencies on Wednsday released a manmade flood aimed at refreshing the ecosystem of the Grand Canyon. A three-day torrent of water from Glen Canyon Dam on the Arizona-Utah state line began Wednesday morning. The Colorado River in the Grand Canyon downstream from the dam used to be warm and muddy. But the dam now traps silt and the river runs cold and clear through the canyon. The shift has helped speed the extinction of four fish species. The agencies including the Interior Department and Park Service hope the flooding will redistribute sediment in the canyon. The Glen Canyon Dam, completed in 1963 upstream from the Grand Canyon, permanently changed the Colorado River, transforming it into a cooler, clearer, tightly controlled water-delivery system. Without spring floods to flush the system and help rebuild beaches and fish habitat, native species suffered even as non-native fish thrived. The shift helped speed the extinction of four fish species and push two others, including the endangered humpback chub, near the edge.

First artificial flood in '96
In 1996, the government staged the first artificial flood in the canyon, opening Glen Canyon Dam's bypass tubes for several days in an attempt to replicate natural cycles. A second test in 2004 taught scientists the importance of sand and sediment. The dam traps almost all the sediment that once flowed down the river, which is why beaches and habitats have eroded. A good monsoon season can wash significant quantities of sand down the Paria and Little Colorado rivers, which empty into the big Colorado below the dam. The flood will scour and reshape miles of sandy banks on the floor of the Grand Canyon. Flows in the Grand Canyon will increase to 41,000 cubic feet per second for nearly three days — four to five times the normal amount of water released from the Glen Canyon Dam. What scientists and environmentalists want to see is what will happen to the fish and the canyon when the gates close at dam and the staged flood recedes. Federal officials insist they have progressed with long-term plans to offset the effects of the dam on the river and the Grand Canyon. The chub, the fish at the center of much of the dispute, has recovered some of its lost numbers since the last flood. Scientists also think they better understand when to trigger future floods. "Our ultimate purpose is to learn whether or not this is a viable strategy for creating sandbars and habitats for native fish," said John Hamill, chief of the Grand Canyon Monitoring and Research Center, part of the U.S. Geological Survey.

Activists want permanent plan
Environmental groups argue that the flood again delays long-term changes to the river's management, further jeopardizing the canyon's health. They want federal officials to permanently alter the dam's operation instead of repeating the same test, adopting a seasonally adjusted plan that better mimics nature. Nikolai Lash, senior program director for the Grand Canyon Trust, a group that has long fought the government over its management of the dam, said the flood was hastily planned after the trust sued the government last year for failing to protect the river. He said the experiment was purposely designed as a single test, even though most scientists think floods must occur regularly. "They're trying to make it appear that they're doing something beneficial when they're just doing it for appearances," he said. "It's being manipulated to be a 'one and done,' even though we know that doesn't work." 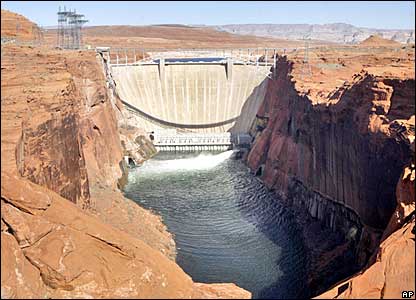 Water is unleashed from Glen Canyon Dam towards the Grand Canyon in the United States - an experiment to mimic natural floods and recharge the ecosystem. 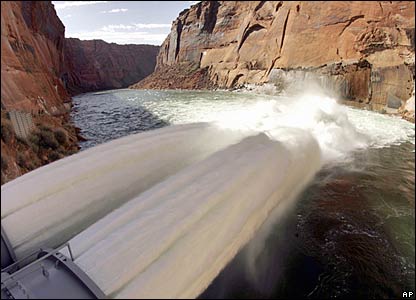 More than 300,000 gallons (1.1m litres) of water per second gushed from giant steel tubes into the river - the equivalent of turning on 1.3m garden hoses simultaneously. 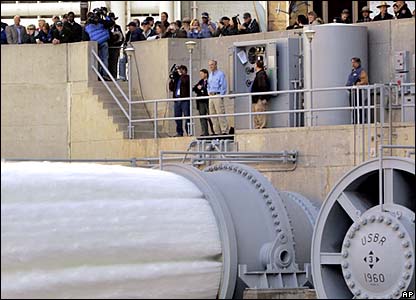 US Secretary of the Interior Dirk Kempthorne, in the blue shirt at the railing, released the valves. He said the volume of water could fill the Empire State Building in 20 minutes. 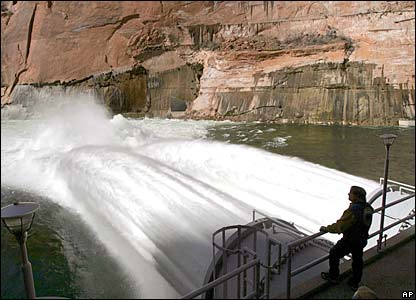 The manmade flood will carry rich sedimentary residue to nourish the Grand Canyon area, improving the fish habitat in the river and rebuilding beaches 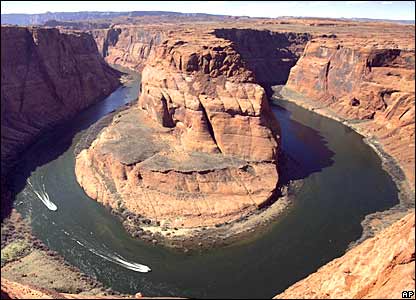 Water levels along the Colorado river rose quickly after the flood was released. Since the dam was built in 1963, 98% of the sediment carried by the river has been lost. 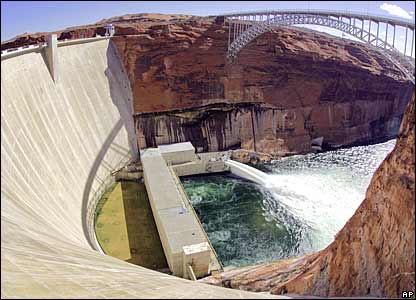 Before then the river, near the Arizona-Utah border, was muddy, and natural flooding built up sandbars essential to native plant and fish species. 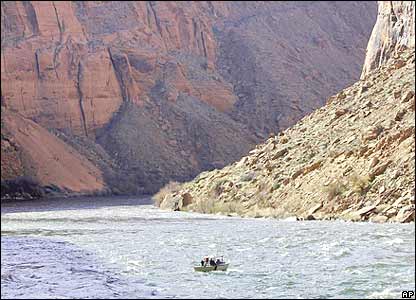 After the flood ends on Friday, it is hoped the water will leave behind sediment, and restore sandbars, as it goes back to normal levels.