Wildfires were scattered around Northern California on Sunday in the heart of wine country and in remote forests, the latest in what has become an unusually destructive year. State officials said lightning started more than 500 fires during the weekend. One had spread across 5.5 square miles by early Sunday, after starting Saturday afternoon in Napa County and quickly moving into a mostly rural area of Solano County. 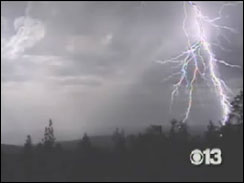 The fire threatened more than 100 buildings as it fed on grassy woodland about 40 miles southwest of Sacramento, said Roger Archey, a spokesman for the California Department of Forestry and Fire Protection, or Cal Fire. It was 10 percent contained Sunday morning and had destroyed one home, Archey said. A mandatory evacuation had been ordered for some residents, said agency spokeswoman Nancy Carniglia.

Wildfires have destroyed at least 125 homes in Northern California so far this year. Blazes started popping up in the region just as California's unofficial fire season began in mid-May, following the state's driest two-month period on record. Thunderstorms were responsible for as many as 75 fires in Shasta-Trinity National Forest, about 160 miles north of Sacramento. They ranged in size from less than an acre to more than 750 acres. None immediately threatened homes, said Forest Service spokesman Michael Odle. 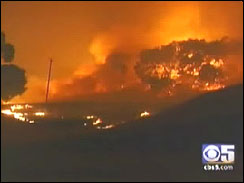 Mendocino County had up to 90 fires, ranging in size up to 125 acres, said Cal Fire officials. South of San Francisco, a fire that destroyed homes and closed a stretch of highway was 90 percent contained after charring 630 acres. Evacuation orders were lifted Saturday, a day after roughly 2,000 people fled their homes. To the south along the coast, a wildfire in a remote part of the Los Padres National Forest in Monterey County was nearly 60 percent contained after charring an estimated 83 square miles.

In New Mexico, hundreds of firefighters battled blazes that had charred more than 100 square miles, including more than 4,000 acres on a ranch owned by media mogul Ted Turner. The largest fire, 20 miles southwest of Hope, New Mexico, was 35 percent contained after charring about 64 square miles.