Britain has enjoyed the hottest day of the year so far, Met Office figures have revealed. 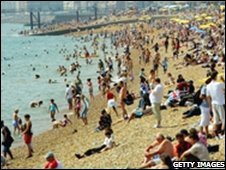 Temperatures reached 28C in many places in the UK

A high of 29.1C was reached at Cranwell in Lincolnshire at 1435 BST - beating the previous UK record for this year by almost 1C.

Temperatures are about 5 degrees above average for this time of year when temperatures normally hit 21C.

The previous record for the year was reached in London on 1 July when temperatures reached 28.2C.

The weather is predicted to stay warm over the weekend with the possible risk of a few showers in places.

Many are expected to flock to the seaside and supermarkets are stocking up on barbecue foods and salads.

One major supermarket said it expected to sell up to 600,000 melons nationwide this weekend and shift up to 800 cucumbers per minute.