A quickly developing weather system has formed into Tropical Storm Gustav -- the seventh named storm of the 2008 Atlantic hurricane season. The system was about 225 miles southeast of Port-au-Prince, Haiti, at 2 p.m. Monday and had maximum sustained winds of 60 mph -- a marked change from the 35 mph winds forecasters observed earlier Monday.

Computer forecast models are inconclusive as to where the storm may head, but the official hurricane center track shows it passing through Haiti on Tuesday and toward eastern Cuba on Wednesday. If it were to continue on its northwest path, Tropical Storm Gustav could affect South Florida by this weekend.

The storm is located just south of where Tropical Storm Fay formed on Aug. 15. It's bigger than Fay was at that point in its development, but Read said atmospheric conditions are ''not quite as pristine'' for Gustav's growth as they were for Fay.

There are a lot of possibilities in what could happen, Read said.

Tropical Storm Gustav reached hurricane strength as it swirled through the central Caribbean and bore down on Haiti on Tuesday, the U.S. National Hurricane Center said. A hurricane hunter aircraft reported the storm's top sustained winds were near 80 mph (130 kph) -- above hurricane strength of 74 mph (120 kph) -- as it approached southwest Haiti. Gustav threatened the impoverished Caribbean nation of 9 million with up to 25 inches of rain in some areas, which could trigger deadly floods and mudslides.

Oil prices rose as Gustav stirred concerns about disruptions to U.S. oil and gas output in the Gulf of Mexico and served as another reminder that this storm season is shaping up to be busier than usual. At least one computer forecasting model showed the storm could enter the Gulf.

A hurricane warning was issued for Haiti west of Barahona, and Dominican President Leonel Fernandez declared a partial state of emergency as the storm began dousing his country's southern coast. Gustav was about 130 miles south-southeast of Port-au-Prince, the Haitian capital, at 2 a.m. (0600 GMT and was moving toward the northwest at near 12 mph (19 kph), the Miami-based hurricane center said.

'INTENSE RAINS'
Haiti is still recovering from Tropical Storm Fay, the remnants of which were causing flooding across the U.S. southeastern states. Fay may have killed more than 50 people in Haiti last week, including dozens missing after floodwaters swept a bus down a river. Forecasters said Gustav could produce rainfall of 5 to 7 inches over Hispaniola, with the possibility of up to 25 inches in isolated areas. "These intense rains may produce life-threatening flash floods and mudslides," the hurricane center said. Haiti is vulnerable to devastating floods because its hillsides have been stripped of trees by people desperate for charcoal to be used as cooking fuel. The official forecast called for Gustav to move to the northwest across Haiti and then south of central Cuba, possibly toward the Gulf of Mexico, but the computer models used to predict the future path of hurricanes disagreed. (CNN) -- Tropical Storm Gustav became a hurricane as it roared toward Haiti early Tuesday, bringing with it the danger of life-threatening flash floods and mudslides

Hurricane Gustav could bring five to seven inches of rain in Haiti and the Dominican Republic, with possible accumulations of up to 25 inches in some places, the hurricane center in Miami, Florida, said.
Forecasters expect the storm to make landfall on Haiti's southern coast Tuesday afternoon.

At 2 a.m. ET Tuesday, the storm had sustained winds of up to 70 miles an hour (110 km / hour). Its center was about 130 miles (210 km) south-southeast of Port au Prince, Haiti, the hurricane center said.
Authorities in Haiti and the Dominican Republic issued hurricane warnings for the southern parts of those countries. The warning covered an area from Barahona, Dominican Republic west to Le Mole St. Nicholas, Haiti, the hurricane center said.

People in Port-au-Prince, Haiti, walk through the rain Monday after Gustav formed quickly in the Caribbean.

Forecasters expect the storm to make landfall in Haiti on Tuesday and hit the southeastern tip of Cuba on Wednesday. They predict it will continue moving to the northwest and say it could dump rain on parts of central and southern Florida by Saturday. Parts of Haiti and the Dominican Republic were battered less than two weeks ago by Tropical Storm Fay. At least 10 people died in Haiti as the storm swept through.

Gustav is the seventh named storm of the Atlantic hurricane season.

Hurricane Gustav was nearing the coast of Haiti with sustained winds of about 85 mph early Tuesday.

The eye of the storm, which already left 22 people dead in Haiti and the Dominican Republic, was expected to pass "very close" to Jamaica later Thursday, the US National Hurricane Center said.

(CBS/AP) Tropical Storm Gustav surged toward hurricane force on Thursday as it drove toward Jamaica and aimed for the Cayman Islands, prompting evacuations of tourists and offshore oil workers. In its wake, impoverished Haitians scrambled for food. Meanwhile, New Orleans kept nervous watch, three years after Katrina's destruction.
Gustav - the cause of flooding and mudslides that killed 23 in Haiti and the Dominican Republic - was nearly stationary about 80 miles east of Jamaica's low-lying capital, but it was expected to run west-southwest later in the day, very close to the shore.
Its top sustained winds were just below hurricane strength at about 70 mph, according to the National Hurricane Center in Miami.

Also Thursday, Tropical Storm Hanna formed in the Atlantic, northeast of the northern Leeward Islands.
It was too early to predict whether Hanna will threaten the United States, but Gustav was already causing jitters from Mexico's Cancun resort to the Florida panhandle. Gustav was projected to become a major Category 3 hurricane over warm and deep Gulf waters, sending oil prices jumping above $120 a barrel Thursday on fears of production slowdowns. 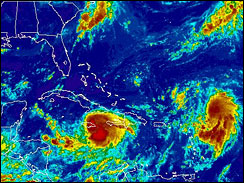 Royal Dutch Shell PLC has evacuated nearly 400 people and said it will pull out another 270 Thursday, affecting production. BP PLC also removed personnel from the region that produces about a quarter of U.S. crude and much of its natural gas. Transocean, the world's biggest offshore drilling contractor, is suspending operations at all of its rigs and pulling nearly 1,600 people out of the Gulf.

Some models showed Gustav taking a path toward Louisiana and other Gulf states devastated by Hurricanes Katrina and Rita three years ago.
Jamaican authorities urged people in rural areas to seek shelter, but businesses remained open early Thursday in Kingston, where a steady drizzle was falling from dark clouds.
Emergency officials opened shelters and sent relief supplies to flood-prone areas.
Gustav hit Haiti as a hurricane on Tuesday, causing floods and landslides that killed 15 people on Haiti's deforested southern peninsula, where it dumped 12 inches or more of rain. A landslide buried eight people, including a mother and six of her children, in the neighboring Dominican Republic.

Gustav's projected track pointed directly at the Cayman Islands, an offshore banking center where residents boarded up homes and stocked up on emergency supplies.
Forecasters said Gustav might slip between Mexico's Yucatan Peninsula and the western tip of Cuba on Sunday, then March toward a Tuesday collision with the U.S. Gulf Coast - anywhere from south Texas to the Florida panhandle.
"We know it's going to head into the Gulf. After that, we're not sure," said meteorologist Rebecca Waddington at the National Hurricane Center. "For that reason, everyone in the Gulf needs to be monitoring the storm."

"A bad storm churning in the Gulf could be a nightmare scenario," said Phil Flynn, an analyst at Alaron Trading Corp. in Chicago. "We might see oil prices spike $5 to $8 if it really rips into platforms."
Haiti and the Dominican Republic were still getting heavy rain Thursday, and rising waters damaged many homes.
CBS News producer Portia Siegelbaum in Havana reports Cuba is closely watching Gustav but as the stormâ€™s center shifted the focus has switched to the western provinces.
Cuban radio reported â€œinsignificant rainfallâ€ in eastern Cuba -- although there was flooding in Holguin -- but urged residents of the Isle of Youth south of Havana Province and the westernmost province of Pinar del Rio to stay informed.
Nearly 50,000 people had been evacuated from low-lying areas in eastern Cuba.

In the low-lying Cayman Islands, where Gustav is expected to hit Friday, tourists flocked to the airport to get out before the storm.

Stacey McLaughlan of Albany, New York, said she and her husband were told to leave their resort by noon Thursday or prepare to move to a public shelter.
Cayman Airways pilot Chris Witt says a lot of evacuation flights are planned for Thursday, but McLaughlan said she and her husband had to pay an extra $1,000 to get out because their airline refused to bring in a plane to return them to the U.S.

Finding affordable food was an immediate priority for many in Haiti. Jean Ramando, an 18-year-old banana grower, said winds tore down a dozen of his family's banana trees, so bushels of 60 bananas they once sold to Port-au-Prince markets for 135 gourdes ($3.55) would have to be moved at prices as high as 300 gourdes ($7.80).

"The wind blew them down quickly so we need to make some money quickly," he said as he carried bushels through floodwaters.
In the Dominican Republic, friends and relatives buried a mother and six of her seven children, smothered when a landslide crushed their tin-roofed shack.

Marcelina Feliz, 32, was found hugging the body of her smallest child, rescue officials said. A neighbor was also killed.
"I don't know how I can live now, because none of my family is left," said Marino Borges, her husband and father of several of her children.

Residents watch a bridge that collapsed due to heavy rains caused by Tropical Storm Gustav in Kingston, Jamaica, Friday, Aug. 29, 2008. Gustav ripped off roofs, downed power lines and pounded rain into Jamaica, triggering landslides and flooding but no reported deaths. The death toll rose to 67 in Haiti and the Dominican Republic, where Gustav caused dangerous floods.


A truck is trapped in mud caused by heavy rain brought by Tropical Storm Gustav in Fond Parisien village in Haiti, Thursday, Aug. 28, 2008. Gustav moved away from the island of Hispaniola, where it killed 59 people in Haiti and the Dominican Republic, and inched toward Jamaica to the west. Forecasters predicted it would hug Jamaica's southern shore before making a near-direct hit on Grand Cayman.


People walk by a street flooded by heavy rains caused by Gustav Hurricane in Port-au-Prince, Haiti


A man pushes his car through a flooded street during heavy rains caused by the approaching of Gustav Hurricane in Havana, Tuesday, Aug. 26, 2008. Forecasters said Gustav should slice along the southern coast of Cuba all week and grow into a perilous Category 3 hurricane with 120 mph winds before entering the central gulf on Sunday.

Gustav's top winds increased to 100 mph (155 km/hr) Saturday, making it a Category 2 storm as it approaches the western tip of Cuba, according to the National Hurricane Center in Miami, Florida. Forecasters warn Gustav could grow to be a Category 4 hurricane on the Saffir-Simpson Scale as it barrels toward the U.S. Gulf Coast for a landfall late Monday or Tuesday, although they predict it would weaken to a Category 3 storm before reaching land. More...