Tropical Storm Hanna has formed northeast of the northern Leeward Islands in the Atlantic, the National Hurricane Center said Thursday. The eighth tropical storm of the Atlantic season had top sustained winds near 40 mph Thursday. Its center was about 305 miles northeast of the northern Leeward Islands and was moving toward the west-northwest at roughly 12 mph. Hanna could produce rainfall of 1 to 4 inches across parts of the Leeward Islands. It's too soon to say if Hanna will affect the United States.

While powerful Hurricane Gustav bore down on the U.S. Gulf Coast on Sunday, Tropical Storm Hanna swirled east of Florida, embedded in a complicated climatic environment that made it impossible to forecast its destination and likely strength.

The eighth tropical storm of the 2008 Atlantic hurricane season could just as easily end up over Cuba, bring heavy rainfall to citrus country in central Florida or drift northward toward South Carolina. It was not possible to say if the storm might eventually end up in the U.S. oil patch in the Gulf of Mexico, hurricane experts said. Unfortunately there is still considerable uncertainty with the forecast, said Jamie Rhome, a hurricane specialist at the U.S. National Hurricane Center in Miami. It's impossible to say that this system is going to do this or that. The cyclone was tangled up in a middle to upper level low that was making it difficult for Hanna to develop, and was likely to slow down in two days when it came across conditions of weak steering current that could make it meander.

Another trough would then swoop over the tropical storm, bringing with it considerable uncertainty as to the likely wind shear as Hanna drifted near the Bahamas. Wind shear -- the difference in wind speed at different levels of the atmosphere -- can tear storms apart.

At the end of the forecast track the wind shear could let up a bit, Rhome said. None of the computer models used to predict storm tracks actually took Hanna into the southeastern United States at this point, Rhome said.

Some oil analysts reported on Friday that one of the myriad computer models available to forecasters had indicated that Hanna could eventually make landfall on the U.S. Gulf Coast near New Orleans where Hurricane Gustav was expected to come ashore on Monday as a dangerous storm. More

Landfall possible next week between Miami and N.C. Outer Banks

Tropical Storm Hanna is seen at bottom right, while Hurricane Gustav is at left in this satellite image from Sunday.

PROVIDENCIALES, Turks and Caicos - Tropical Storm Hanna brought battering waves, rain and blustery winds to this island chain on Monday, closing the main airport and schools and clearing the streets. Forecasters warned that it could become a hurricane and strike the U.S. mainland.

"Right now, the uncertainty is such that it could hit anywhere from Miami to the Outer Banks of North Carolina," said Jessica Schauer Clark, a meteorologist at the National Hurricane Center. "So people really need to keep an eye on it."

Tropical storm warnings were posted for the Turks and Caicos and the central and southeastern Bahamas, and the U.S. National Hurricane Center said the eighth named storm of the Atlantic hurricane season was likely to become a hurricane by midweek.

At 11 a.m. ET, Hanna had top sustained winds near 60 mph with higher gusts, and was centered about 40 miles north of Mayaguana Island in the southeastern Bahamas, moving west-southwest near 5 mph.

Hanna was expected to bring up to 12 inches of rain to the Turks chain, where the first day of school was canceled Monday and most businesses were closed. Streets were deserted and some were flooded in the capital of the popular tourist destination, which has a population of about 22,000.

Tourists Jason and Carolina Volpi were out of luck as they tried to leave. The Providenciales airport was shut down and all flights were canceled. They couldn't get seats out until Thursday, too late to attend business meetings back in Italy.

"The situation is very frustrating," Jason Volpi, 36, said as they waited under darkening skies for a taxi back to their hotel.

Hanna comes just after Gustav killed 94 in the Caribbean on the way to the U.S. Gulf Coast. Most of the deaths were in Haiti, followed by Jamaica and the Domincan Republic. The Cayman Islands and Cuba were hit hard but apparently escaped without any loss of life.

The European Union said Monday it would give $2.9 million to Caribbean residents made homeless by Gustav. The money will pay for clean water, food, medical care, shelter and basic household items in Haiti, Cuba, Jamaica and the Dominican Republic. In Haiti alone, some 8,000 people are in temporary housing after high winds and floods destroyed homes and farms. 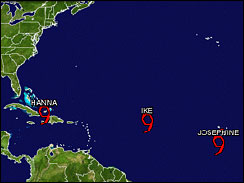 A new tropical storm has formed in the eastern Atlantic to make a total of four named storms currently at large.
The National Hurricane Center says Josephine is the 10th named storm of the Atlantic hurricane season.

Josephine has top sustained winds near 40 mph and is moving west at 15 mph. It could be near hurricane strength on Wednesday or Thursday.
Newly formed Tropical Storm Ike was cruising westward across the Atlantic and was projected to near the storm-weary Bahamas by Sunday. It had winds of 50 mph and was expected to grow stronger.

And Hurricane Hanna slumped to tropical storm strength while grinding away at the Bahamas and other Atlantic islands on Tuesday, and forecasters said it still poses a hurricane threat to the U.S. East Coast.
The storm snapped trees and kept Providenciales, capital of the Turks and Caicos islands, without power. It hurled rains that caused flooding across Cuba, Haiti and Puerto Rico, where at least one person died in a rain-swollen river.

Hanna's maximum sustained winds slipped to 70 mph but the U.S. National Hurricane Center in Miami said it could regain hurricane strength of 74 mph within a day. Forecasters say it could hit the U.S. coast by Friday or Saturday.

"It is important to note that Hanna is expected to continue to intensify" before it hits land, the U.S. National Hurricane Center said Tuesday morning. "Hanna could be a major hurricane."
Forecasters said the storm could hit the U.S. anywhere from Florida to North Carolina - and projections indicated it could then spread rain into the Northeast even after it weakens. 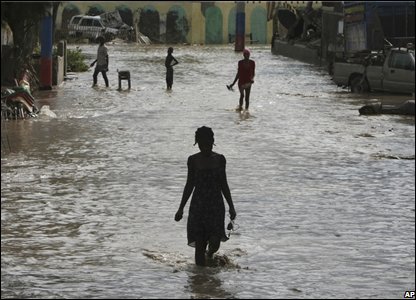 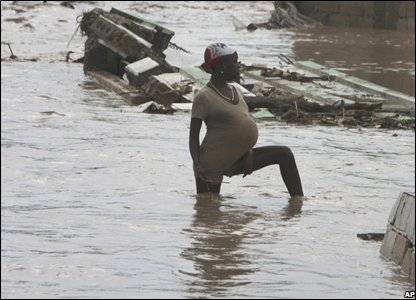 A pregnant woman stands in a flooded street in Gonaives 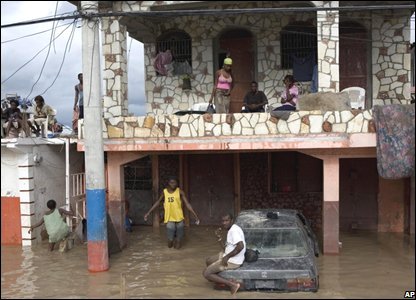 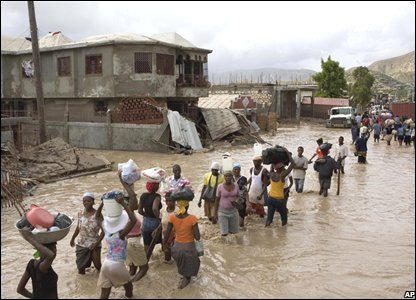 Some parts of the country are under several metres of water, and in some cases residents
have been forced to climb onto roofs 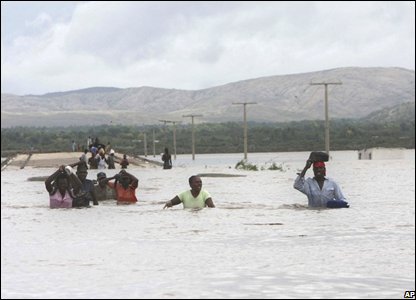 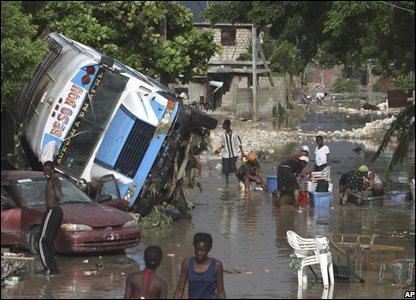 UN peacekeepers and aid workers have struggled to reach stranded survivors and say they
cannot rescue anyone because of the severity of the damage. 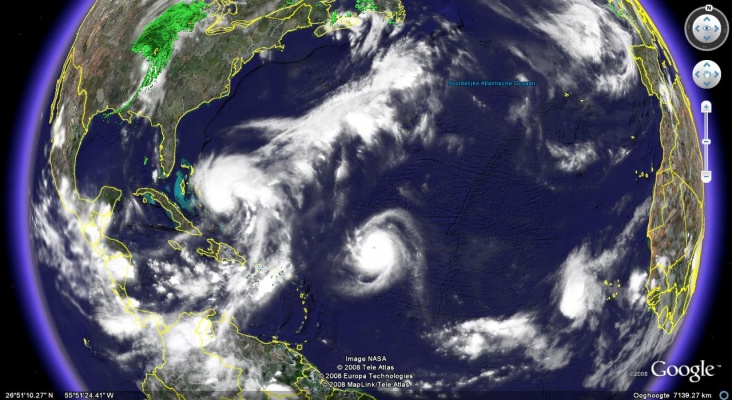