The 11th named storm of the Atlantic hurricane season has formed, the National Hurricane Center said Thursday. Tropical Storm Kyle formed south of Bermuda in the Atlantic and by Thursday afternoon had maximum sustained winds near 45 mph.

It was centered about 645 miles south of Bermuda and is moving north at about 8 mph. Forecasters expect the storm to continue in that direction and strengthen over the next couple of days. Forecasters had predicted the season, which runs through Nov. 30, could be above average, with up to 18 named storms.

The warm sea temperatures, low wind shear and other factors that contribute to the formation of hurricanes are still in place. Moreover, El Nino, the eastern Pacific warm water phenomenon that can dampen Atlantic storm formation, has not developed. Neutral El Nino conditions are expected for the rest of the season, experts said.

Tropical Storm Kyle could strike the north-eastern United States coast and Canada as a hurricane by Monday (local time), according to National Hurricane Centre (NHC) forecasts. On Friday (local time), Kyle was still far away from land, its centre swirling about 715 kilometres south-east of Bermuda and travelling towards the north-west at 19 kilometres an hour.

The storm is packing winds of 95 kilometres per hour, the Miami-based centre said. Additional strengthening is forecast during the next 48 hours and Kyle could become a hurricane by Saturday night, the NHC warned.

Interests in the north-eastern United States and the Canadian maritime region should closely monitor the progress of Kyle during the next couple of days, the NHC said. The Hurricane Centre has issued a tropical storm watch for Bermuda, though it forecasts that Kyle's strongest winds would remain west of the island. 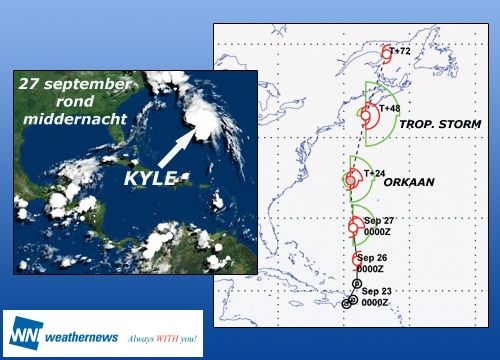 Tropical Storm Kyle strengthened to near hurricane force over the Atlantic Ocean on Saturday as it swirled on a path toward landfall between Maine and Canada's maritime provinces, U.S. forecasters said. Kyle, which formed on Thursday, had sustained winds near 70 mph as it swirled over the Atlantic and could become a minimal Category 1 hurricane on the five-step hurricane intensity scale any time on Saturday, the U.S. National Hurricane Center said.

It said a hurricane watch was in effect for the coast of Maine, from Stonington to Eastport, meaning that residents should brace for hurricane conditions there. At 11 a.m. EDT (1500 GMT), the 11th named storm of the Atlantic hurricane season was located about 280 miles west of Bermuda and moving to the north-northwest at about 15 mph, the Miami-based hurricane center said.

On its current track, Kyle is expected to be centered near eastern New England or the Canadian maritime provinces by late on Sunday, the hurricane center said. The storm is expected to make landfall anywhere from Maine to Nova Scotia early on Monday. The disturbed weather system drenched Puerto Rico, the Virgin Islands and Hispaniola earlier this week before moving north into the Atlantic. Authorities in Puerto Rico said at least four people were killed and scores of homes were flooded.

Kyle was the first tropical storm to form in the Atlantic-Caribbean region since Tropical Storm Josephine on September 2, a lengthy lull in what has been a busy and destructive hurricane season so far. Forecasters have predicted the six-month season, which runs through November 30, could produce up to 18 cyclones and the warm sea temperatures and other factors that contribute to the formation of hurricanes are still in place.

Fishermen moved boats to shelter from a rare burst of tropical weather along Maine's rugged Down East coast Sunday as Hurricane Kyle plowed past on its way to Canada, threatening a glancing blow equivalent to a classic nor'easter storm without the snow. 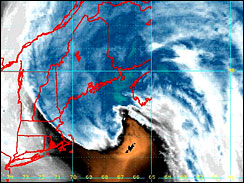 HurricaneKyle, a Category 1 storm, off the Northeast coast. (NOAA)

A hurricane watch for Maine was discontinued Sunday but a tropical storm warning remained in effect from Stonington, at the mouth of Penobscot Bay, to Eastport on the Canadian border, the National Hurricane Center said. The Canadian Hurricane Centre issued a hurricane warning for parts of southwestern Nova Scotia, with tropical storm warnings for parts of New Brunswick and Nova Scotia.

The Category 1 storm's track was expected to bring its center ashore in New Brunswick just west of Saint John late Sunday or early Monday, but by then it is expected to have less than hurricane strength, said Peter Bowyer of the Canadian center in Dartmouth, Nova Scotia.
There were no immediate plans for evacuations in Maine, although residents were warned of potential power outages and interruptions in ferry services to islands.

Heavy rain lashed the state Sunday for a third straight day. As much as 5.5 inches had already fallen along coastal areas. Flood watches were in effect for the southern two-thirds of New Hampshire and southern Maine through Sunday evening.
Authorities expected wind gusts in Maine to reach up to 60 mph and waves up to 20 feet, said Robert McAleer, Maine Emergency Management Agency director.

Down East residents are accustomed to rough weather, but it most often comes in the winter when nor'easters howl along the East Coast. Maine hasn't had anything like a hurricane since Bob was downgraded as it moved into the state in 1991 after causing problems in southern New England.
While residents took precautions, many weren't impressed by Kyle.

"It probably won't be much different than a Nor'easter except we don't have to deal with the snow," said Jesse Davis of Marshfield, who planned to ride out the wind and rain at home with his wife and 2-month-old daughter. He gassed up his vehicles and generator, took in his deck furniture and filled up water jugs, but said that's what he does for any big storm.

"Down East we get storms with 50 to 60 mph winds every winter. Those storms can become ferocious," said Washington County Emergency Management Agency Director Michael Hinerman. Down East is the rugged, sparsely populated area from about Bar Harbor to the Canadian border.

Many lobstermen moved their boats to sheltered coves, said Dwight Carver, a lobsterman on Beals Island. Some also moved lobster traps from shallow water.
"I'm sure we'll have a lot of snarls, a lot of mess, to take care of when it's done," Carver said. "It'll take us a few days to straighten things out."

In Lubec, the easternmost town in the U.S., town workers pulled up docks and fishermen moved boats across the harbor into Campobello Island, New Brunswick, which has coves and wharves that offer shelter.

At 2 p.m. EDT Sunday, Kyle was centered about 225 miles southeast of Portland, Maine, and about 230 miles southwest of Halifax, Nova Scotia, the National Hurricane Center said. It was moving toward the north-northeast at roughly 24 mph and was expected to continue that track for the next day or so.

Kyle's maximum sustained wind was blowing at nearly 80 mph, with hurricane-force wind of at least 74 mph extending up to 70 miles out from the center.
Emergency Measures officials in New Brunswick were concerned that people living inland were not taking the storm warnings seriously enough.

"We're talking to people on the street and they're shrugging this off," said spokesman Ernie MacGillvray.
He noted that the storm system was hundreds of miles wide. "They need to understand there's going to be a whole bunch of impact and it could be a few days before phones and power is restored," MacGillvray said.

The deadliest storm to hit the Northeast was in 1938 when a hurricane killed 700 people and destroyed 63,000 homes on New York's Long Island and throughout New England. Other hurricanes that have hit Maine were Carol and Edna in 1954, Donna in 1960 and Gloria in 1985.

A hurricane watch means hurricane conditions, with wind of at least 74 mph, are possible within 36 hours. A tropical storm warning means conditions for that type of storm, with wind of 39 to 73 mph, are expected within the next 24 hours. A fisherman in Shag Harbour, on the southwestern tip
of Nova Scotia, prepares for Hurricane Kyle on Sunday.
(Andrew Vaughan/Canadian Press)

The worst of hurricane Kyle was over Monday morning as it was downgraded to a post-tropical storm while heading across southeastern New Brunswick and toward Prince Edward Island.

The storm weakened substantially after making landfall near Yarmouth, N.S., as a Category 1 hurricane on Sunday night said Environment Canada Meteorologist Stephen Hatt.
The area around Shelburne, N.S., bore the brunt of the storm, Hatt said.

There were no reports of injuries or casualties from the storm, which clipped southwestern Nova Scotia with sustained winds of 120 kilometres/hour.

The post-tropical storm was south of Saint John on Monday morning, packing winds gusting between 80 and 110 kilometres per hour.
The storm is also still expected to dump 50 to 100 millimetres of rain on parts of New Brunswick.

Emergency officials in the Maritime provinces are reminding residents that the level of rainfall could cause flash flooding near rivers and streams.
The storm is expected to reach Prince Edward Island by Monday afternoon.
CBC meteorologist Peter Coade said the heaviest rains fall on the west of side of the storm's track and the strongest winds are to the east.

The heaviest damage caused by Kyle in the Maritimes has been to electrical systems.
Crews in Nova Scotia were reporting Monday morning that high winds and fallen trees were hindering the progress of restoring power in the province where about 9,000 people were still without power.

It's difficult to predict when customers without power will get their electricity back, said Glennie Langille, spokesperson for Nova Scotia Power.
In New Brunswick, most customers had their power restored by morning.

Kyle hit the Maritimes almost to the day of the fifth anniversary of Hurricane Juan, which ripped through Nova Scotia in 2003 causing about $150 million in damages, leaving eight dead and thousands without power.