Floods have killed at least 29 people in Ghardaia, an Algerian oasis town in the Sahara, a senior health official has told state radio. 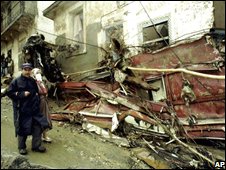 Northern Algeria was hit by deadly floods in 2001

Ali Belkhir, the head of public health at the health ministry, said a further 84 people had been injured.

Interior Minister Noureddine Yazid Zerhouni earlier told the official APS news agency that up to 600 homes had been inundated.
The rains, which began on Tuesday, have cut gas and electricity in Ghardaia.

Ghardaia is one of several fortified Berber medieval settlements on the northern edge of the Sahara, about 600 kilometres (375 miles) south of the capital, Algiers.

Mr Zerhouni said food stocks in the town - home to around 100,000 people - had been flooded and probably made unfit to eat.

Ghardaia is one of several fortified Mozabite Berber medieval settlements in the M'Zab valley, a region listed as a UN World Heritage Site and frequented by European tourists.

Algeria has been hit by several floods in recent years.
A 48-hour deluge in the north of the country in 2001 killed at least 700 people and injured hundreds more.