Recent flood events in Nepal, India and Bangladesh that displaced millions have stoked fears that defences along rivers in the region may not withstand climate change-induced floods, and could result in bigger catastrophes.
Experts say many infrastructures are becoming weaker while the rivers' flows are getting stronger - a classic setting for projected climate change calamities.

Most floods this year were monsoon-related and many would argue they had nothing to do with changes in the climate.
However, the Kosi disaster in eastern Nepal that left millions of Nepalese and Indians homeless was a different story altogether. The devastation was the result of human mistakes.

The embankment along the Kosi was not properly maintained, resulting in it being overrun by the meandering river even when there was no flood.
The event has forced experts to imagine what could happen if rivers like the Kosi swell as the projected impacts of climate change take hold.

"It is entirely possible that some of the existing structures could prove inadequate and possibly dangerous," said Rajendra Pachauri, head of the Intergovernmental Panel on Climate Change (IPCC).
"They might not be able to withstand higher frequency and intensity of floods in the region," he told the BBC.

It isn't just Kosi that has exposed the structures' vulnerability.
The recent monsoon season, which ended last month, also washed away some weaker spots of the defences along other rivers in the region.

Indian media reported that water from the Bramhaputra breached embankments at many key sites in Assam state.
In neighbouring Bangladesh, the Jamuna River also burst through embankments. 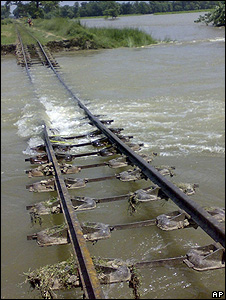 Crumbling embankments are being washed away by floodwater

"In Jamuna, the disaster was Kosi-like," said Ainun Nishat, a water resources engineering professor in the IUCN Bangladesh office.
"Just like in Kosi, the embankment of Jamuna has become weak as many of its sections are still built using sand, so it failed to withstand the pressure and there was flooding."

In western Nepal, smaller rivers - tributaries to Ganga - wreaked havoc, displacing tens of thousands as well as damaging embankments, culverts, and even highways.
By the time these swollen rivers merged into big rivers such as India's Ganga, the scale of the disaster had multiplied.

In Uttar Pradesh state, for instance, nearly three million people in 5,000 districts had been affected.
Relief officials said 7,000 houses in the state had collapsed and 350,000 had been partially damaged.

All of these events happened at a time when "flash floods" and the accompanying deluge were expected, as they are when every monsoon arrives. 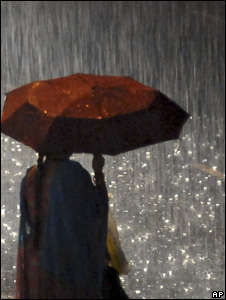 But they give a glimpse of the future impacts projected by climate scientists.
Hydrologists say they have recorded extreme and erratic rainfall patterns that can cause unexpected rises in river flows.
"In Nepal, there has been an increase in the events of rainfall of more than 100mm at a time," says Suresh Sharma, deputy director-general at Nepal's Department of Hydrology and Meteorology.

"Their frequency has gone up by 0.6 days a year in the last three decades."
The same has been observed in other parts of the region as well.
"Earlier events of big floods used to happen [once every] 20-30 years, but in the past decade the frequency is really up; and now it seems it has begun to happen every year," said Nishat.

Warming has triggered rapid glacial melt in the Himalayas; yet another reason identified for the observed recent rise in river levels.
However, the levels are expected to decrease drastically in the long term when the glaciers have withered.

Some time ago, a joint study by the United Nations Environment Programme (Unep) and the Nepal-based International Centre for Integrated Mountain Development (ICIMOD) had warned that 24 glacial lakes in Bhutan and 20 in Nepal were filling up rapidly due to glacier melt and could burst at anytime.
Experts say this is compounded by another problem brewing on the mountains.

They point at the receding snowline that has exposed vulnerable soil to erosion.
"That has triggered more landslides, which means there will be even more flash floods," said Sharma.
More floods would mean more risks to infrastructures such as dams, barrages and embankments downstream.

"Appropriate measures for adapting to the impacts of climate change would certainly involve the establishment or modification of infrastructure to take care of the revised conditions," says Rajendra Pachauri.

"This may be particularly important in the mountain regions of South Asia," he explained.

"Melting glaciers and changes in precipitation patterns would require some engineering structures being constructed, or existing ones modified, to take care of flood conditions that are clearly on the increase in parts of South Asia."

The Kosi embankment in Nepal that breached last August is an example of such structures. It is more than 50 years old.
Nepalese officials also point at the aging defences along the Gandak River, a tributary of the Ganga, that could result in a similar disaster. 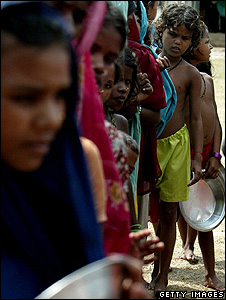 Both embankments, sections of which are in Nepal, were built by India; and under a bilateral agreement, it is supposed to maintain and repair them.

"We are serious about these works," Indian water resources minister Saif-U-Din Soz told the BBC.
"We have flood control as our top priority when it comes to managing water resources together with our neighbours," he said recently, just before Nepal and India signed an agreement on safeguarding measures for both embankments.

But there are many such structures in the region - some of them already in urgent need of repair.
Experts say the safeguards have not developed at the required pace, and this is causing concern.
"The present technology only takes care of water," says Indian flood expert Dinesh Mishra.
"Yet, most problems are caused by the silt the rivers bring along and the [current] technology does not take care of it."

For instance, the Indian government has been working on a massive project that aims to link major river systems.
The basic idea is that water can be transferred from flood prone areas to drought-hit regions. That would again involve a huge infrastructure network.

"Given the state of such infrastructures in the region and given the increasing flood events, the threat is certainly on the rise," says Nishat.

"You therefore need regional planning from mountains to the sea."
In the climate change action plan it launched earlier this year, India hinted it would initiate regional efforts to deal with many of these problems.

Without addressing the issue of weakening infrastructures across and along trans-boundary rivers, such regional efforts could lead to valuable resources needed to strengthen existing defences being invested elsewhere.