A 2,000-acre wildfire whipped by intense winds has forced the closure of a major Southern California freeway. The California Highway Patrol says the Foothill Freeway has been closed this morning in both directions between the 118 Freeway and Interstate 5.

Los Angeles County Fire Captain Mark Savage says Santa Ana winds spurred the blaze to jump a fireline early today and burn toward the freeway and populated areas, most of which have already been evacuated. Savage says fire department helicopters took to the air at about 5 a.m. Monday but had to be grounded amid the wild winds. The blaze 20 miles north of downtown Los Angeles in the eastern San Fernando Valley had forced the evacuation of about 1,200 people.

Fire broke out early Sunday in the Angeles National Forest, destroying a house and three motor homes and prompting the evacuation of about 1,200 residents of 450 homes in the areas of Lopez and Kagel canyons, authorities said.

By Sunday night, the so-called Marek fire, named for Marek Canyon, had burned about 2,100 acres in the area north of Lake View Terrace. It was about 20% contained, officials said. No injuries have been reported, said Sam Padilla, a Los Angeles County Fire Department spokesman. In addition to the house and motor homes, a garage and a shed were destroyed.

Another county fire spokesman, Inspector Frank Garrido, described the fire as "stagnant" Sunday evening and said authorities were "putting a containment line around it." But he said it was not possible to forecast when the fire would be contained fully in light of forecasts for high Santa Ana winds. "The winds could stir up hot spots and stir up this fire," he said.

A red flag warning has been issued through Tuesday evening, meaning that winds could reach 25 mph or more and humidity could drop to 15% or lower. The fear is that wind-whipped embers could spark new fires, Padilla said.

Because "a lot of the terrain is inaccessible," firefighters used water-dropping helicopters in an effort to "take the punch out of the fire," said Paul Hartwell, another county fire spokesman. The evacuation center at San Fernando High School was expected to remain open overnight. An evacuation center for the area's many horses and other animals has been established at the Hansen Dam Equestrian Center in Sylmar.

The Marek fire broke out in the Angeles National Forest near Little Tujunga Road, about 20 miles north of downtown Los Angeles, after 2 a.m. The cause is unknown. Los Angeles County Fire Chief Mike Freeman discounted a rumor that the fire was sparked by gunfire from a nearby range.

Don and Vicky Ecker were among the residents who had evacuated to San Fernando High. They heard helicopters hovering nearby about 2:15 a.m. At 4 a.m., county sheriff's deputies advised them to pack up. It was scary "because we could see those flames shooting up over the canyon," said Don Ecker, a retired Idaho police officer.

When Bill Slocum and his spouse, Brian Gavin, were awakened by their barking dog, Peyton, about 2:20 a.m., they could see a ridge of flames not far from their 12-acre property in Kagel Canyon. A couple of hours later, they grabbed a file of important papers, their two cats and Peyton and headed out. Gavin, president of the canyon civic association, said residents recognized the fire danger and had cleared brush and set up a phone tree.

Stanton Florea of the U.S. Forest Service said the fire burned south and west in the first few hours, but after daybreak as temperatures started rising, the wind calmed and the fire moved north. About 1,000 county, city and federal fire personnel were called out to fight the blaze. But enough progress had been made that about 200 of them were released Sunday morning.

Seven helicopters and other aircraft dropped mostly water and some retardant. The general area is dry; the last significant rain was May 21, Florea said. In Napa County in Northern California, a 300-acre brush fire near St. Helena that started Friday and destroyed one residence had been fully contained by Sunday morning. Firefighters made gains on Tuesday against two deadly brush fires threatening homes on the fringes of Los Angeles for a third day, as dry, desert-borne winds that had been stoking the flames diminished. The more ferocious of two wildfires at the northern edge of the heavily populated San Fernando Valley doubled in size, to nearly 10,000 acres, as storm-force Santa Ana winds howled through the bone-dry brush of canyons and foothills overnight. 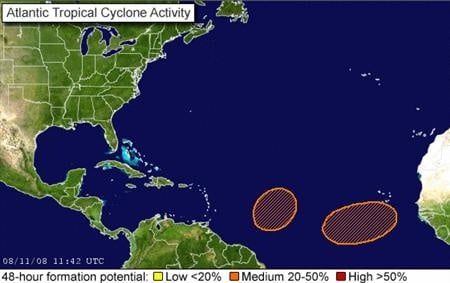 But water-dropping helicopters resumed an all-out air assault on the blaze at daybreak, and by late morning firefighters had managed largely to steer the flames away from housing subdivisions, with the help of dwindling winds. A flare-up briefly menaced one neighborhood, but a hasty stand by ground crews and helicopters kept the blaze at bay.

Still, at least 19 buildings have been destroyed, about 3,000 people remained evacuated from hundreds of homes, and authorities urged residents to remain vigilant. This is the first Santa Ana event of the year, and we're not out of the water yet. We have a long way to go with this fire season, said state Deputy Fire Chief Stan Lake.More.....

At least 100 acres have burned in a wildfire that broke out Wednesday morning amid hot and gusty weather in San Bernardino County, east of Los Angeles. The fire broke out in Fontana northwest of Interstate 15 at about 12:45 Wednesday, and winds in excess of 30 mph were pushing it west into the mountains and canyons of suburban Rancho Cucamonga, about 40 miles northeast of Los Angeles, county fire spokeswoman Angie Samayoa said.

People in about 100 homes near a Buddhist temple have been told they may want to evacuate but are not being ordered to do so, Assistant San Bernardino County Fire Marshall Mike Horton told KABC-TV. "Homes are not directly in the line of fire," Samayoa said.

More than 300 firefighters were on the scene and water drops from aircraft were coming after sunrise, Samayoa said. The fire broke out five years to the day after the beginning of the Grand Prix wildfire, which burned 59,000 acres and destroyed 135 homes in the same area, officials said.