The 17th tropical depression of the 2008 Atlantic hurricane season formed on Wednesday and was expected to strengthen into a storm or perhaps even a hurricane on a path that could threaten the Cayman Islands, Jamaica and Cuba, U.S. forecasters said. The depression, which would be called Tropical Storm Paloma when its top sustained winds reach 39 miles per hour, was 115 miles southeast of Cabo Gracias a Dios on the Nicaragua-Honduras border, at 4 p.m. EST, the U.S. National Hurricane Center said.

The weather system, which formed in the last month of what experts correctly predicted would be a busier than normal Atlantic hurricane season, posed no threat to U.S. oil installations in the Gulf of Mexico, according to computer models. The storm had sustained winds of 30 mph and was moving northwest at about 5 mph, the hurricane center said.

It was expected to move toward the border of Honduras and Nicaragua only briefly before being pulled northward and then northeastward, possibly threatening the wealthy British territory of the Cayman Islands, Jamaica, storm-weary Cuba and the central or southern Bahamas. 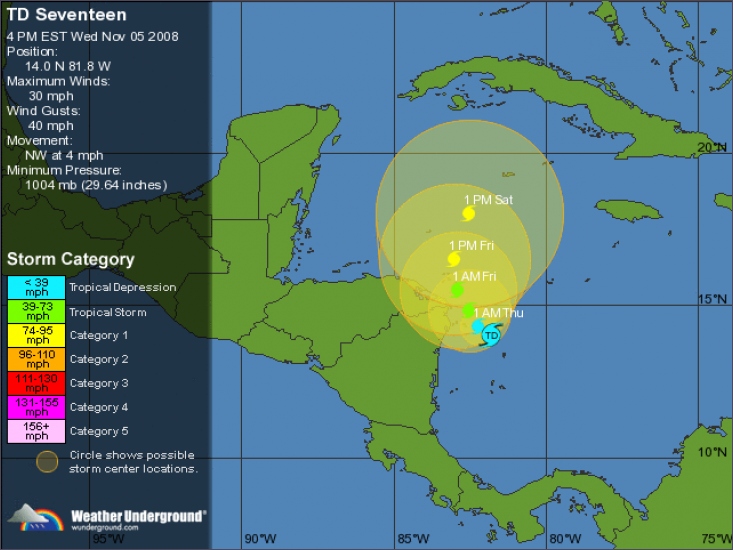 Impoverished Haiti, which is recovering from the ravages of four storms that killed more than 800 people in August and September, is also in the potential path. Computer models varied on the future intensity of the system. Two models called for it to reach "major" hurricane strength, Category 3 on the five-step Saffir-Simpson scale, with sustained winds of at least 111 mph, before hitting Cuba, while another did not even take it to hurricane status.

The hurricane center's official forecast called for it to become a tropical storm within a day, and a hurricane, with sustained winds of at least 75 mph, in two days.

The Atlantic season, which runs from June 1 to November 30, has seen seven hurricanes and eight tropical storms. 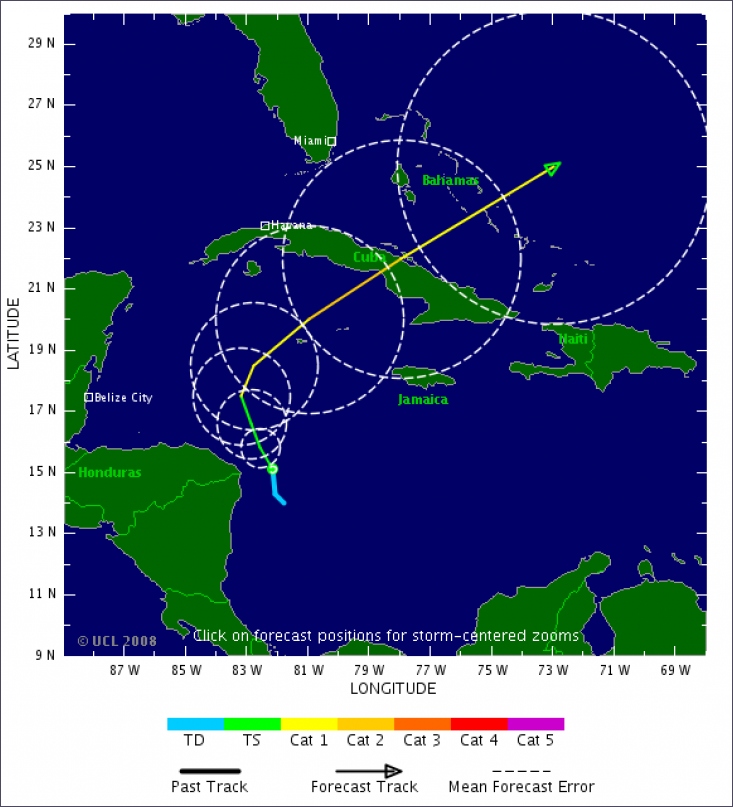 Forecasters say Tropical Storm Paloma is strengthening and turning to the north as it approaches the Cayman Islands and Cuba. The National Hurricane Center in Miami said Thursday the storm could make landfall over Cuba as a hurricane by Sunday. 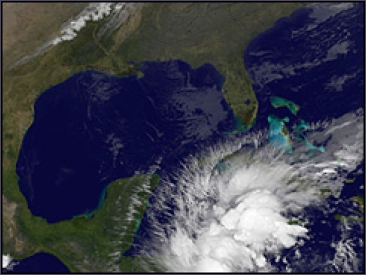 Forecasters say it could turn into hurricane with winds of 75 mph or more later Thursday night or early Friday. It's expected to make a gradual turn to the northeast later Friday or Saturday.

Tropical Storm Paloma strengthened into a hurricane in the Caribbean on Thursday on a path that threatened Cuba, U.S. forecasters said. 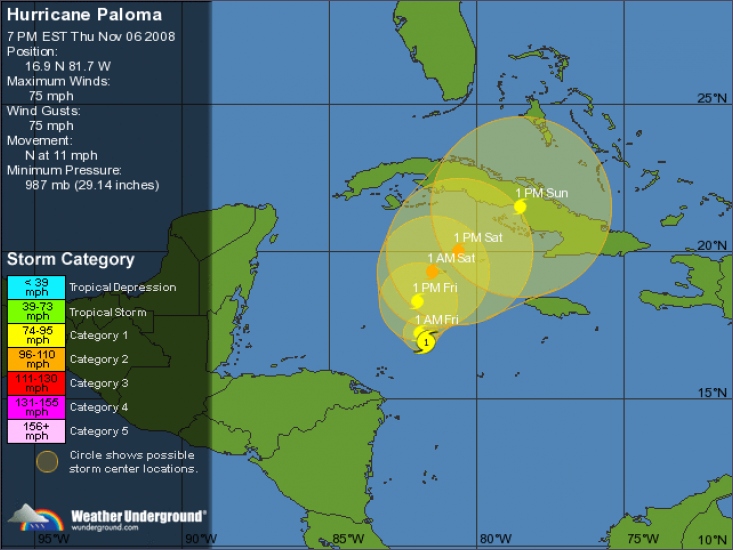 The storm's sustained winds grew to 75 miles per hour (121 km per hour) as it churned 165 miles south of Grand Cayman Island at 7 p.m. EST, the U.S. National Hurricane Center said.

At 5 a.m. ET, Paloma was centered about 110 miles south-southwest of Grand Cayman and about 255 miles west of Montego Bay, Jamaica. The Category 1 storm had maximum sustained winds of 80 mph.
The hurricane was tracking to the north at 9 mph and was expected to continue on that path throughout Friday before gradually turning to the northeast by Saturday, forecasters said.

A hurricane warning is in effect for the Cayman Islands, which means hurricane conditions are expected there within the next 24 hours. The hurricane center warned residents to complete preparations quickly to "protect life and property."
Forecasters said they may issue watches and warnings for Cuba later Friday.
Paloma is expected to drop 5 to 10 inches of rain over the Caymans, with isolated totals of as much as 12 inches possible.

Rainstorms soaked the Cayman Islands on Friday as late-season Hurricane Paloma bore down on the chain of tiny Caribbean islands, triggering a run on stores and plans to shut the main airport.

The Category 1 hurricane was expected to pass over or near Grand Cayman late Friday or early Saturday then gain strength and plow into Cuba, still recovering from two previous hurricanes this season.

Cuba's Communist Party daily Granma, recalling past late-season hurricanes such as a 1932 storm that killed about 3,000 people, said Paloma poses "a potential danger for the island." Before it reaches Cuba on Sunday it could be a Category 3 storm with winds of at least 111 mph, according to the U.S. National Hurricane Center in Miami.

Forecasters expected Paloma to weaken into a tropical storm after crossing Cuba's midsection and steer away from the United States through the Bahamas and into the Atlantic.

The Cayman Islands government urged residents to stay off the streets and began preparing for evacuations in low-lying southern coastal regions. The airport was to close Friday, according to Tourism Minister Charles Clifford, who said extra flights off the island were added late Thursday.

"I hope I'm right, but I don't think this will be a major event," Clifford said. Paloma had winds near 85 mph and forecasters said it was likely to strengthen before reaching this affluent British territory.
It could be a different story for Cuba, still reeling from Hurricanes Gustav and Ike in August and September.

At 10 a.m. EST, Paloma was about 75 miles south-southwest of Grand Cayman, moving to the north at 7 mph and expected to turn to the northeast late Friday.
Cayman Islands Gov. Stuart Jack said Friday that a British Royal Navy ship was on the way and would be available to provide humanitarian assistance if needed.


Paloma became an "extremely dangerous" Category 4 hurricane early Saturday, dumping wind and rain on the Cayman Islands and threatening to strike hurricane-ravaged Cuba as a major storm, forecasters said. The late-season storm had top sustained winds of near 140 mph and was expected to bring total rainfall accumulations of 5 to 10 inches over the Cayman Islands as well as central and eastern Cuba.

The new forecast from the National Hurricane Center in Miami called for Paloma to make landfall in Cuba as a major hurricane late Saturday or early Sunday with maximum-sustained winds of at least 111 mph. Cuba already is suffering from Hurricanes Ike and Gustav, which struck the island earlier this season and together caused an estimated $9.4 billion in damage. 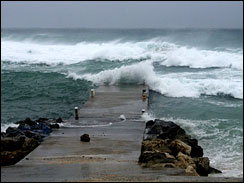 Waves caused by the arrival of Hurricane Paloma crash
over a dock in Spots Bay in George Town along the southern coast of
Grand Cayman, Nov. 7, 2008. (AP Photo/Joanna Lewis)

"It's not like it's new to them, unfortunately," said Dave Roberts, a U.S. Navy hurricane specialist. Cuban official newspaper Granma, recalling past late-season hurricanes such as a 1932 storm that killed about 3,000 people, said Paloma poses "a potential danger for the island."

At 7 a.m. EST, the center of Paloma was just southeast of Cayman Brac and moving toward the northeast near 8 mph. The storm's center was expected to move away from Little Cayman and Cayman Brac on Saturday morning and was about 165 miles southwest of Camaguey, Cuba. 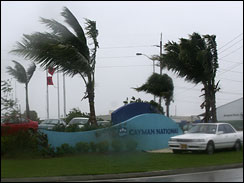 The Cayman Islands government asked all hotels to remove guests from the ground and first floors. Nearly 40 people were already staying in the islands' seven shelters. Water service across Grand Cayman was turned off, and power would likely be cut as the storm neared, hazard management director Barbara Carby said. "We have asked everybody to come off the streets and to be home and safe right now," she said.

Earlier, stranded tourists watched dark clouds gather and saw the storm whip up 10-foot waves from their hotels or beachfront restaurants. "It was a real surprise," said Rick Douglas, 50, of Toronto, who checked weather Web sites before flying to the Caribbean. "It just said there was a tropical depression starting, but I didn't think it would turn into anything serious."

His wife, Susan Douglas, was confident they would be safe as long as they follow orders. "Grand Cayman has been there and done that, so they are prepared," she said. Havana's communist government activated the early stages of its highly organized civil defense system. In central and eastern Cuba, people were advised to stay tuned to state media for news of Paloma's progress and be ready to evacuate. 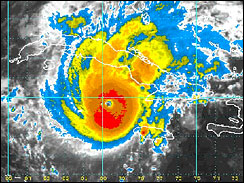 Paloma was aiming toward the central-eastern city of Camaguey, which was particularly hard-hit by Hurricane Ike in September. Ike and Hurricane Gustav, which struck the island in late August, together caused an estimated $9.4 billion in damage. Nearly a third of Cuba's crops were destroyed, causing widespread shortages of fresh produce and prompting authorities to order the planting of vegetable greens and other short-term vegetables.

Forecasters expect Paloma to weaken into a tropical storm after striking Cuba and then steer south of Florida through the Bahamas and into the Atlantic. Cayman Islands Gov. Stuart Jack said Friday that a British Royal Navy ship was on the way and would be available to provide humanitarian assistance if needed. The airport closed Friday morning after extra flights were added to fly out some people late Thursday.

Muniran Charran, a construction worker from Guyana, said he first heard about the storm Thursday night over the radio.
"We didn't really have any time to prepare because the banks and the stores all closed so early today," he said. He was drinking beers with friends in the downstairs lobby of their beachfront apartment complex. "What we've been seeing all day is just a lot of rain and strong winds," Guyana native Shik Khan said. "We hope that when we wake up, everything is fine."

Authorities in Cuba are evacuating tens of thousands of people from low-lying coastal areas ahead of the arrival of Hurricane Paloma.
Forecasters have warned that the category four storm could cause severe devastation from parts of the island that is still recovering from the effects of previous hurricanes.
All of Cuba's central and eastern provinces have been placed on hurricane alert triggering mass evacuations from low lying coastal regions and other flood prone areas.
Hurricane Paloma has picked up speed since sweeping through the Cayman islands where storm surges and torrential rain caused flooding and blackout.
This late season hurricane has risen to an extremely dangerous category four storm with sustained winds of 225 kilometres per hour.
These may ease slightly before making landfall in Cuba late tonight or early tomorrow morning.