A magnitude 6.0 earthquake struck off Indonesia's Sumatra island on Friday, the U.S. Geological Survey said, although there was no tsunami warning or reports of damage or casualties. The quake was centered 141 km (88 miles) south southwest of Bengkulu city at a depth of 35 km, the agency said in a bulletin on its website.

An official at Indonesia's meteorology agency said the quake could be felt in Bengkulu and Lampung provinces in southern Sumatra, but there was no report of damage or casualties. Indonesia suffers frequent earthquakes lying in an extremely active seismic area where several tectonic plates collide.

The sprawling archipelago of more than 17,000 islands was hit by a devastating tsunami four years ago that left an estimated 170,000 people dead or missing in Aceh province. 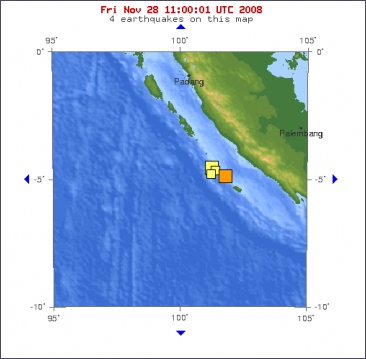