More than 50,000 residents of northern Colombia remained homeless Monday after the rain-swollen Magdalena River broke through dikes and flooded towns and surrounding areas. In the town of Plato, the water flooded 4,000 homes and buildings, leaving 40,000 people homeless, Mayor Jose Rosales Cortina told El Tiempo newspaper. The floodwaters washed away 50 houses, he said. No fatalities have been reported in this weekend's flooding. 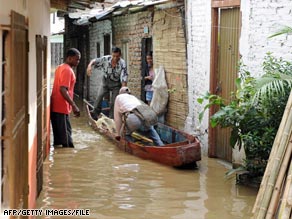 Everything is collapsing the economic system, the health system, public services, Rosales Cortina said in an interview on CNN affiliate Caracol TV. We need help, one anguished woman said on the newscast. Don't you see that the town is totally flooded? We don't have anything in this town. No one helps us here.

The flooding has hit several other riverside cities in Magdalena, one of Colombia's 32 state-like departments. Municipalities in other departments also have been flooded. In Plato, about 560 miles north of Bogota, the Magdalena River broke through a levee Saturday. The suddenness of the flooding surprised many residents. Water reached the rooftops of many homes and power was lost in most of the city.

The water roared. It roared, said resident Noris Padilla. The current took you away. You couldn't hold onto anything. It took away eight houses here. Alvaro Padilla said on Caracol TV that he went underwater to look inside his house, which had water nearly to the roof.

The furniture, the bed, the television, everything is under water, he said. Thousands of homeless residents have taken shelter in hospitals, schools and sports venues. Police in Plato, which has 70,000 residents, have restricted access to the city because of looting. Caracol showed a resident carrying a rifle overhead as he waded through chest-high water. First of all, they steal our electric wiring. They take our roofs. They take all that away. So we have to stay here, the man said, pointing to his weapon.More...