Scientists have photographed "upwards lightning", a rarely-seen phenomenon where electricity from storms flows into the upper atmosphere. During last year's Tropical Storm Cristobal, lightning reached more than 60km (40 miles) up. Also known as "gigantic jets", these events are just as powerful as cloud-to-ground lightning bolts. The US team of researchers also took radio measurements of the electrical charge.

The phenomenon was photographed from a field site near Duke University in Durham, North Carolina. Their work, published in Nature Geoscience, gives scientists a better understanding of this form of lightning. Gigantic jets do not occur during every storm and scientists do not yet know what types of storm are conducive to their formation.

Substantial charge
Lead author Professor Steven Cummer, from Duke, told BBC News: "What we were able to conclusively show is that these are not just sparks that come out of the thunderstorm and travel upward and tickle the upper atmosphere. They actually deliver to the upper atmosphere as much electric charge as the very strong lightning strokes to ground. The jets discharge a comparable amount of electricity to conventional lightning but the charge travels further and faster because the thinner air between the clouds and the ionosphere provides less resistance. 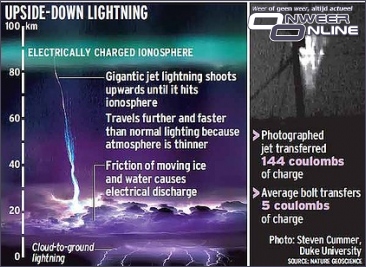 Gigantic jets are rarely photographed because they happen so quickly that cameras have to be trained on them exactly when they occur. Professor Cummer caught the images of the event by chance. He had trained his camera on the sky above the storm, hoping to photograph another phenomenon known as "sprites". These are blue or red electrical discharges above storm clouds.

He is planning to install a low-light, high speed camera to capture colour images of gigantic jets, which could provide information about chemical processes and temperatures. He said: "In fact, this one that we reported came from a tropical storm not quite a hurricane.

"There is another hurricane bearing down on us that is about to hit the eastern seaboard of the US. You can be sure that we will be training our cameras on that, just in case we are lucky."