Two strong earthquakes have hit northern Malawi and southwestern Tanzania, the US Geological Survey (USGS) said, with initial reports indicating no serious damage or injuries. The 6.2-magnitude Tanzanian quake hit 135 kilometres south of the town of Mbeya at a depth of 10 kilometres.

"At 2:23 in the morning (local time) there was an earthquake, but up to this point we have no reports of any damages or injuries," said the regional police commander of Mbeya, Advocate Nyombi. In neighbouring Malawi, which was struck by a series of quakes earlier this month, a 6.0-magnitude quake hit the northern region at 1:19am (local time).

The quake, 15.2 kilometres deep, followed a series of tremors in the same uranium-rich Karonga district. Last week a quake killed a one-year-old and injured two people. Some 3,000 Malawians continue to live in makeshift shelters following structural damage to their homes. The government earlier this week asked for help from the public to help cater for the displaced by providing food, blankets and tents. Output at Kayelekera uranium mine, owned by Australian company Paladin Energy, was not affected by the quakes and production continued as normal.

"There has not been any impact at all. The mine is designed to withstand earth movements greater than what is the current range," said Paladin spokesman Neville Huxman. In 1989, a 6.6-magnitude earthquake killed at least nine people and injured 100 in central Malawi and made 50,000 homeless, according to the USGS.

A strong earthquake has hit Malawi, and a government official says at least 3 people have been killed and nearly 300 injured. The 6.0-magnitude quake struck the southeast African country at 1:19 a.m. Sunday, according to the U.S. Geological Survey.

Gasten Macheka, the commissioner of Karonga district, says it destroyed several buildings there, including schools. He says a dormitory at one government school fell on sleeping students, injuring scores of them.

Macheka says at least 270,000 people have been urged to leave their homes for their safety. The Karonga district in northern Malawi has been hit by a series of earthquakes and aftershocks since the beginning of December. Parts of Malawi that lie in the Great Rift Valley are prone to quakes. 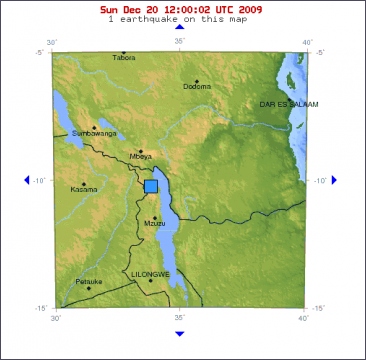