KANSAS CITY, Missouri (AP) -- Residents of the Plains states huddled for cover early Thursday as a major storm system that has killed at least two people moved through the region, bringing heavy snow and tornadoes to some areas.

Severe weather warnings and watches were in effect from South Dakota to Texas, as authorities warned residents to stay alert for tornado warnings.

A husband and wife people were killed Wednesday near Elwood, Oklahoma, when a storm blew apart their home and a large shed, said Dixie Parker, the Beaver County emergency management director.

Weather spotters tracked a series of tornadoes in sparsely populated western Kansas, but there were no reports of significant damage, sheriff's officials from several counties in the area said.

Severe weather was expected to move east across the state Thursday, but was not expected to be as strong as the storms that hit western Kansas Wednesday, said meteorologist David Beusterien with the National Weather Service in Pleasant Hill, Missouri.

At least eleven tornadoes were reported throughout western Nebraska on Wednesday, damaging several homes and farm buildings, emergency management officials said. There were no reported injuries.

A tornado as much as 600-feet wide touched down in Holly, Colorado, on Wednesday, damaging homes and injuring at least two people, authorities said.

Chris Sorensen, a spokesman for Prowers County, Colorado, emergency management, said it appeared people in the area were generally prepared.

"Residents pay attention to those things, and being in a rural area we're familiar with what can happen," he said. "And we always watch the sky."

In Wyoming, a school bus carrying 36 students from Tongue River High School to a competition in Cheyenne in the state's southeast collided with two minivans on snowy Interstate 90 on Wednesday, school officials said.

Soon after, another pileup in the same area involved several passenger vehicles and seven big rigs, two of which were hauling diesel fuel. One of the diesel haulers rolled over and authorities said the other leaked around 1,000 gallons of fuel.

Four people were taken to a hospital, and one injury was considered serious, according to Wyoming Highway Patrol spokesman Sgt. Stephen Townsend. It was not immediately clear which vehicles the injured had been in, but no one on the bus was hurt.

The wintry weather closed a 100-mile stretch of I-90 and 45 miles of I-25. Thirteen other state roads were closed.

At least three people were injured in the Texas Panhandle as storms that brought winds up to 70 mph, hail and rain, spawned several tornadoes.

National Weather Service officials said numerous tornadoes touched down in the Texas Panhandle Wednesday night, including one that was on the ground at Caprock Canyons State Park for about 20 minutes.

While many of the tornadoes were in areas so rural that no damage was reported, others caused damage to homes, downed power lines and uprooted trees. 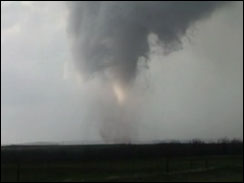 Thar' she blows! A funnel cloud hones in on Silverton, Texas, and the some 750 people who call it home, in this still from a video taken by storm chaser Reed Timmer, March 28, 2007. No injuries were reported in Silverton. (CBS/Reed Timmer)

(CBS/AP) A major storm swept through the Rockies and on east through the Plains states Wednesday, spawning apparent tornadoes in Oklahoma, Texas, Kansas, Nebraska and Colorado, and whipping up snow and hail elsewhere, triggering at least two crashes in Wyoming.

In Oklahoma, at least two people were killed when a tornado roared through a home near Elmwood in Beaver County on the Panhandle, tearing down power lines as it veered toward Texas County.

In Holly, Colorado, two people were taken to hospitals after being injured by an apparent twister that touched down at 8:40 p.m. about a block south of U.S. 50 and moved through Prowers County, damaging a number of buildings.

A tornado warning for parts of Prowers County had been issued by the National Weather Service and it appeared people had taken shelter.

"Residents pay attention to those things and being in a rural area we're familiar with what can happen," said Sorensen, who lives on the plains in nearby Kiowa County. "And we always watch the sky."

In Wyoming, officials say a school bus carrying 36 students from Tongue River High School to a competition in Cheyenne collided with two minivans on snowy Interstate 90.

Soon after, four people were injured, one seriously, in another pileup in the same area involving several passenger vehicles and seven big rigs, two of which were hauling diesel fuel. One of the diesel haulers rolled over and authorities say the other leaked around 1,000 gallons of fuel.

The wintry weather closed a 100-mile stretch of I-90 and 45 miles of I-25. Thirteen other roads in Wyoming had to be closed because of the storm.

In the Plains, the storm generated both hailstorms and twisters.

In Nebraska, tornadoes apparently touched down in rural areas in Perkins, Arthur, Cherry and Sheridan counties, with damage to farm buildings in Ogallala and Wauneta.

Bill Myer of the Nebraska Emergency Management Agency says he's not sure just how many twisters there may have been â€“ or how many reports may turn out to be only high winds.

"Luckily, people are heeding the warnings early this year and taking cover," said Myer, noting that so far no injuries have been reported.

So far, it's the same story in sparsely populated rural western Kansas, where no injuries were reported as apparent tornadoes touched down in Wallace, Greeley, Cheyenne and Sherman counties, inflicting some damage to buildings, trees and fields â€“ causing power outages and disrupting cell phone service.

Storm chasers reported a tornado east of Bird City and another one northeast of Goodland, a few miles from the Colorado border.

In Texas, where two storm systems were at work, the most severe weather was near Lefors, about 65 miles northeast of Amarillo.

The initial band of storms extended from the northeast corner of the Panhandle all the way down to the Amarillo area, said Roland Nunez, a meteorologist for the National Weather Service.

"We're getting reports of tornadic storms, large hail," said Nunez, as he sized up the situation late Wednesday.

Trooper Daniel Hawthorne, a spokesman for the Texas Department of Public Safety, said the storms caused at least two tractor trailers trucks to overturn on Interstate 40 between Groom and McLean.

Twister touchdowns were reported near Palo Duro Canyon and McLean â€“ in open country, in both cases â€“ and power lines were torn down near Clarendon.