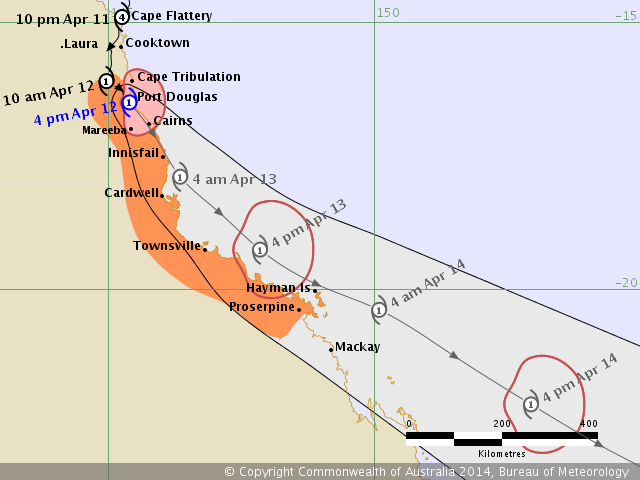 A Cyclone WARNING is now current for coastal areas from Cape Tribulation to Proserpine.

The Cyclone WARNING between Cooktown and Cape Tribulation has been cancelled.

At 4:00 pm EST Tropical Cyclone Ita, Category 1, was estimated to be 8 kilometres west southwest of Port Douglas and 60 kilometres northwest of Cairns, and moving south southeast at 10 kilometres per hour.

Tropical Cyclone Ita is forecast to move to the southeast during the next 24 hours, most likely close to or just offshore of the southern tropical and central coast, and is now expected to maintain tropical cyclone intensity.

As the cyclone tracks near the coast, a storm tide is expected between Cape Tribulation and Cairns. Large waves may produce minor flooding along the foreshore.  People living in areas likely to be affected by this flooding should take measures to protect their property as much as possible and be prepared to help their neighbours.

Heavy rainfall, that may lead to flash flooding, is currently occurring about the east tropical coast and ranges between about Port Douglas and Ayr, and should extend south to about Yeppoon during Sunday. Isolated 24 hour totals in excess of 300mm are likely.

Tropical Cyclone Ita should  move further southeast into the Coral Sea and away from the Queensland coast during Monday and Tuesday. Rainfall will decrease about the North Tropical Coast during Sunday and Monday as the system moves away. 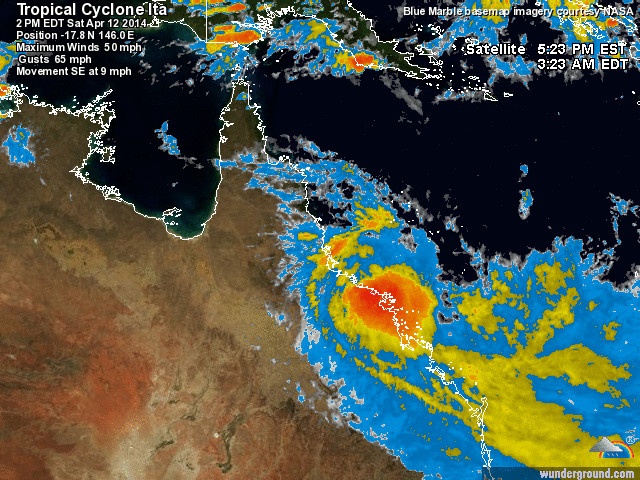