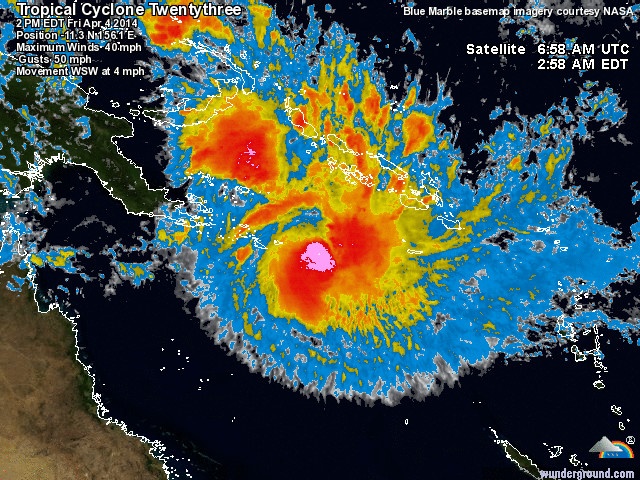 Flooding in the Solomon Islands has claimed lives of at least 21 people, left 40 missing and made up to 49,000 homeless.

A state of emergency has been declared after Honiara's main river, the Matanikau, burst its banks, Xinhua News Agency reported.

New Zealand has send an air force Hercules with disaster relief supplies in the area. 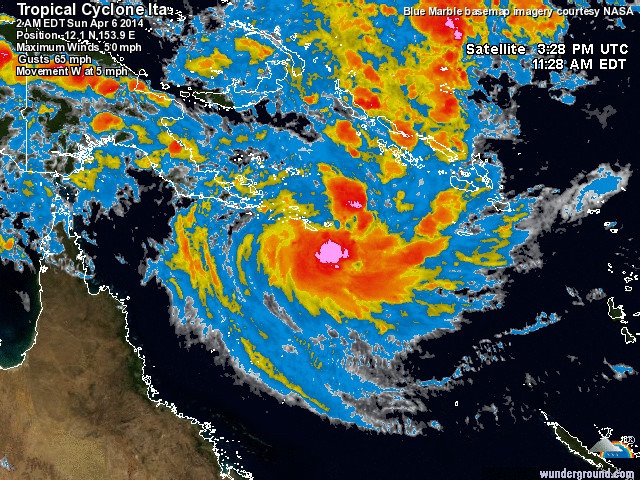 A Cyclone WATCH has been declared for coastal areas from Cape Grenville to Port
Douglas. 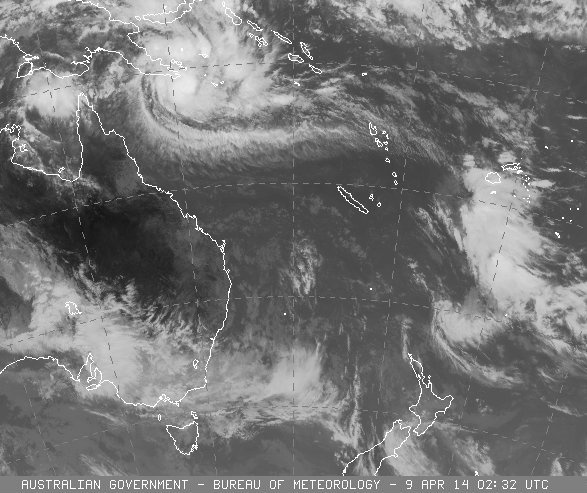 At 10:00 am EST Severe Tropical Cyclone Ita, Category 3, was estimated to be 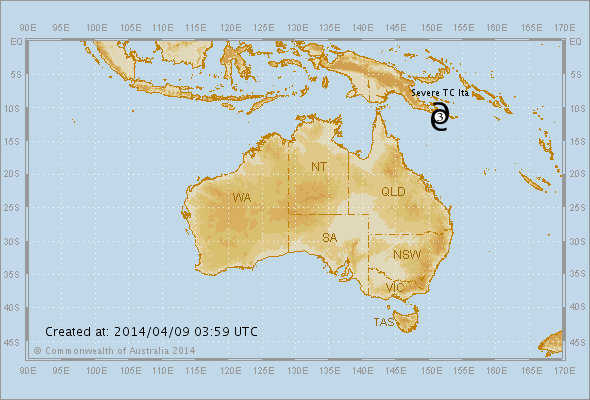 SEVERE TROPICAL CYCLONE ITA, CATEGORY 3, is expected to continue moving in a
general westwards direction towards the far north Queensland coast while
intensifying. GALES extend up to 240 kilometres out from the centre and may
develop between Cape Grenville and Port Douglas during Thursday.

Severe Tropical Cyclone Ita poses a significant threat to communities along the
far north Queensland coast and at this stage it is expected to approach the
coast between Lockhart River and Cape Flattery and make landfall late Friday as
a SEVERE CATEGORY 4 TROPICAL CYCLONE with VERY DESTRUCTIVE WINDS near the core
and GALES extending some distance from the landfall location.

The sea may rise steadily up to a level which will be significantly above the
normal tide between Cape Grenville and Port Douglas close to landfall on
Friday, with damaging waves, strong currents and flooding of low-lying areas
possible. People living in low lying areas that may be affected by this
flooding should take measures to protect their property as much as possible and
be prepared to follow instructions regarding evacuation of the area if advised
to do so by the authorities.

Very heavy rain, which may lead to flash flooding, is expected to develop about
the Peninsula and northern parts of the North Tropical Coast and Tablelands
districts on Thursday and persist into Friday.People between Cape Grenville and
Port Douglas should consider what action they will need to take if the cyclone
threat increases and listen to the next advice at 5pm EST. 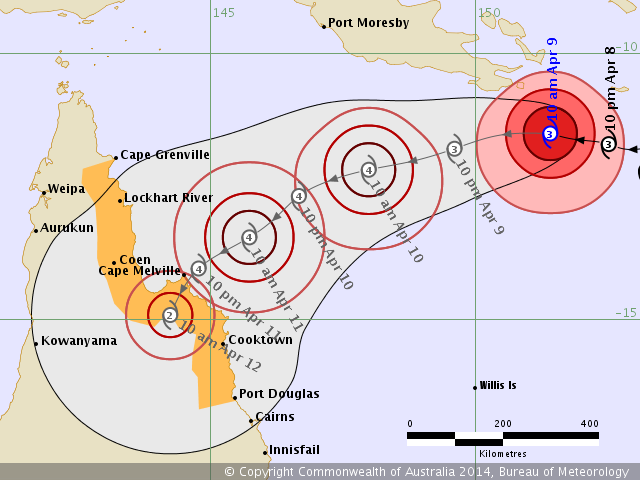 The next advice will be issued by 5:00 pm EST Wednesday 09 April.

This warning is also available through TV and Radio Broadcasts; the Bureau's
website at www.bom.gov.au or call 1300 659 212.  The Bureau and the State
Emergency Service would appreciate this warning being broadcast regularly. 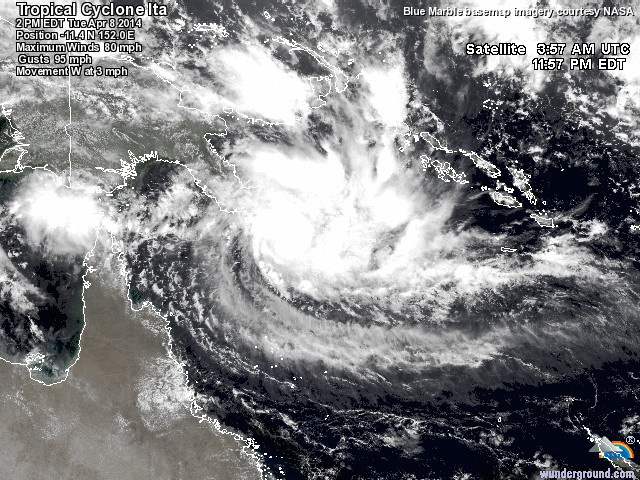 + 0 Tweet
WATCH THIS INCREDIBLE INTENSIFICATION...
TC Ita explodes from a Cat 3 to a Cat 5 in less than 12 hrs! 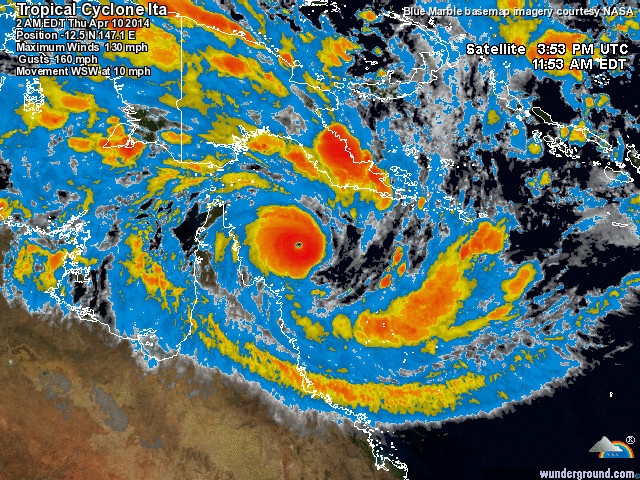 there can be only one
Debbieke
Lid
Woonplaats: knesselare. oost-vlaanderen belgië
Berichten: 8924
Lid sinds: 7 aug. 2008 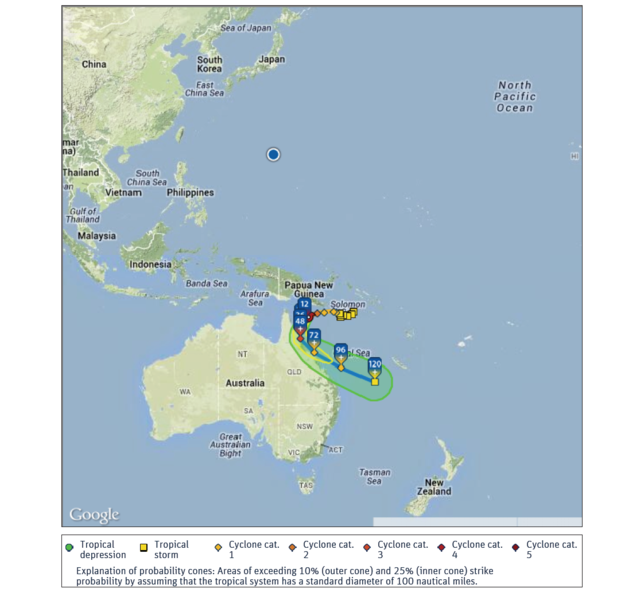 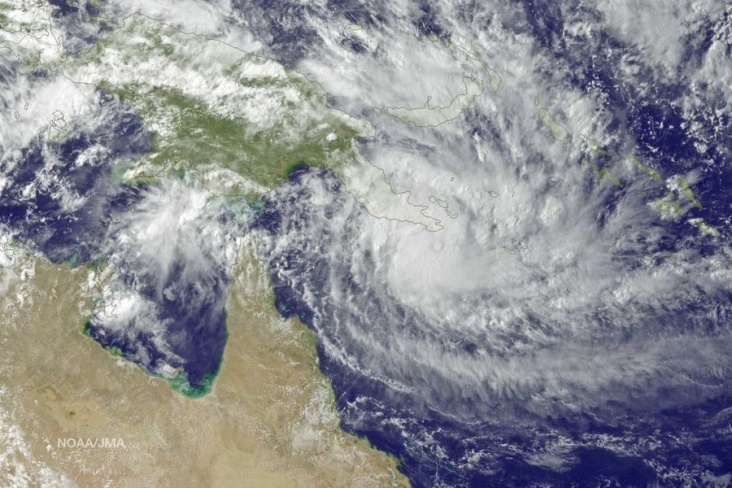 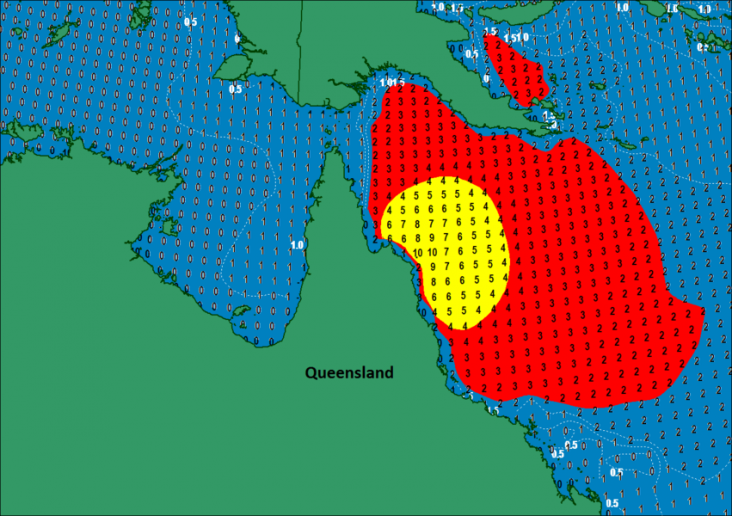 Severe Tropical Cyclone Ita, category 5, poses a significant threat to communities along the far north Queensland coast of Australia. At this stage it is expected to move to the southwest and make landfall between Cape Melville and Cape Tribulation later on Friday as a severe category 5 tropical cyclone with very destructive winds near the core and gales extending some distance from the landfall location.

Very heavy rain, which may lead to flash flooding, is expected to develop about parts of the Peninsula and North Tropical Coast and Tablelands districts on Friday and persist into the weekend. This image was taken by JMA/MTSAT at 0530Z on April 10, 2014. 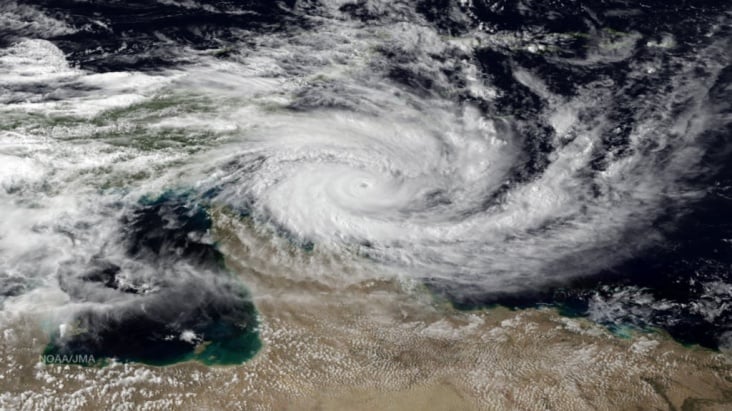 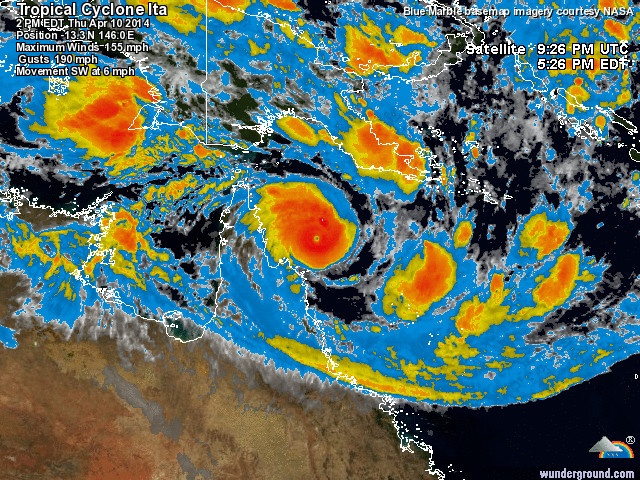 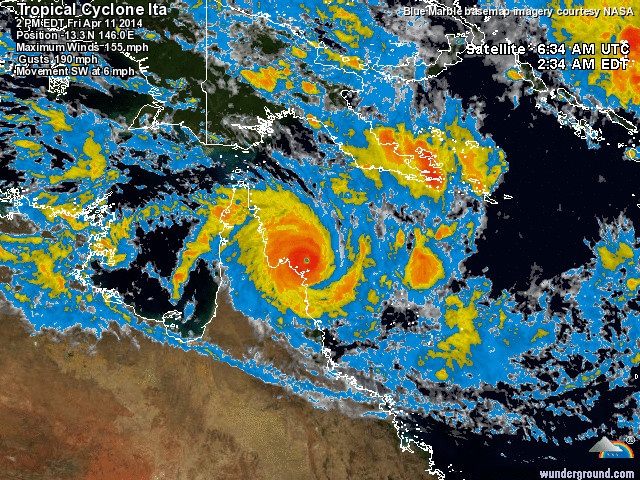 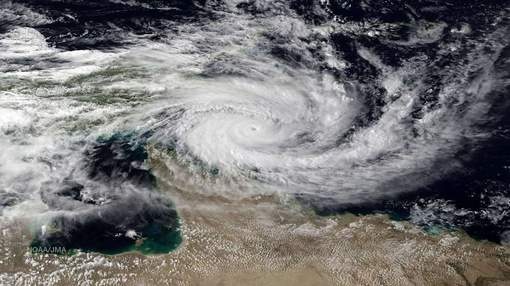 + 0 Tweet
Statestieken
NOTE: affects on land areas has just begun this system is far from over! 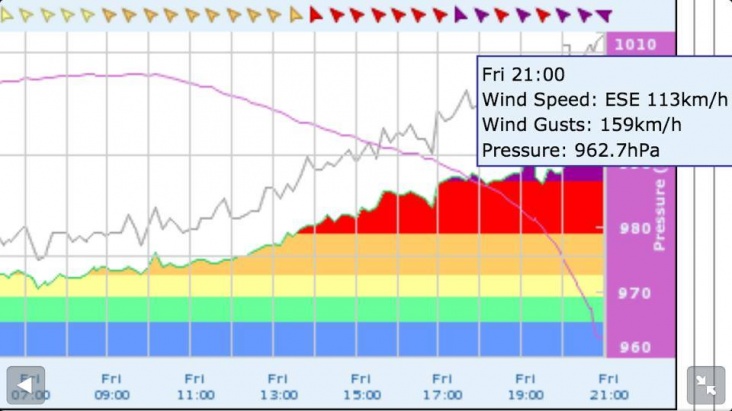 Residents of the northeast coast of Queensland, Australia are facing high winds, dangerous tides and very heavy rain between Cape Melville and Cooktown. These hazards will migrate southward for the next few days as the center of the storm remains close to the coast. This image was taken by the Suomi NPP satellite's VIIRS instrument around 0335Z on April11, 2014. 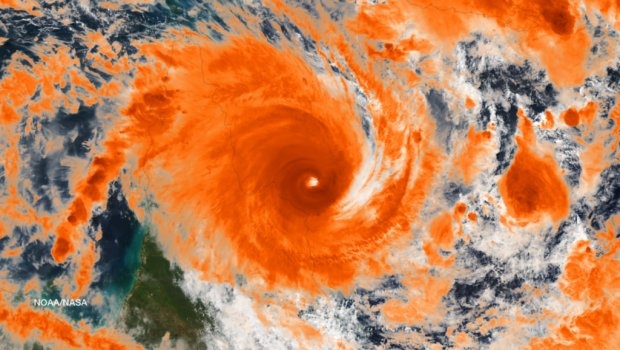 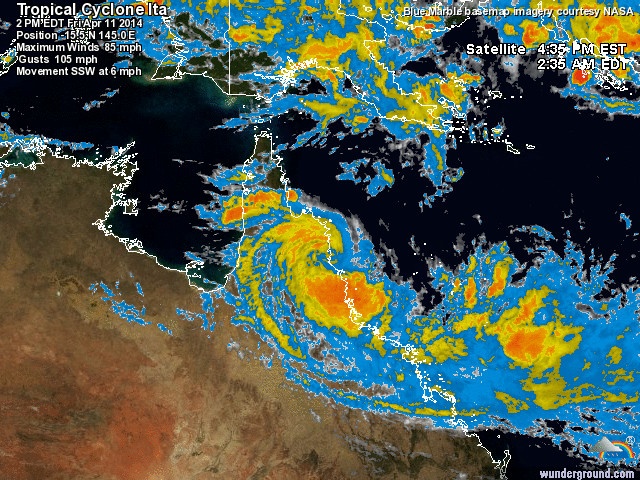