Storm Chaser Tim Samaras: One Year After His Death, His Gift Is Unmatched

+ 0 Tweet
Storm Chaser Tim Samaras: One Year After His Death, His Gift Is Unmatched
"We've lost the genius of Tim. I'm hoping that someone he inspired will step in. It hasn't happened yet."

It is once again that time of year, when men and (a few) women load up their camera equipment and fill up the gas tanks in their tricked-out vehicles and drive hundreds of miles toward the American plains, recommencing the chase of severe—meaning, to storm chasers, severely great—weather.

So far, the season has been a slow one, slower even than last year's—compelling a few restive storm chasers to venture into the dangerously hilly and forested Deep South region known as Dixie Alley, which experienced chasers tend to avoid due to its poor visibility.

Those who made the trip witnessed seasonal destruction. On April 27, 15 people were killed by a tornado sweeping across Faulkner County, Arkansas, which the Obama administration later designated a disaster area. The next day, a hulking wedge tornado plowed through Tupelo, Mississippi, damaging or leveling restaurants, schools, and churches. All told, the storms bedeviling Dixie Alley that week left 35 dead. 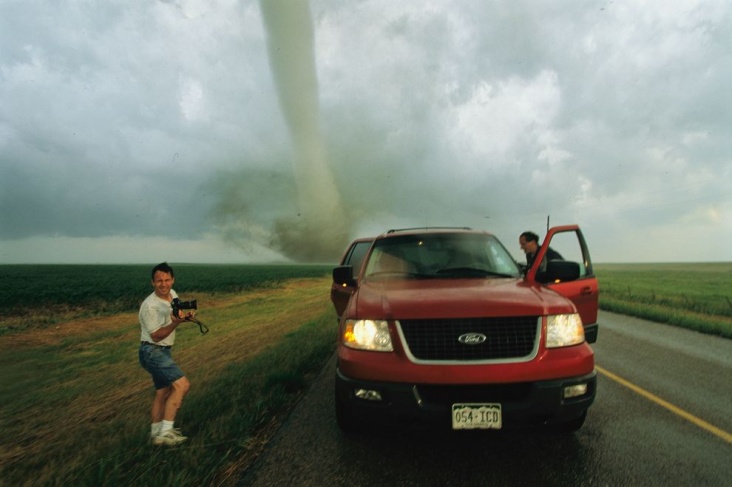 Among the luckiest of survivors was a group of amateur storm chasers who videotaped themselves driving directly into the storm's path near the town of Mayflower, Arkansas ("Oh, crap, we're in it," one of them moaned), and a West Virginian who drove all the way to Tupelo and also was nearly engulfed by a twister. The latter would recount to a newscaster, "I was really scared, because I remember the other three chasers who got killed." But, he added, "if I had to do it again, I would go. That's just the passion that I have for weather." 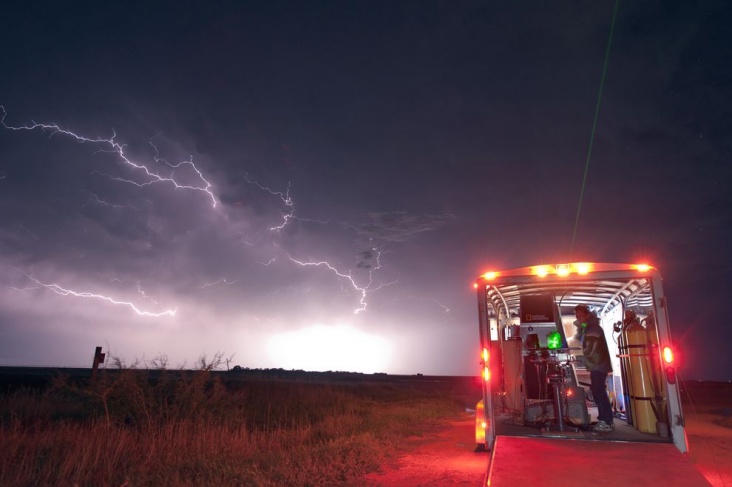 Unmatched Gift
"The other three chasers" were, of course, the TWISTEX storm-research team of Tim and Paul Samaras and Carl Young, killed by a devastating tornado in El Reno, Oklahoma, on May 31, 2013. It is likely that they would prefer a legacy other than the proliferation of reckless souls courting death for the sake of an adrenaline rush and awesome video footage.

Then again, they would certainly relate to the abiding "passion." Few, if any, storm chasers seem to have lost their passion in the wake of that tragic day, which I wrote about for a National Geographic magazine cover story last year ("The Last Chase," November 2013).

When I reached their former TWISTEX colleague Matt Grzych at his home in Greeley, Colorado, he was just about to head out for his first chase of the year. "There's a chance of supercells and weak tornadoes up in northeast Colorado," he told me. "After that big accident, it really shook me to the core. My wife's first reaction was, 'You need to stop—you need to retire from storm chasing.' But," he confessed, "it's in my blood." 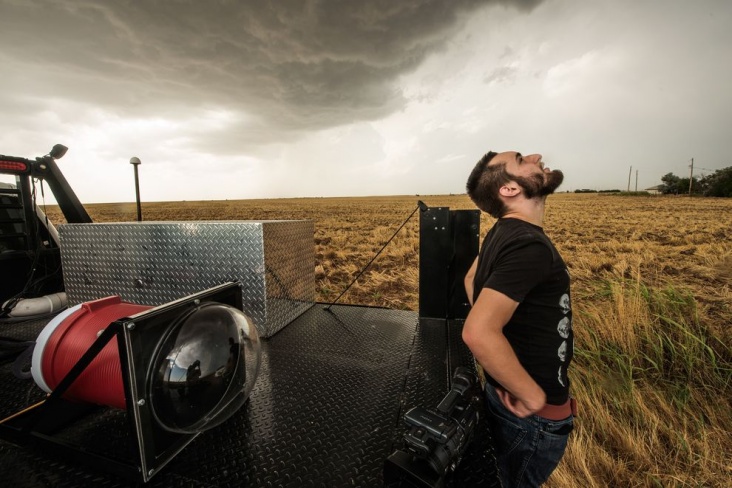 Paul Samaras, shown here in Kingfisher, Oklahoma, was a teenager when he joined his father, Tim, in the field.
PHOTOGRAPH BY CARSTEN PETER, NATIONAL GEOGRAPHIC CREATIVE

Honoring the legendary Tim Samaras and his partners by continuing the chase has been the easy part. Filling his shoes is another matter. The TWISTEX research has "ground to a halt," says cofounder Bruce Lee. "Tim held the project together, and he was the one who interacted with the nonacademic money folks."

Though the Texas Tech "Stick-Net" field researchers and the team headed by Joshua Wurman at the Colorado-based Center for Severe Weather Research continue to deploy devices intended to gather supercell measurements, no one has come close to matching the comprehensive data Samaras was able to get from inside the tornadoes themselves. Nor has an inventor of his stature emerged.

Samaras was working with the Tupelo-based Hyperion Technology Group to develop a new design of the famous data-gathering "turtle probes" that would be placed in the path of an oncoming tornado. That effort, Hyperion's president Geoff Carter told me, has also been tabled, since "Tim's gift was thinking outside the box, having a knack for knowing just what kind of design we needed—and that's a hole we haven't been able to fill."

As Denver-based meteorologist Mike Nelson says of his longtime friend, "We've lost the genius of Tim. I'm hoping that someone he inspired will step in. It hasn't happened yet."

The acuteness of the loss can be measured by the tributes bestowed on the late TWISTEX members. This past February, the annual storm-chaser convention, or ChaserCon, became a two-day send-up of the departed—all the more appropriately, since Tim Samaras had cofounded the event back in 1998.

Nelson punctuated his keynote address by placing a McDonald's cheeseburger on the edge of the podium, as Samaras routinely had done on the dashboard of his vehicle as a good-luck token. Another friend, Tim Marshall, brought with him over 400 foam cheeseburgers, which were distributed among the attendees. (Several of the props would thereafter be seen photographed on dashboards throughout the blogosphere.) A misty-eyed hush fell over the audience when Gabe Garfield of the National Oceanic and Atmospheric Administration presented a moving visual narrative of the TWISTEX team's final hours.

One of the most senior storm chasers, Chuck Doswell, elicited silence of a different sort during his harsh lecture to the attendees: "If we want to honor Tim and his teammates, if we want to have the loss mean anything, we have to think seriously about why we need to be in close to large, dangerous tornadoes—and we better have a damn good reason." 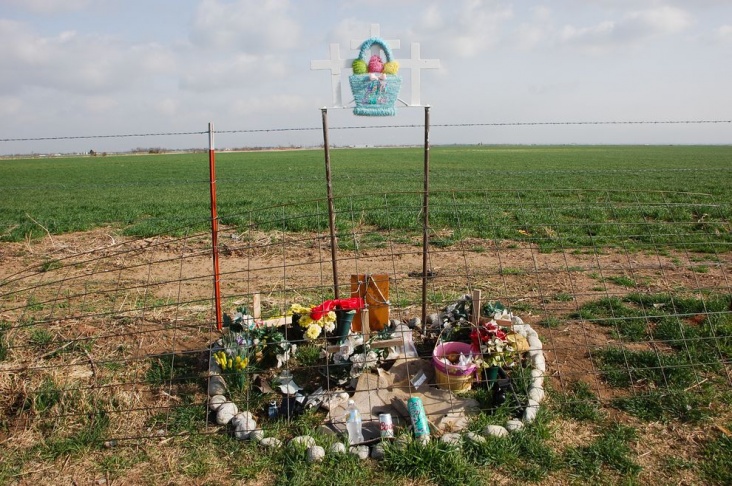 This memorial on Reuter Road honors the three storm chasers and TWISTEX.
PHOTOGRAPH BY ED GRUBB

The Mystery of the Last Moments
That Samaras felt he had such a reason, and that he was renowned for preaching caution, remain bitter ironies. Josh Wurman, Tim Marshall, and others recently published a peer-reviewed paper about the tragedy in the Bulletin of the American Meteorological Society. Its conclusion is that the TWISTEX team's car was hit by an intense subvortex possessing a wheel-within-a-wheel "trochoidal motion" that would have been impossible for Samaras to discern.

"The only remaining mystery," says the NOAA's Garfield, "is what those last moments were like—were they trying to put their car in reverse, did the storm blow them off the road, how long they survived it. Those are unknowable." Carl Young's video camera had apparently reached a data limit and clicked off a minute before the tornado hit them. Paul Samaras's cameras were eventually recovered in a nearby creek, but the Samaras family has not given any indication that there was anything recovered from them. The team's "turtle probes" were filled with water and contained no useful data.

The spot a few yards off Reuter Road where the body of Tim Samaras was found inside the crushed vehicle (his son and Carl Young were thrown from the car) may soon become a permanent memorial site for the storm chasers. The law enforcement official who discovered the wreckage shortly after learning that his own home had been destroyed, Canadian County Deputy Sheriff Doug Gerten, initiated the project on May 6; within three hours, its fund-raising goal of $3,500 had been surpassed. 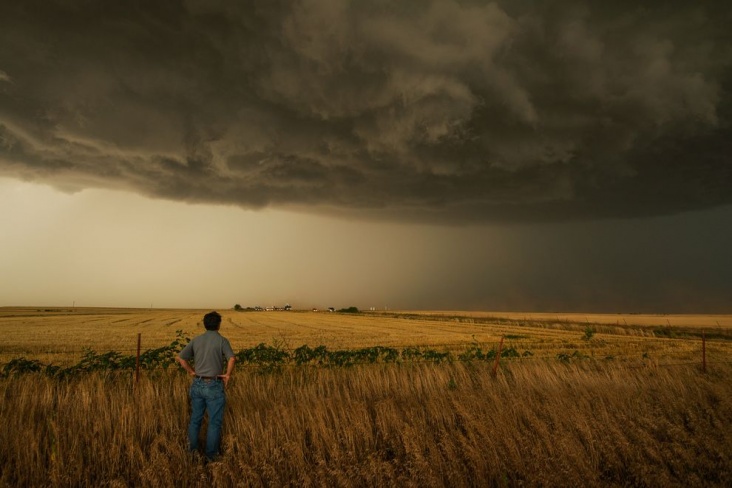 Pilgrimages
Well before then, pilgrimages to the quiet agrarian locale had become frequent. Recently, former TWISTEX team member Ed Grubb paid a visit. It was morning, and the sun broke through the clouds just as Grubb slowed at his destination. Other than the chiming of meadowlarks and the distant growling of a tractor, the air was as peaceful as it had been violence-crazed on May 31.

Since that day, white river rocks have been moved to form a perimeter around the area. Three crosses on the ground commemorated Grubbs's friends. Strewn about were floral arrangements, an Easter basket, nametags from ChaserCon attendees, and the shirt of another former TWISTEX colleague, Tony Laubach.

Beside the three crosses, Grubb set the beverages he had brought with him, the ones he knew his friends had favored at the end of their chases: soda water for Carl Young, ginger tea for Paul Samaras, Coors Lite for Tim Samaras. Grubb said a few words to his pals, as he was recently given to doing on his now-solo chases: "OK, guys, where should I go now?" Then the storm chaser departed the plains—knowing, however, that he would be back.

"My heart wasn't in it last year," he told me, referring to the weeks after his colleagues' deaths. "This year, I'm feeling kind of refreshed. A new beginning."

By Robert Draper
for National Geographic
PUBLISHED MAY 27, 2014

Bron: NGC | Gewijzigd: 28 mei 2014, 13:22 uur, door Ries
Freedom is not worth having if it does not include the freedom to make mistakes.
Terug naar boven
Bericht toevoegen
1 Gebruiker leest nu dit topic, onderverdeeld in 1 gast en 0 leden