+ 0 Tweet
Estofex
A level 1 was issued for Italy, parts of Slovenia and Croatia mainly for excessive precipitation, large hail and to the lesser degree for severe wind gusts.

Only Prattica di Mare 00 UTC sounding managed to capture the plume of steeper lapse rates that should slowly drift southeastwards during the day. Looking at the surface obs, Td values of 15 to 20 deg are observed over the region as of 06 UTC. Some further moisture advection from the sea will be possible with the development of the surface low e.g. over N Italy. GFS and ECMWF simulate locally moderate to high CAPE values, especially concerning the coastal areas and Po valley. Vertical wind shear is forecast to be rather weak, increasing towards the north and the Wednesday night. Nevertheless, with local enhancement of the wind field due to the surface cyclogenesis, up to 15 m/s of DLS may be available over NW Italy during the evening hours. Current thinking is that with widespread initiation, multicells will likely form, with stronger cells posing threats of large hail or local downbursts. With quick storm clustering, excessive rainfall risk will become elevated. It seems that the highest risk of heavy rainfall may be tied to the development of MCS during the night hours over the eastern coastline of North Adriatic, where cell training may be observed. 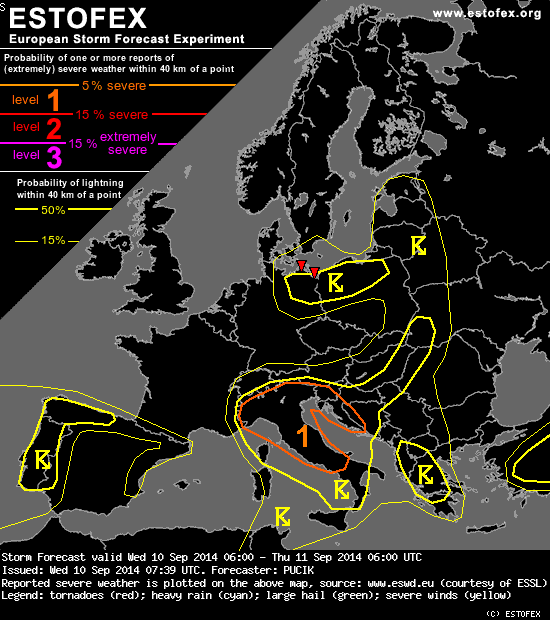 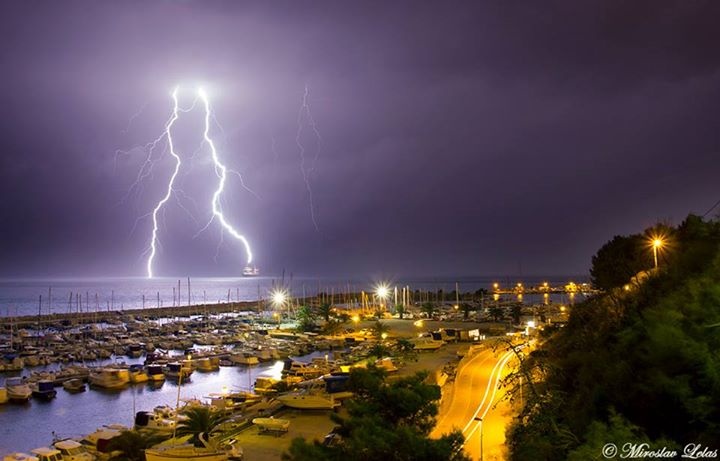 Satellite loops show thunderstorm developing in bands across the area. Surface observations reveal pronounced convergence zone with low T-Td spreads and dew point values between 19 and 21 °C. Corfu's stations report Temperatures around 25°C and dramatic drop in pressure. These conditions, combined with the fact that mean tropospheric flow (around 15 m/s) is parallel to the convergence zone, point to a very high threat of cell training and subsequent excessive rainfall events in NW Greece and Albania the next 4 hours.

Moreover, with LLS above 10 m/s and low LCLs (~900m), if storms can develop rotation, perhaps aided if they move over the convergence zone with enhanced vorticity, tornadoes can not be ruled out. 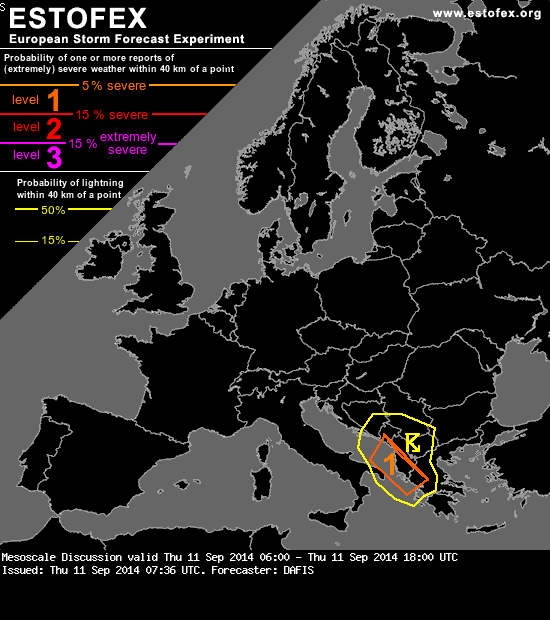 In Vodice, Croatia where 174 mm of rain fell in the last 12h. Many coastal areas of Croatia are experiencing similar flooding at this moment!

An outbreak of severe weather across CNTRL Mediterranean is in effect and expected to continue through afternoon / evening hours.

Dangerous weather scenario across southern Europe today with a robust upper low sitting the Alps and N Mediterranean and surface cyclone over Italy and Adriatic sea. Another powerful upper low is maintaining west of Iberia.

A HIGH risk is in effect for the S-CNTRL parts of the eastern Adriatic coast in Croatia, Bosnia and Herzegovina, Montenegro and NW Albania for excessive torrential rainfall and flash flooding. Rainfalls in excess of 80-100 mm are expected along the entire lenght of the area, with some locations possibly receiving over 200 mm in 24h. This is a particularly dangerous situation, major property damage and loss of life possible! Additionally, favourable S-SE surface winds enhance SREH, so some waterspouts are expected to develop along the C-CNTRL Adriatic sea and Ionian sea.

A MDT risk is in effect for parts of Slovenia, Croatia, Bosnia and Herzegovina, Montenegro, Serbia, Kosovo, Macedonia, Greece, Hungary, Slovakia, Poland and Czech republic for excessive rainfall and flooding threat given the fact that these areas have already received high amount of rainfall during the last days.

A SLGT risk is in effect for the area surrounding the HIGH/MDT risk for excessive rainfall.

A SLGT risk is in effect for NE Turkey, Georgia and extreme SW Russia for large hail, heavy rainfall and severe wind gusts. 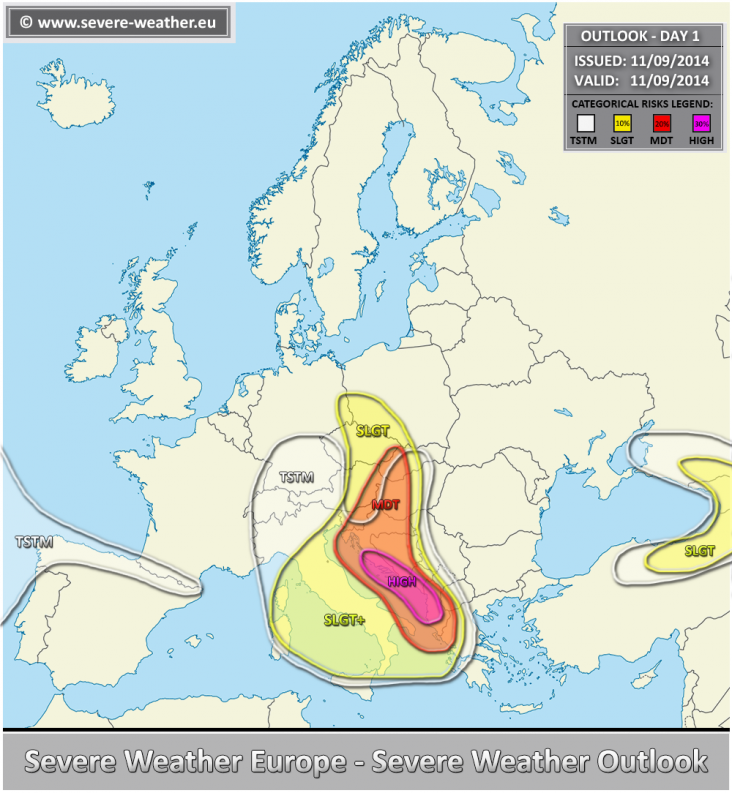 A level 1 was issued for the N-Adriatic Sea and surroundings mainly for excessive rain and an isolated large hail and tornado event.

In the range of the cold-core low, persistent isentropic lift / WAA bring unsettled and rainy conditions to a large part of CNTRL Europe. W-Croatia/Slovenia will see highest rainfall amounts as thunderstorms move ashore during the day. Orographically enhanced rainfall and embedded thunderstorms could push rainfall sums to 100 mm/24h at a few places. A weak cyclogenesis within the lower troposphere and the depression's placement over CNTRL Italy limit the risk of organized/training convection in those areas and we kept a level 1 for this event. Stronger storms along the coasts could bring isolated large hail due to 500-800 J/kg MLCAPE and 15-20 m/s DLS. An isolated spout-type event along the coasts is also possible.

The level 1 was expanded to N-Italy, where augmented LLCAPE and low LCLs indicate an chance for a few spout-type tornado events. A slight warm-up at 850 hPa should lower the risk from W to E over N-Italy beyond 15 Z.

A disturbance ejects out of the base of that cold-core low during the overnight hours and travels rapidly to the N. EZ and GFS both show a swath of enhanced QPF from E-Croatia to E-Austria as stratiform rain with embedded thunderstorms occurs. Anticipated rainfall amounts remain below the level 1 threshold. + 0 Tweet
atest WRF model guidance for this afternoon and tonight simulating another round of excessive rainfall across parts of Adriatic sea into NW Balkans. Locally, rain sums in excess of 100mm/12-24 hours are increasingly likely. 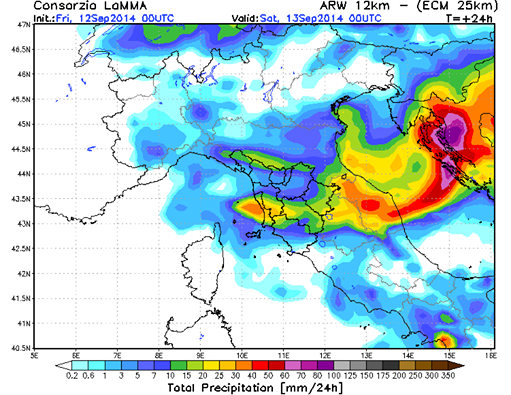 A long fetch of northeasterly winds over the Baltic Sea creates a belt of augmented low-level moisture with surface dewpoints around 16°C per latest observations (Fri 21 UTC) and precipitable water above 30 mm. In vicinity of the upper-level low, limited CAPE is expected to build and "lake effect" showers and low-topped thunderstorms become likely on Saturday. They may align into bands parallel to the background flow, which can result in localized high rainfall accumulations when they move onshore in southern Sweden, on the Danish islands or in northeastern Germany.
On the eastern flank of the upper-level low, a confined area of increased 0-3 km wind shear around 15 m/s and veering wind profiles may overlap with this unstable area. More discrete convection might therefore even develop rotating updrafts with the possibility of an isolated tornado or two.
Activity will move more deeply into Germany overnight while it slowly decays.

A few hundred J/kg of CAPE are forecast to build in response to daytime heating. Due to a history of warm air advection, convective initiation will likely happen rather late. Scattered thunderstorms can form in the late afternoon and merge into several clusters in the evening. Despite uncertain details and litle agreement of the forecast models, a level 1 seems to be warranted around the Polish-German border, where precipitable water above 30 mm, slow storm motions and the expected high coverage indicate a risk of localized flash floods. Weak vertical wind shear and limited instability should preclude other severe weather.

A second, stronger surge of warm air advection overspreads these regions from the south. Friday's 12 UTC soundings (Budapest, Szeged, Belgrade) confirmed that CAPE around 500 J/kg can easily build after some hours of insolation, and scattered thunderstorms are expected to form from noon onwards on Saturday. Deep-layer shear is enhanced to values around 20 m/s as a small jet streak curls around the upper-level low from central Italy into Hungary. Storms may therefore organize into multicells or a few supercells, and marginally severe hail and wind events are not ruled out as long as they stay discrete. However, with large-scale lift in place, low cloud bases and weak capping, storms will likely merge into clusters soon and flash floods become the main risk in the evening and overnight (precipitable water between 30 and 40 mm and possible training storms).
Strong ascent in the left exit of the jet streak may keep some of these storms going while they move into western Slovakia, Moravia and Lower Austria especially in the second half of the forecast period. They will become elevated and embedded into stratiform clouds and can therefore not benefit from the vertical wind profiles any more, which would be excellent near the nose of the warm air advection. However, heavy rainfall with a risk of localized flooding may still be an issue.

Scattered storms will also still go on near the base of the upper-level low over Slovenia, Croatia and over the Adriatic Sea. In its wake, drier and cooler air spreads southward and suppresses thunderstorm activity over Italy and the Central Mediterranean region.