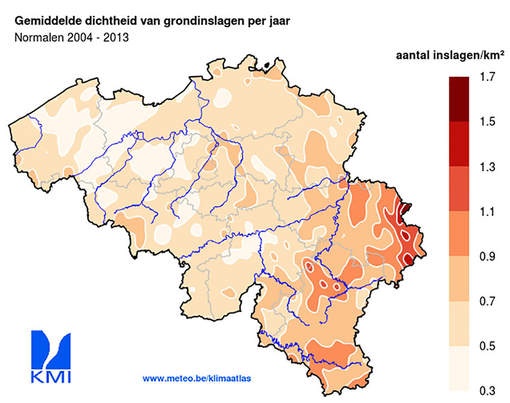 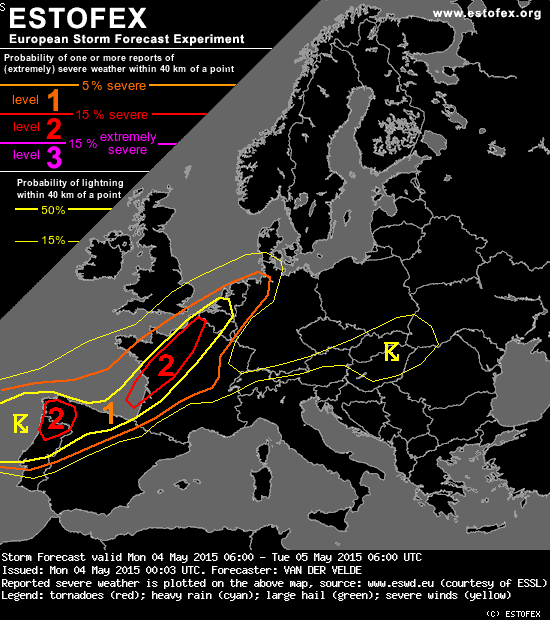 An active depression near Portugal is advecting significantly warmer, unstable air with a SSW-ly flow into southwestern Europe. It follows in the wake of an old low with its core west of Ireland which briefly brought a surge of warm air into western and central Europe. A remnant occlusion is decaying between Czech Republic and Ukraine.
The Portuguese low is a highly baroclinic system with a marked warm front about 100 km north of the line Galicia - Switzerland during the afternoon. Strong flow veering with height is present across the warm sector and a Spanish Plume situation develops, this time separately from the Saharan Air Layer which runs over the western Mediterranean basin.
Around 12Z the cold front enters the Iberian Peninsula and reaches SW France around 21Z along with the center of the low passing west of Brittany. By Tuesday 06Z the warm front is predicted to have reached northern Netherlands and central UK.

The northern portion of the cold front over this region around 15Z is backed by a PV lobe which causes strong upward motion. The cold front passes earlier at mid levels which creates a zone with a negative vertical theta-e gradient (potential instability) which combines with a few hundred J/kg MLCAPE. A line of discrete cells or a continuous linear convective system are thought to form. Since the flow at 1-3 km AGL averages 30 m/s, very severe wind gusts can be produced by these storms. On the other hand, very low LCLs reduce cold pool strength. This may rather benefit the tornado threat from supercells, which is significant due to nearly 20 m/s 0-1 km shear, 20 m/s 1-8 km shear and SREH over 250 m²/s² over 0-3 km. Over northern Spain, cloud bases are higher while low level winds and shear are reduced. SREH and deep layer shear do allow supercell storms with a larger chance of large hail and lower tornado/gust chance.

Initially the warm front over central France with its associated convergence line is the main focus for storm initiation. MLCAPE in the range of 500-1000 J/kg is locally possible and agreed upon by various models. Northward across the warm front, mid level lapse rates and low level theta-e drop, so storms are not likely to develop upscale here. 0-6 km shear of 25 m/s and over 200 m²/s² SREH suggest supercell mode with large hail as main threat, as low-level shear is lacking over central France (<10 m/s 0-1 km) during the afternoon. The exception is the Atlantic coast north of Bordeaux, where LCL should be low, mid level vorticity advection generates additonal lift and 0-1 km shear is over 17 m/s. A tornadic thunderstorm is quite possible under such circumstances. As southern flow increases, the warm front shall drift northward in the evening, and MCS formation is likely.

The main show appears reserved for the evening and night when the Spanish Plume lapse rates and the PV lobe trigger elevated convection with over 1000 J/kg MUCAPE over Bay of Biscay. Although extreme low-level shear and SREH will be in place across France, the severity of the storms depend on effective shear in the unstable elevated layer. This seems not a problem with GFS overlapping >500 J/kg MUCAPE with >20 m/s shear. With dry air inflow in the lee of the western Pyrenees, large hail parameter is peaking at 18-21Z along the SW France coast. If all goes well and storms formed, these will race northwards developing into an MCS with enhanced severe gusts threat. Such systems may hold themselves together on their course toward Belgium and Netherlands in the early morning due to strong dynamic support, although a not very broad and weakish CAPE region with dry air over central France might as well mean an earlier end to most nocturnal storms. 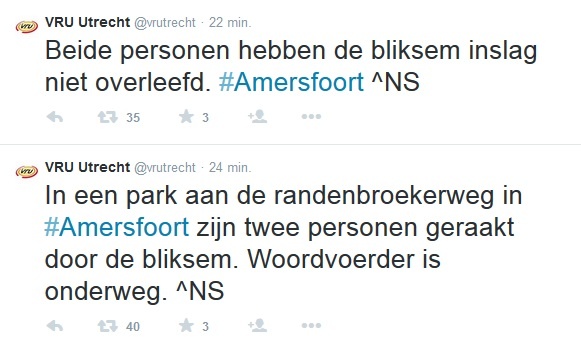