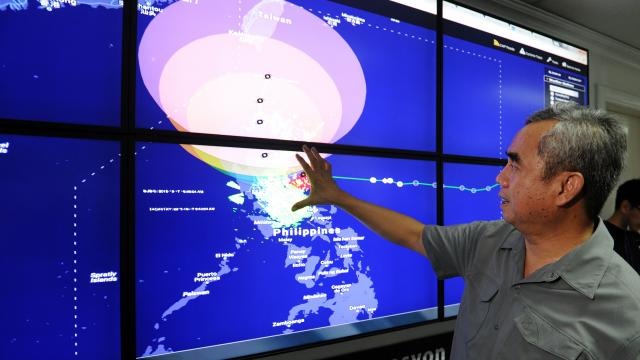 Extremely heavy rainfall from the once Super Typhoon Koppu has caused deadly flooding and mudslides in the Philippines. The Global Precipitation Measurement or GPM core satellite estimates rainfall totals from space and that data was used to create rainfall maps at NASA. By October 21, Koppu had weakened to a depression and continued slowly moving away from the northern Philippines.

​Koppu hit the eastern coast of Luzon as a category four super typhoon with winds of 130 knots (150 mph). Koppu weakened but was still battering the Philippines as a typhoon after reaching the Lingayen Gulf on Luzon's western coast. Typhoon Koppu then made a turn toward the north and continued to drench the northern Philippines as it followed Luzon's northwestern coast. Torrents of rain flowing from mountainous terrain magnified the effects of very high rainfall totals.
At NASA's Goddard Space Flight Center in Greenbelt, Maryland, a rainfall analysis was performed using NASA's Integrated Multi-satellitE Retrievals for GPM (IMERG) data. Those data showed that most of the island of Luzon was covered by very heavy rainfall from typhoon Koppu. This analysis indicates that most of the island of Luzon received over 300 mm (11.8 inches). Some areas near the typhoons path were shown to be saturated with over 760 mm (about 30 inches) of rainfall.

As a tropical storm Koppu moved into the Luzon Strait and continued weakening while moving away from the Philippines.

At October 21 at 0300 UTC (Oct. 20 at 11 p.m. EDT) the Joint Typhoon Warning Center issued its final bulletin on Koppu. By that time, Koppu had weakened to a tropical depression with maximum sustained winds near 25 knots. It was located near 19.1 degrees north latitude and 122.3 degrees east longitude, about 362 nautical miles south of Taipei, Taiwan. It was moving to the east at 7 knots.

Koppu has moved into an area of increasing vertical wind shear which is expected to dissipate the storm by October 22.

The GPM satellite is managed by both NASA and the Japan Aerospace Exploration Agency.