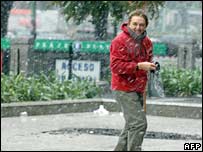 Temperatures plunged to -22C (-8F) in parts of Argentina's province of Rio Negro, while snow fell on Buenos Aires for several hours on Monday.

Two deaths from exposure were reported in Argentina and one in Chile.

In Bolivia, heavy snowfall blocked the nation's main motorway and forced the closure of several airports.

In Argentina, several provinces in the Andes have been placed under a storm alert, according to the national weather centre.

But thousands of people cheered in the streets of Buenos Aires at the sight of the capital's first snowfall since 1918.

"Despite all my years, this is the first time I've ever seen snow in Buenos Aires," 82-year-old Juana Benitez was quoted as saying by the Associated Press news agency.

In Chile, temperatures dropped to -18C (0F) in parts of Araucania region in the south.

Meteorologists predict that the cold snap will last for several more days.

Bitterly cold weather in May caused some 20 deaths and forced the Argentine authorities to ration supplies as the country's energy system came under strain.

Monday's snowstorm struck on a national holiday in Argentina. The authorities are watching the demands on the power grid as the country gets back to work on Tuesday.

However, ministers have already appealed to consumers to save energy where they can.

Correspondents say although Argentina's economy has been growing strongly in recent years, there has not been sufficient investment in infrastructure.

Argentine meteorologists are predicting more cold and even freezing weather over the next few days.

A couple take pictures of a surprise snowfall in the Argentine capital of Buenos Aires, July 9, 2007