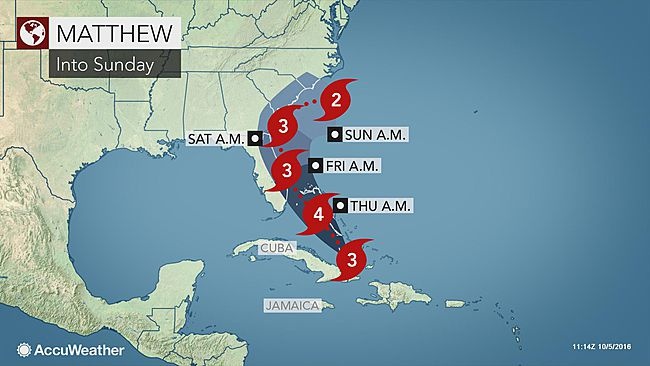 #HurricaneMatthew: Latest from the @Space_Station of a monster of a storm!

Powerful Hurricane Matthew is scouring the islands of the Caribbean with 145 mph winds.  Orbiting high above the tempest in the darkness of space, the NOAA/NASA Suomi NPP satellite has observed the storm's ripple effect on the upper atmosphere: These ripples are called "gravity waves"--essentially, waves of pressure and temperature excited by the upward motion of air from the storm below. Gravity does not vary inside these waves; instead, they get their name from the fact that gravity acts as a vertical restoring force that tries to restore equilibrium to up-and-down moving air. Similar patterns have been observed above powerful thunderstorms.

Matthew's gravity waves are visible from the ground as well.  Frankie Lucena of Cabo Rojo, Puerto Rico, captured them in his recent snapshots of sprites above the hurricane: "Steven Miller of Colorado State University was kind enough to prepare these images for me to confirm that my sprite photo did contain gravity waves," says Lucena. "My location in southwestern Puerto Rico is noted in the satellite image above. By pointing my camera at the lightning, I also caught the waves."

Left to themselves, gravity waves would be invisible to the human eye. We see them, however, because they impress their patterns upon a luminous phenomenon called "airglow." 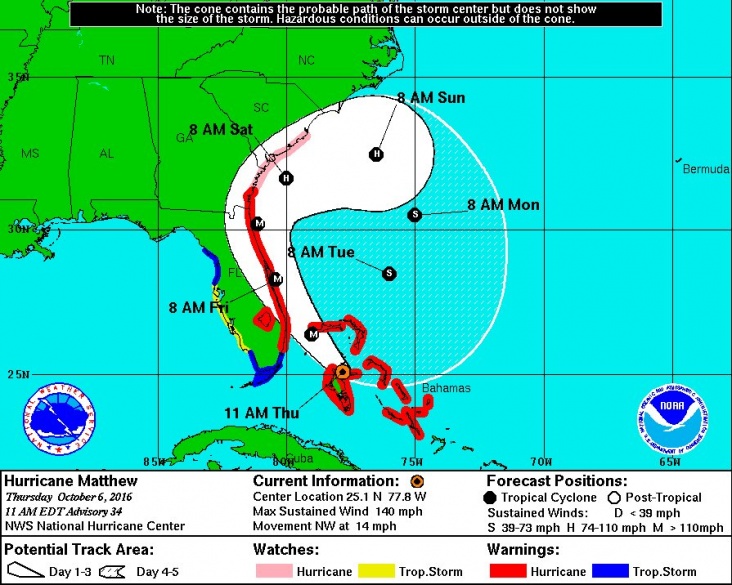 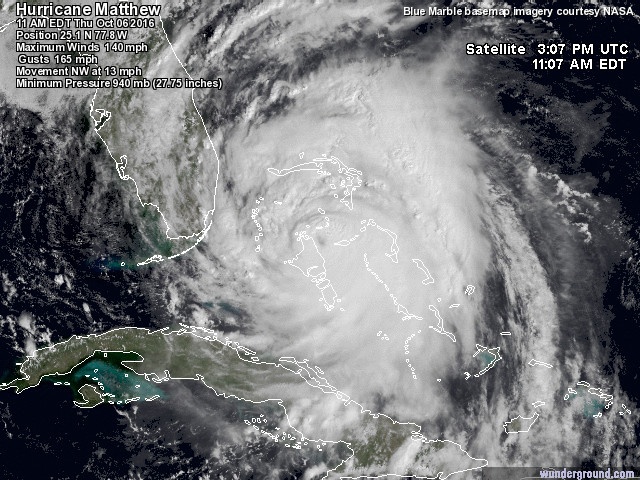 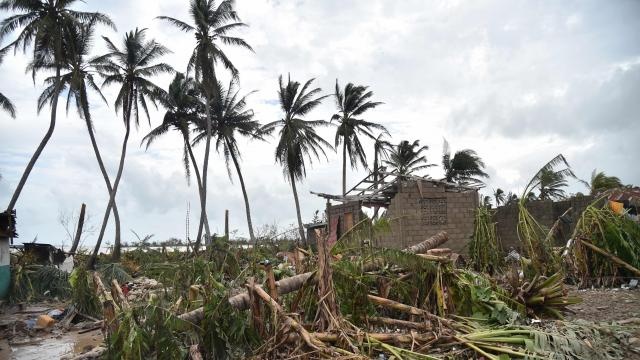 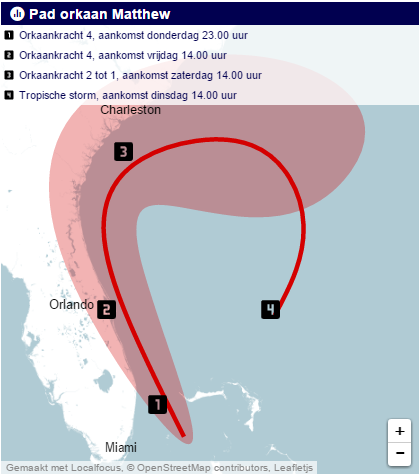 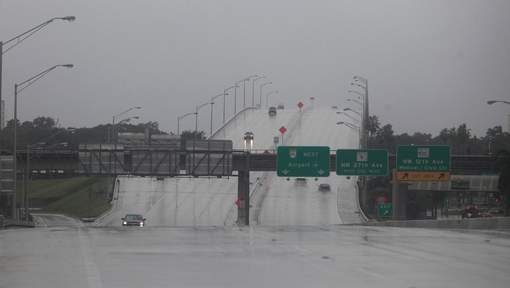 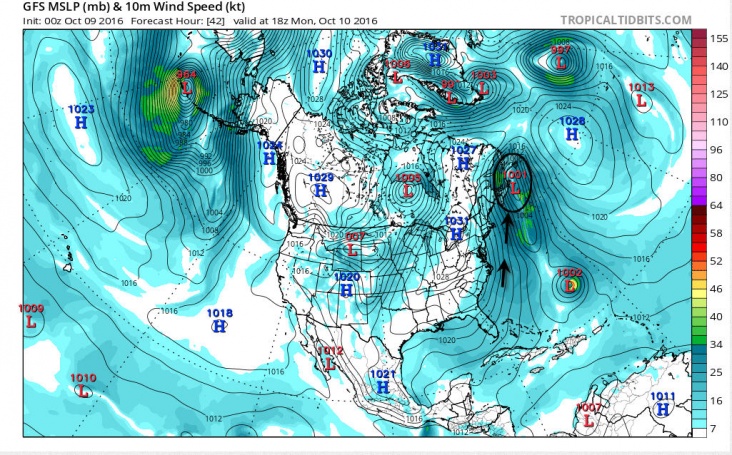 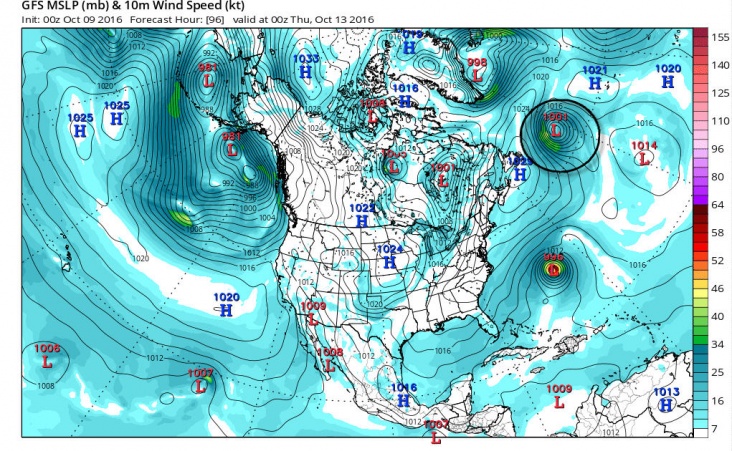 Record-breaking flooding has occurred in North Carolina after Hurricane Matthew dumped extreme amounts of rain on eastern parts of the state.

Though the rain ended on Sunday, and it should remain dry for many days ahead, rivers will still be rising in some locations or at least remain high. That could lead to additional record flooding at some gauges.

In some cases, the flooding rivals that of Hurricane Floyd's in 1999.

This flooding is the result of 6 to 18 inches of rain that fell in eastern North Carolina from Matthew. The top total was18.38 inches near Elizabethtown, followed by 15.65 inches at William O Huske Lock 3 and 14.82 inches in Fayetteville.

Lumber River @ Lumberton West 5th Street: Crushed previous record crest by roughly three-and-a-half feet, as of Monday.
Lumber River @ Lumberton: Exceeded record crest by nearly four feet on Sunday. This topped the previous record from the remnants of Hurricane Frances in 2004. The river is forecast to remain in record-flood stage much of this week.
Lower Little River @ Manchester: Topped old record set Sept. 19, 1945, by more than two-and-a-half feet.
Neuse River @ Smithfield: Exceeded record crest by over a foot-and-a-half on Monday.

More records are possible at these locations this week:

Making our way to Lumberton on 211 as water is trying to get to mainstream rivers pic.twitter.com/XzDrVYOLII

Also notable is that the Tar River in Greenville, North Carolina, could reach its second highest crest on record, and its highest crest since Hurricane Floyd (29.7 feet) by the middle part of this week.

The forecast calls for the river to reach just under 25 feet by Wednesday.

According to the National Weather Service, here are some possible impacts when water reaches the following levels on the Tar River in Greenville.

The flooding caused by Matthew will still be a major concern for many days ahead. Please take action if you are in an area that is being affected and follow what local authorities instruct you to do.

The US Air Force Explosive Team was called onto a beach in South Carolina over the weekend to deal with a rather unexpected result of the hurricane-force winds that have been tearing across the US Southeast coast and the Caribbean.

On Sunday morning, a local reported the discovery of 16 Civil War cannonballs on a Folly Island beach near Charleston, that had been unearthed by Hurricane Matthew. The bomb squad proceeded to detonate them with a small amount of explosives right there on the site.

Most of the 150-year-old ordnance was destroyed on the beach, but some were able to be transported safely back to the local navy base for disposal.

"We call it 'rendering safe', and we did that right there on the beach front," Eric Watson, a spokesman with the Charleston County Sheriff's Office told the press. "They’re putting the dirt from the detonation back in the hole and they’re transporting the device to (Joint Base Charleston)."

Of course, nothing’s ever simple when it comes to handing weird, ancient explosives, and in this case, the team had to wait for more than 6 hours for the tide to give them space for the detonation.

"We had to wait until after 7[pm] for the tide to go down," Watson told Mary Bowerman at USA Today. "When the tide receded, our guys and members of the US Air Force explosive team used a small amount of C-4 to detonate the cannonballs."

The site is just 20 km (12.8 miles) from Fort Sumter in Charleston, where the first shots of the Civil War were recorded at the First Battle of Fort Sumter on 12 April 1861.

As Linda Wheeler reports for The Washington Post, the 18-square-km (7-square-mile) Folly Island had been used as a Union fort at the time, and also staging area for attacks on Confederate strongholds.

So it’s no surprise that a number of Civil War discoveries have been unearthed on the island, including an unsettling find in 1987, when construction workers unearthed the remains of 14 soldiers from the 55th Massachusetts regiment of the US Coloured Troops - most of which were missing their heads.

"What was odd about the bodies discovered on the island was that 12 of them didn’t have skulls and were also missing other body parts," says Wheeler.

"And, more importantly, they showed no signs of battle injury, according to an account in an official history of Folly Island. What happened to these men was then and still is a mystery."

Just in case you were looking for more US icons that ended up in strange places during the hurricane, witness the most photogenic bald eagle in the world, that had wedged itself in a car near Green Cove Springs, Florida during the storm:

Clay County Sheriff’s Office says bald eagle is okay after getting stuck in the grille of an oncoming car pic.twitter.com/BMVY33n0mr 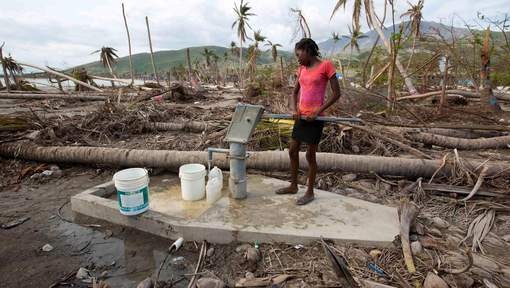