Fastnet Lighthouse gusting back up to 185kmh with eye of #Ophelia obvious on rainfall radar. pic.twitter.com/gMha1GmA2q Images from our Roches Point weather webcam.
Trees are coming down.
Roches Point has a mean wind speed of 111km/h
Gusts of 156km/h#Ophelia pic.twitter.com/NEsTvuob6M

Where does the word hurricane come from? #words #Ophelia https://t.co/lXpFQ99tZe pic.twitter.com/jd2hZRCFE5

#Ophelia is giving Cork City FC's Turners Cross a right battering. Stand has collapsed by the looks of things! pic.twitter.com/d3MmEpCjQn

#EA are on the ground in #Cumbria & #Lancs ensuring defences are in working order & monitoring sea levels: https://t.co/DdGUB8FXxE #Ophelia pic.twitter.com/8AaWD7DPZ9

Joke's over. It's quite serious now #ophelia pic.twitter.com/jOnWmFpuBH 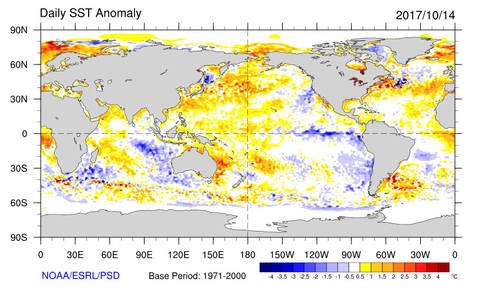 The roof off Douglas Community Centre in Cork is gone. #Ophelia pic.twitter.com/EtZ5IFMJqZ 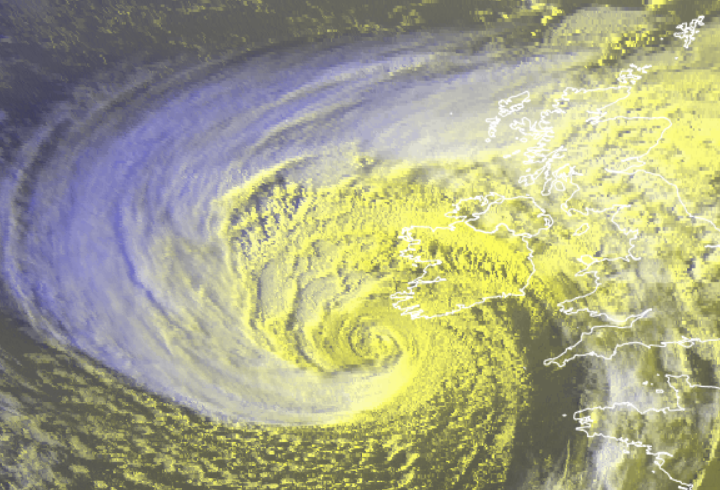 All schools across Ireland are closed for a second day, as the clean-up after Hurricane Ophelia begins.'Thousands of homes and businesses are still without power, after severe winds caused disruption and damage. Flights and ferries were cancelled, and many roads are still closed due to fallen trees. 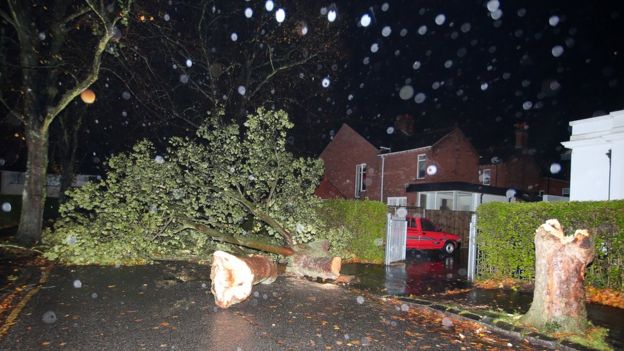 People are advised to make only essential journeys on Tuesday until all roads can be cleared of debris., NI's Department of Infrastructure said it had received about 400 road-related incident calls. "All motorways are open and advisory speed limits have been removed. At present of 200 roads impacted, around 40 roads remain closed," a spokesman added.

In Londonderry, the Foyle Bridge has reopened to all vehicles but a 30mph speed limit is in place. The city's Peace Bridge is closed. Translink said a normal service is planned, subject to safety assessments, but it would be subject to delays and alterations due to poor weather conditions. Passengers are advised to check service disruption before travelling and to leave extra time for journeys.

School services are not running while schools remain closed.
The decision to shut schools in the north for a second day will no doubt raise a few eyebrows among parents, especially as the Met Office told education officials that the worst of the weather would be over by Tuesday morning. A spokeswoman for the Department of Education said: "Other considerations included potential power outages in schools, risks to travel arrangements including school buses and timelines for inspection of safety at schools as a result of the severe weather conditions." 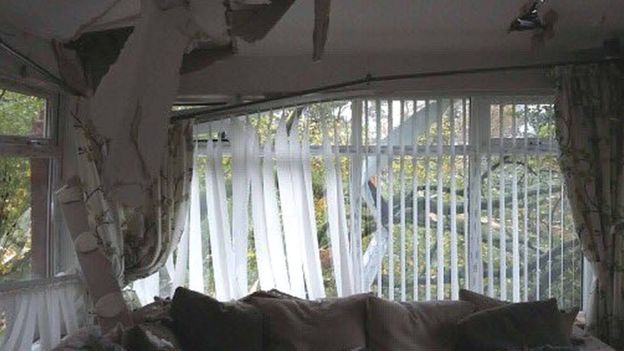 High alert
Principals, parents and pupils were at least given more warning second time around - some headteachers had criticised how late they were instructed to close their schools ahead of Ophelia's arrival on Monday. All further education colleges will remain closed on Tuesday, but Queen's University and Ulster University will reopen.

Schools have also closed for a second day in the Irish Republic. The island of Ireland was on high alert on Monday - people were advised to stay indoors and not to make unnecessary journeys. Many businesses shut early to ensure staff made it home before the worst of the storm hit, turning many city centres into ghost towns. 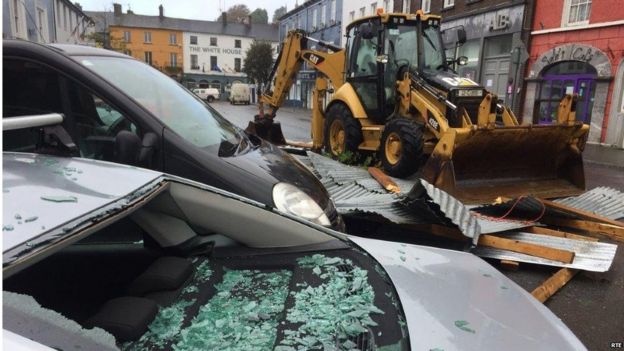 The remnants of Hurricane Ophelia made for one of the most intense storm systems to hit the Republic of Ireland, where a national emergency was declared. The south-west coast is thought to have suffered the brunt of the damage, with Cork one of the worst-hit areas.

A man was killed in Dundalk, County Louth, when his car was struck by a fallen tree. In Cahir, County Tipperary, a man in his 30s was killed in a chainsaw accident when he was trying to clear a tree downed by the wind. A woman in her mid 50s also died when a tree fell on her car outside Aglish village in County Waterford. A female passenger, in her 70s, was injured and taken to hospital for treatment. Her injuries are not believed to be life-threatening.

Irish Lifeboats had to rescue three men on a yacht after they got into trouble in the storm. The men had been trying to get to safety in a harbour but were constantly pushed back by wind and tides.

Check out a selection of #Ophelia's windspeeds recorded by @MetEireann pic.twitter.com/dD2ZBCSSrR