The earthquake was rather shallow with a depth of 8 miles (12.1 km) and was centered 26 miles (42 km) to the south-southwest of Acari, Peru, according to the United States Geological Survey (USGS). The USGS initially reported the temblor's magnitude at 7.3 but later revised it to 7.1.

The Pacific Tsunami Warning Center has issued a tsunami alert for the coast of Peru, warning that hazardous tsunami waves are possible within 186 miles (300 km) of the epicenter.

The 7.1 magnitude quake hit at 0918 GMT at a depth of around 10 km (6 miles), the USGS said. Peru’s government Geophysical Institute said the earthquake was of magnitude 6.7 with its epicenter in Lomas, in the southern region of Arequipa.

Peruvian maritime authorities said the quake did not produce a tsunami on the Peruvian coast. Arequipa Governor Yamila Osorio said on Twitter that 20 “light injuries” were reported in the town of Cacha, while there was minor material damage including some collapsed roads. Several municipalities were without electricity, and many adobe houses had collapsed, Osorio said. There were no reports of any deaths so far.

A strong #earthquake struck off Peru's coast, prompting a tsunami alert for parts of the country that was eventually cancelled pic.twitter.com/DkRGpjXCur 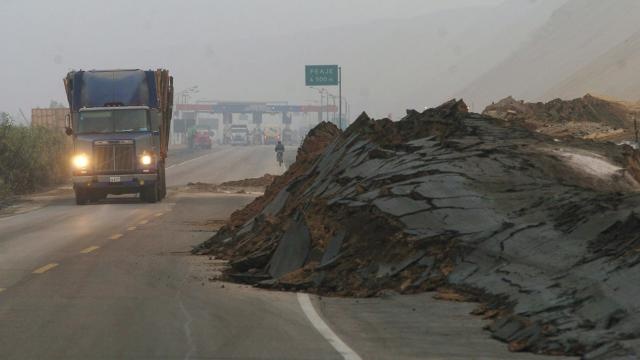