A cutoff low in the central Mediterranean pushed huge amounts of Saharan dust from Libya toward the eastern Mediterranean on March 22, 2018, heavily impacting the region, especially the island of Crete.

A thick layer of Saharan sand reached Crete around 16:00 local time, dropping the visibility at Heraklion airport to 600 m (2 000 feet). In some parts of the island, like Chania, it mixed with the smoke from local wildfires, making the air unbreathable.

The thickness becomes really apparent once we remove the coastline layer. A rare sight indeed:

A new irruption from Libya to Greece is expected for next Sunday, March 25 but it's probably going to be less severe than the present one, the Barcelona Dust Forecast Center said.
Bron: https://watchers.news
Joyce.s
Moderator
Woonplaats: Helmond
Berichten: 3066
Lid sinds: 13 jan. 2015
23 maart 2018, 11:43 uur | Bericht #486159

The wind brought some #africandust to #crete.
Weather today reminds me #altcoins. pic.twitter.com/BdEzwHMINJ

There is no filter on this photo.
This was taken today in #Crete, #Greece, a sand storm seems to occur every year, southern winds bring dust/sand from the Sahara to create this orange haze. Along with hot winds, its one of the craziest things you'll ever see. pic.twitter.com/7zm9vEVWVc

More Saharan dust for the central and eastern Mediterranean over the next three days - Greece in for another choking day. Some Saharan dust also quite a way further north! Details: https://t.co/ZbkdIx2D15 pic.twitter.com/vBZpWApL8V 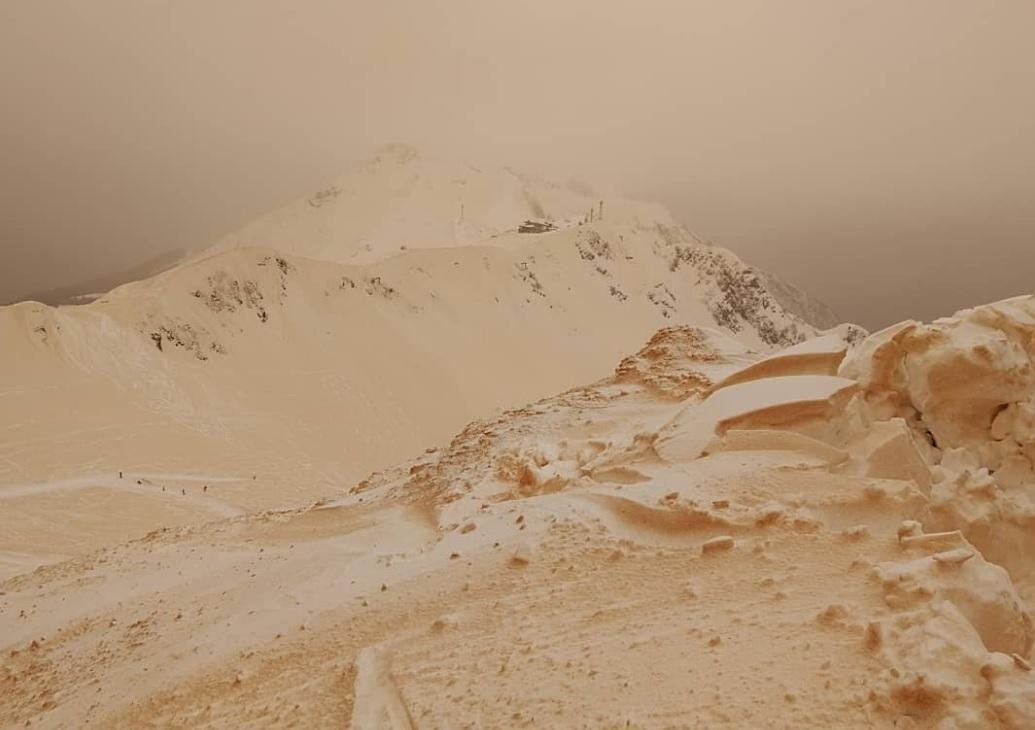 People in eastern Europe have been wondering at the appearance of orange-tinted snow. Pictures of the snow have been posted on social media from Russia, Bulgaria, Ukraine, Romania and Moldova.

Meteorologists say the phenomenon is caused by sand from Sahara desert storms mixing with snow and rain. It occurs roughly once every five years but concentrations of sand are higher than usual his time. People have complained of sand in their mouths.