A level 2 was issued for parts of Eastern France, parts of Benelux and Western parts of Germany for mainly for large hail, severe wind gusts, and tornados.

A level 1 was issued for the area surrounding the aforementioned LVL1 mainly for the same accompaniments.

A level 1 was issued for parts of Ukraine and Belarus mainly for excessive precipitation.

A level 1 was issued for parts of Turkey for large hails and severe wind gust.

A level 1 was issued for the Caucasus (Georgia, Russia) for large hail and severe wind gust.

A strongly amplified longwave trough is situated over Western Europa. Its main trough axis is traveling throughout the forecast period from Spain towards France. It initially has a meridional orientation and become zonal orientated while traveling northeastward. It will then get the character of a short wave trough while the main trough itself is rebuilt by downstream developments.

This transition process of the trough and the traveling of the initial main trough axis will be the process of interest for Western to Central Europe. It will lead to the development of a surface low that will under reinforcement travel from France toward the North Sea during the forecast period. This then will lead to an enhanced baroclinity with a strengthening horizontal temperature gradient.

Further downstream a strengthening ridge with a zonal orientated axis will lead to stable conditions.

Another area of interest can again be found over parts of Southeastern Europe. Although not that strong as the days before, an independent upper level low is situated with its center just north of the Balkan peninsula. This upper level low will bring unstable conditions in a broad area.

...Parts of Eastern France, parts of Benelux and Western parts of Germany...

An airmass boundary separates cool air over western parts of France from warm to hot airmasses over Eastern France, Benelux, and German. Along the boundary, longer lasting rain is forecasted. Further downstream, in the warm sector, Lapse Rates are forecasted to steepen due to diurnal heating.
Enhanced LL moisture over parts of the area of interest is present and thus will give CAPE values of about 1500 J/kg, locally even more than 2000 J/kg.
However, in parts of the area, one can find drier air masses in the lower troposphere that are mainly due to lee effects on the northern flank of the mountains (strong southerly flow). This insertion of dry air makes the forecast with respect to local effects more complicated.

While during the day, the lack of a clear forcing suppresses convective activity, this will change in the afternoon to evening hours, when the trough axis comes into play. This axis will strengthen the surface low as well as the horizontal temperature gradient. Strong synoptic scale lift is forecasted with the advancing trough axis. This is also supported by the fact that the area of interest is situated under the right entrance region of the upper-level jet.

DLS is forecasted to be around 15 to 25 m/s in the evening hours. During the first half of the night, the strongest shear values are shifting eastward, leaving the area where most of the convection is expected to develop. The same is true for SRH0-3km. However, models partly still show values of 100 to 300 m2/s2 overlapping with developing convection. Looking into prognostic soundings, nicely curved hodographs can be found. LLS is forecasted around 10 to 12 m/s whereas directional shear is more pronounced than speed shear.

Our current thinking is that convection starts to organize in the late afternoon/early evening hours and will then further organize into a larger mesoscale convective system that is traveling northward during the night.
At the beginning large to very large hail can be expected due to the good CAPE-Shear environment. Later on, the severe wind threat will be the main issue, especially when line segments can form on the forward flank of the system. From 850 hPa upward, a pronounced wind maximum is forecasted that is orientated perpendicular to the axis of organization of the convection. This in combination with the better organization into a mesoscale convective system enhances significantly the risk for severe wind, which may also become widespread.
Having in mind the nicely curved hodographs and enhanced SRH values in combination with lowering LCLs tornados are possible.

The main uncertainty at the moment is how good strong shear values and dynamics can overlap with the developing convection. This strongly depends on the exact time of development of first. The earlier this happens, the better the overlap will be. As a consequence a broad level 1 area was drawn. Embedded is a rather small LVL 2 area that points to the region where we think the overlap of all ingredients is best. The SWODY-1 tomorrow evening will probably give a clearer insight and an adaption of the level areas.

Another round of convection is expected during the day. The upper level low in combination with diurnal heating will lead to a steepening of the lapse rates. In addition, high LL moisture with specific humidity values of 11 to 13 g/kg is present. As a result 500 to locally 1500 J/kg of CAPE are forecasted.

We expect the convective activity to start rather early during the day. The storms will quickly become widespread. With the lack of DLS, storms are not expected to become better organized but will have a pulsating character.

The LVL1 area was drawn in the region where good low to mid-level convergence (<850hPa) can be found and where highest ppw-values are present. Having only weak 500 hPa winds the main risk of those storms is excessive precipitation. However at the beginning of the activity or when different storms interact with each other locally large hail or the accumulation of large amounts of hails is possible (mainly due to high CAPE values).

Convective activity is assumed to rather quickly decrease during the first half of the night due to the lack of synoptical scale forcing.

...Parts of Ukraine and Belarus...

Very high values of specific humidity (up to 15 g/kg) are the main reason for CAPE of more than 2000 J/kg that is predicted to build up during the day. The source of the high LL moisture is the Black Sea. PPW-values are as high as 40 mm. In addition, upper-level flow is only weak to moderate (around 15 kn in 500 hPa). Propagation vectors show only slow moving and back-building storms. As a result, excessive precipitation is expected to occur with those storms.
DLS is only weak. However, LAMs show locally enhanced values. Thus, a locally better organization bringing severe wind gusts and large hail, cannot be excluded.

With the help of moist air masses from the Black Sea and steep lapse rates from further inland, CAPE values of more than 2000 J/kg can build up during the day.

DLS values are locally enhanced with values of up to 15 m/s. Thus large to locally very large hail, as well as severe wind gusts are possible. Excessive precipitation cannot be ruled out but is of minor importance.

A similar situation as in Turkey but with better shear conditions (locally up to 20 m/s of DLS). Storms may cluster rather quickly which then limits the risk of severe wind gusts and large hail.
NitroGenetics
Lid
Woonplaats: Scheerwolde
Berichten: 262
Lid sinds: 5 jun. 2011
4 juni 2019, 09:19 uur | Bericht #490760 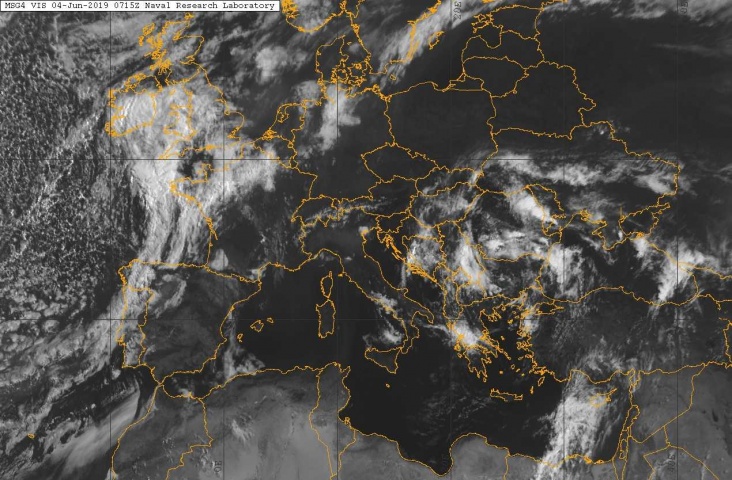 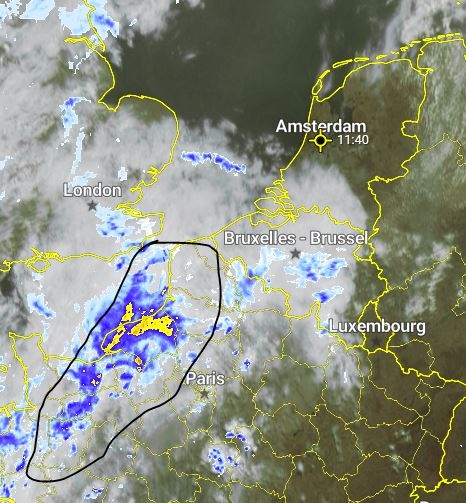 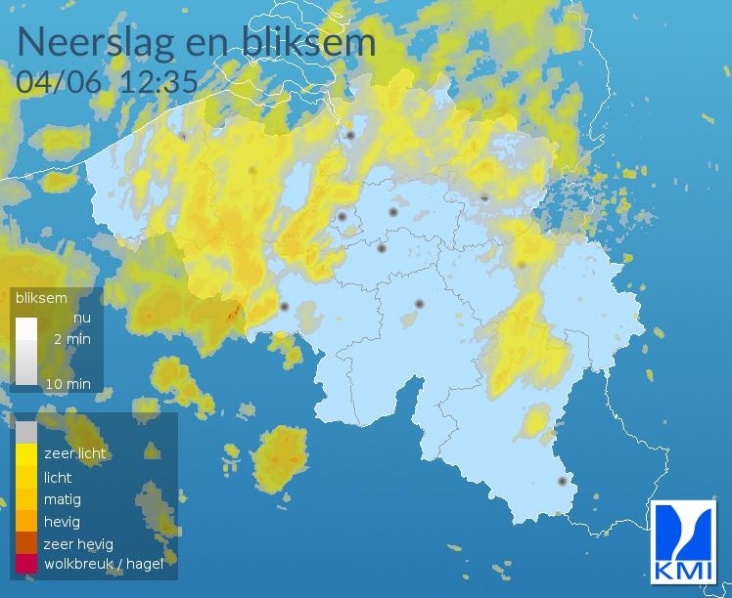 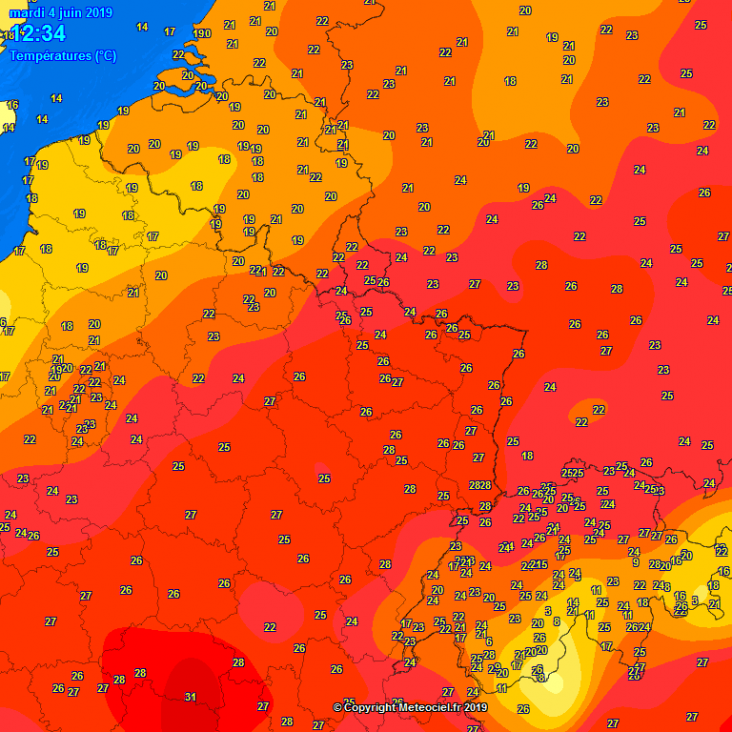 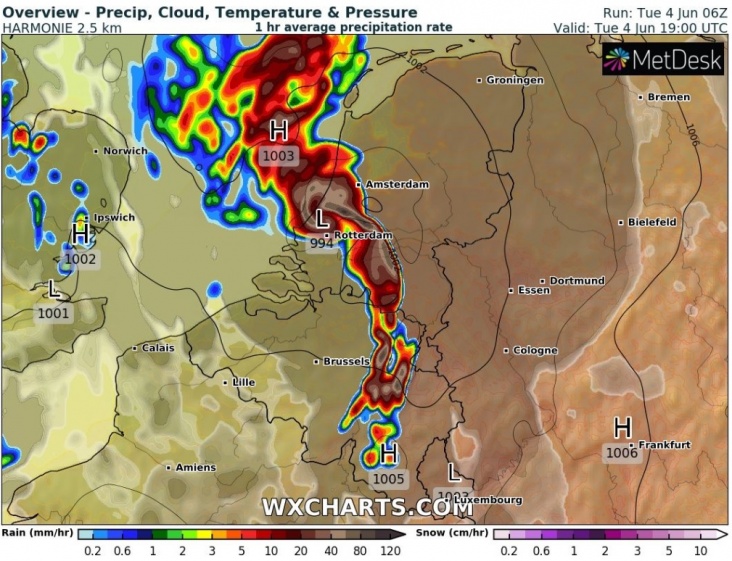 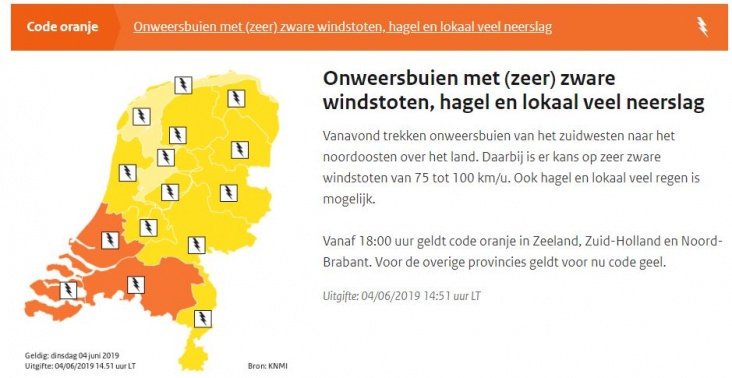 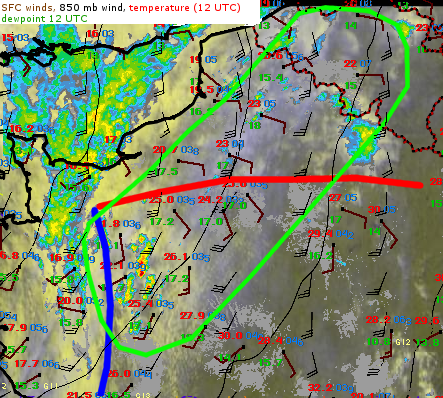 At 13 UTC, scattered towering cumulus across the northern Pays de la Loire, Normandy and Hauts-de-France regions were developing below a cirrus deck. Within this region, low-level humidity has gradually risen and 17-18Â°C dew point temperatures are observed at 13 UTC. Storm initiation seems imminent in this region. Given the strong deep-layer shear, they may develop quickly into supercells or bowing structures.

Across the northern half of the MD regions, winds are easterly north of a diffuse warm front, and strong low-level directional shear is occurring and increasing. Any storm that develops in this regime has a marked potential to develop strong low-level rotation and become tornadic. That said, convective initiation seems more hesitant here. The region should be monitored close for storm development.
Bas de Leeuw
Lid
Woonplaats: Wijchen
Berichten: 231
Lid sinds: 30 nov. 2011
4 juni 2019, 17:05 uur | Bericht #490782 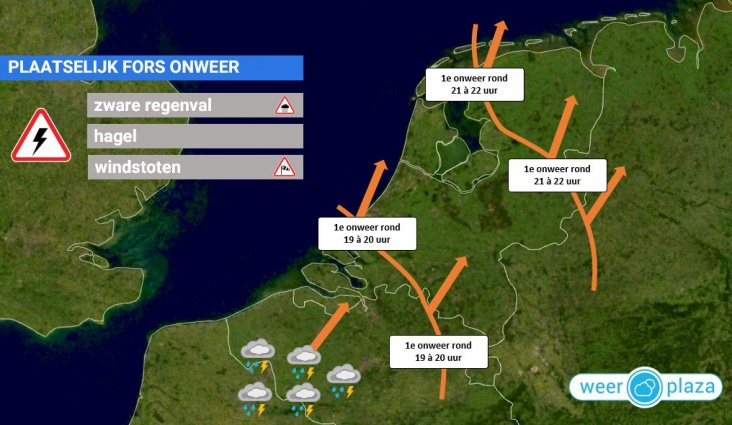 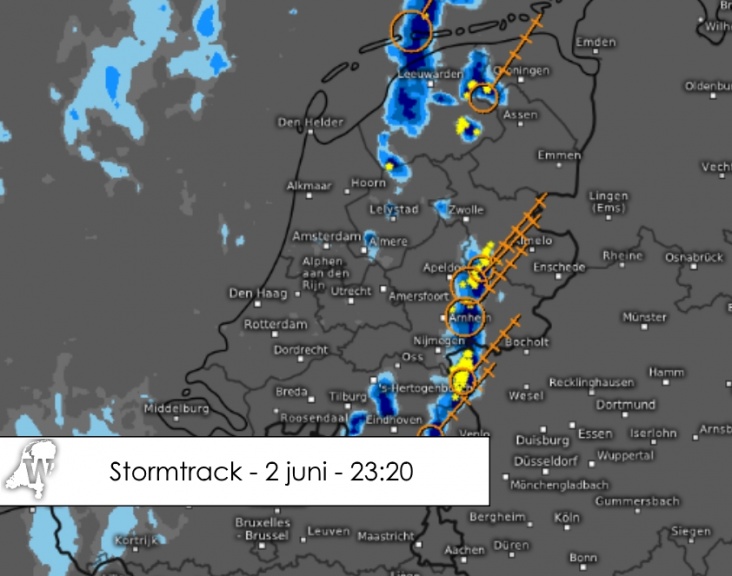 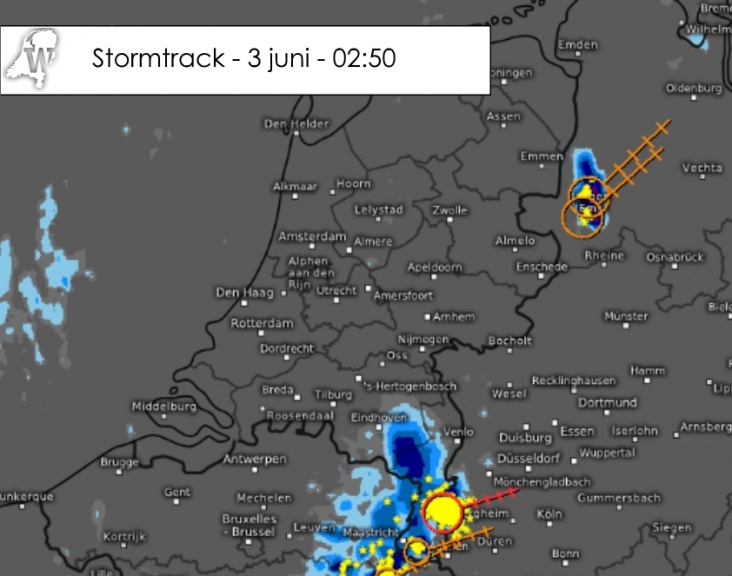 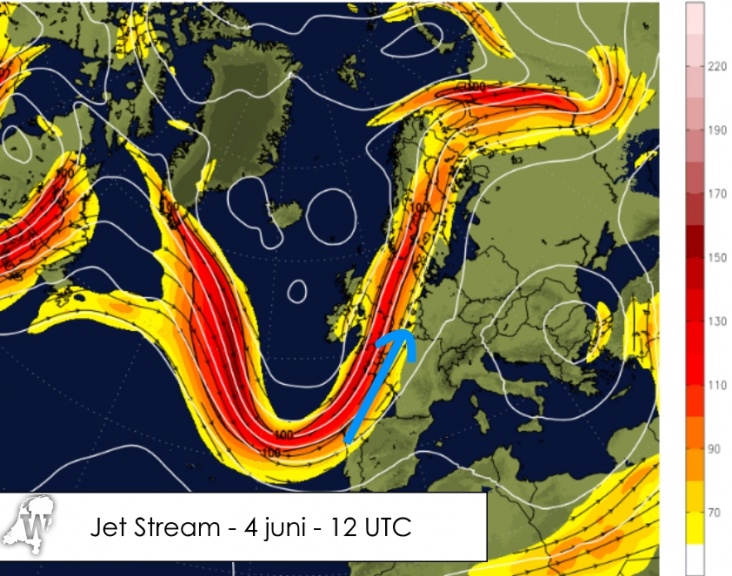 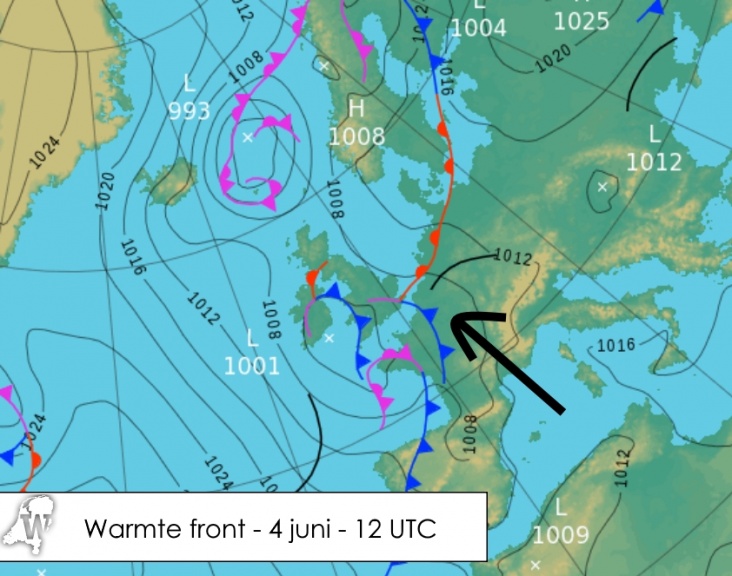 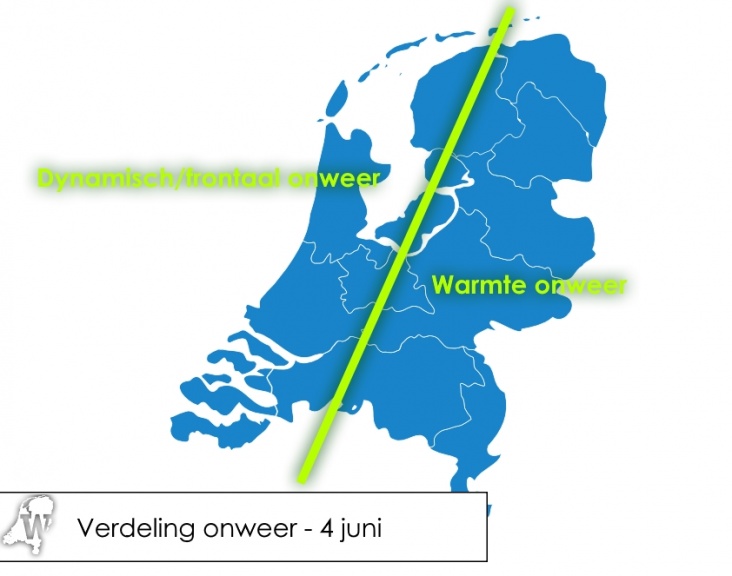 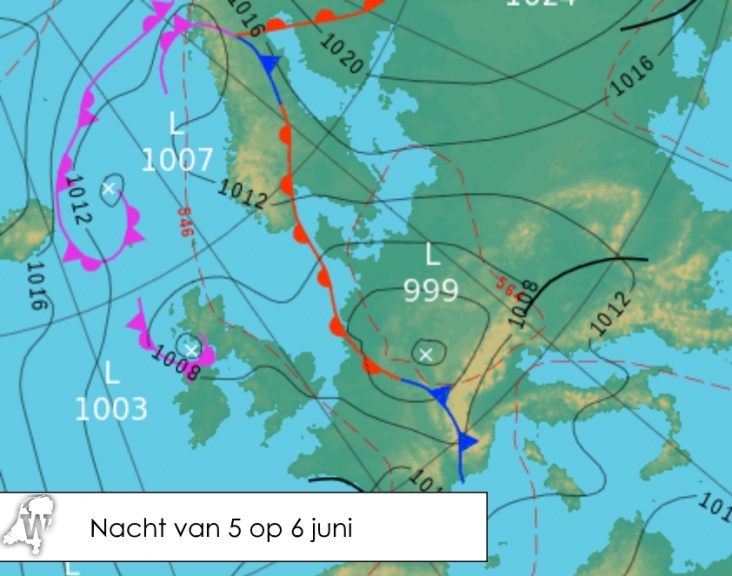 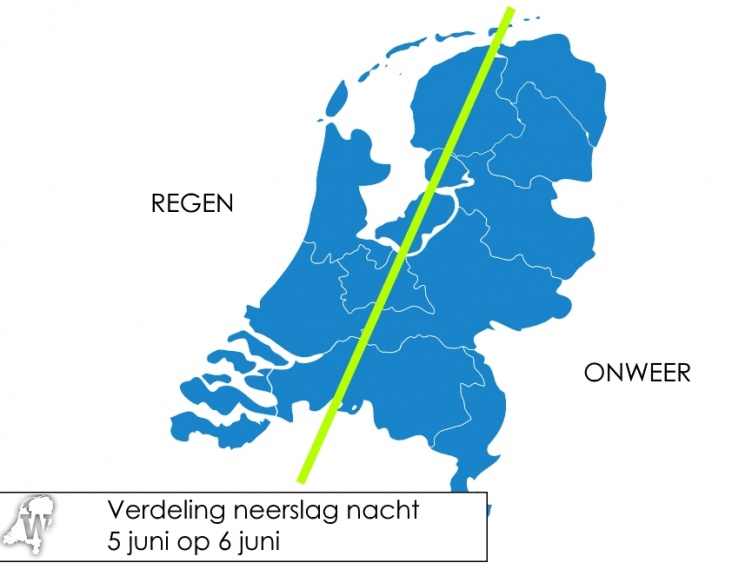 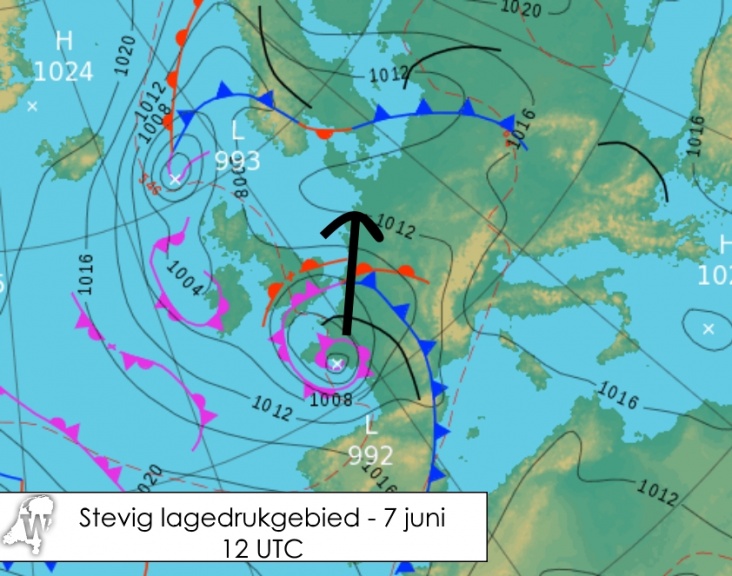