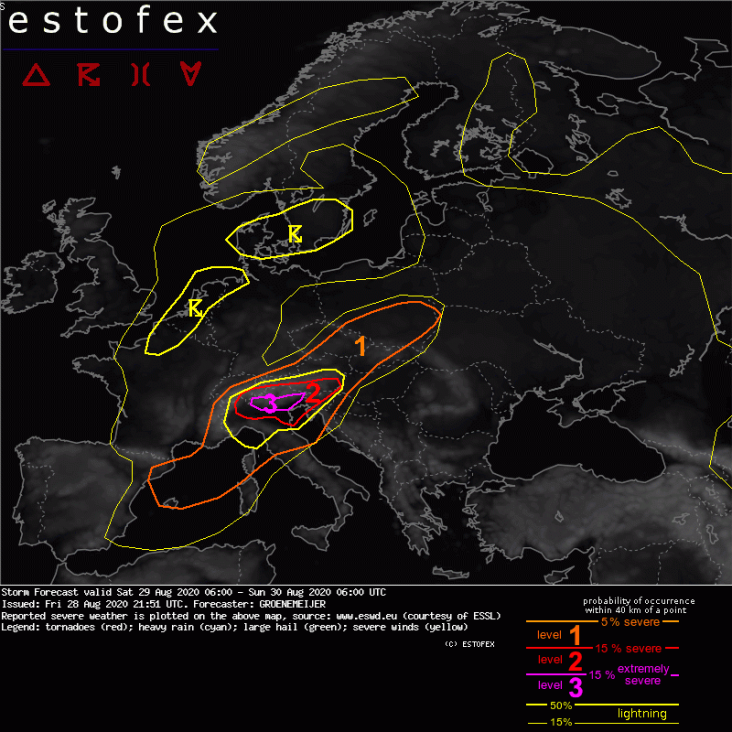 A level 3 was issued for the southern Alpine flanks and the northern Po Valley, roughly from Milano to Pordenone (Friuli) for potentially strong tornadoes, large hail, extreme rainfall, and damaging winds.

A level 1 was issued across adjacent parts of the Alpine countries and the Northwest Balkans for very heavy rainfall, large hail and wind gusts and to a lesser extent for tornadoes.

A level 1 was issued for parts of Czechia, Slovakia, and Poland for wind gusts and large hail.

A level 1 was issued for far Southeast France and Corsica as well as Northeast Spain and the Balearic Islands for heavy rainfall and to a lesser extent for large hail and wind gusts.

Between an elongated trough stretching from the North Sea to the Iberian Peninsula and a ridge along an axis from central Finland to Turkey, mid-tropospheric flow is from the southwest. As a shortwave trough rounds the base of the larger trough across Iberia a strong 30-40 m/s mid-level jet develops across the Western Mediterranean. At lower levels, a frontal zone roughly stretches from Southeast Spain via NW Italy to Northeast Poland. The air-mass on the warm side of the front is characterized by fairly steep mid-level lapse rates and high low-level humidity that in combination yield ample surface-based CAPE. As a result of this instability and the strong wind shear provided by the mid-level jet, severe convective storms are expected to develop near and on the warm side of the frontal zone.

Pressure falls in response to the approaching trough are expected across NW Italy and the Gulf of Genoa that will result in an increasing easterly flow across the Po Basin. This advection of warm moist air, will contribute to the buildup of moderate (1000-2500 J/kg) CAPE across this area and contribute to strong wind shear, that per NWP guidance should be around 25 m/s, mostly concentrated in the lowest 3 kilometers. Long curved hodographs featuring between 250 and 500 m2/s2 of 0-3 km SRH and locally up to 400 m2/s2 0-1 km SRH are highly supportive of supercells capable of producing large hail and damaging wind gusts. Additionally, a few strong tornadoes will be possible with storms that develop in such strong shear. Support for this scenario is further provided by convection-allowing models that simulate updrafts with very strong updraft helicity.

In addition to the tornado risk, the southwesterly upslope mid-level flow along the southern flanks of the Alps will aid in cell-backbuilding that will create a pronounced risk of very high accumulations of precipitation, prone to produce flash flooding in places.

Further east across western Slovenia and southern Austria and across southern Switzerland, heavy rain will be the most prominent risk, although all other hazards are possible there as well.

Adjacent parts of the Alpine countries and the Northwest Balkans...

Within the level 1 area covering these regions, heavy rainfall aided by orographic promotion of sustained cell regeneration is the most prominent risk, although large hail, damaging gusts are possible and a tornado cannot be ruled out either.