LOS ANGELES - Rain began pelting parts of Southern California early Friday as a fierce winter storm from the Pacific Northwest moved in ahead of schedule, triggering fears that recent wildfires may have left the region susceptible to flash flooding.

Southern California has had a very dry rainy season, and it will be the first time since April 2006 that so much rain has fallen from a single storm, said Stuart Seto, chief weather specialist with the National Weather Service in Oxnard.

The weather service issued a flash flood watch for coastal and mountain areas through Friday afternoon. The forecast called for winds gusting to about 30 mph ahead of a storm front that could drop up to an inch of rain in urban areas and up to 3 inches in the mountains, Seto said.

The weather service also issued a high wind warning for the mountain areas and in the Antelope Valley, north Los Angeles county. The winds were expected to blow 30- to 45 mph, with potentially damaging gusts of up to 60 mph, said meteorologist Todd Hall.

â€˜It doesnâ€™t take muchâ€™
Areas denuded by recent fires were a special concern. Wildfires have stripped vegetation from thousands of acres of land now susceptible to excessive runoff and erosion.

â€œIt doesnâ€™t take much to set off those mud and debris flows,â€ Seto said.

Before the storm hit, a few thousand people were evacuated on Thursday from three Orange County canyons burned bare by wildfires earlier in the year. Orange County sheriffâ€™s patrol cars broadcast the warning through loudspeakers to residents of Modjeska, Williams and Silverado canyons.

Section of I-5 partially reopened
In Los Angeles County, work crews sandbagged hillsides in Griffith Park, where about 1,200 acres â€” almost 2 square miles â€” were scorched in May. Other work was under way in Malibu, where a wildfire destroyed 53 homes in November.

In Washington state, meanwhile, officials partially reopened a section of Interstate 5 that had been swamped by floodwater and closed for three days after a previous storm system crashed through the region.

A 20-mile stretch of the freeway near Centralia was shut down Monday night, when the swollen Chehalis River made the route too dangerous to use. The interstate eventually was covered by as much as 10 feet of water, officials said. By Thursday night, receding floodwater and repair work allowed the state to open one northbound and one southbound lane, with traffic initially limited to freight haulers. 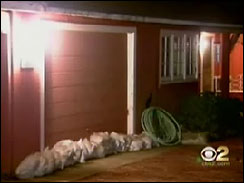 With heavy rain creating a threat of mudslides in areas of Orange County recently denuded by wildfires, sandbags help guard one home.

CBS News correspondent Hattie Kauffman, reporting from Malibu, reported that residents whose neighborhoods had been burned in recent wildfires were ordered to leave their homes.

Already 2,000 people have been evacuated.

Up to three inches of rain had been expected in three fire-denuded canyons in Orange County, but only about half that amount fell overnight.

Still, the narrow, sandbagged streets were at risk of mudslides and flash flood watches remained in effect for burned areas through Friday afternoon.

Mandatory evacuations are lifted in Orange County as mudslide fears ease, but more rain is expected. Power outages affect more than 15,000 residents. More showers for the region were forecast for this afternoon, with the possibility of thunderstorms and small hail over the weekend, meteorologists said today. "We're not completely out of the woods," said Steve Vanderburg of the National Weather Service in San Diego. "Don't let the breaks in the weather fool you."

A significant rainstorm had been expected to dump as much as three inches of rain on Southern California over two days but instead moved through quickly, delivering more of a glancing blow to Los Angeles and lessening immediate fears of mudslides in burn areas.


More than 15,000 residents of South Los Angeles, Cheviot Hills, Crenshaw and Playa del Rey lost power early this morning due to rain-strewn debris on power lines, said Gale Harris, a spokeswoman for the Department of Water and Power. By this afternoon, more than two dozen crews had restored power to all but 1,600 customers.

About half an inch of rain had fallen around the Los Angeles Basin by this morning -- slightly less than was forecast, Vanderburg said.

Authorities this morning lifted a mandatory evacuation of wildfire-scorched canyon areas of Orange County. Residents of Modjeska, Williams and Santiago canyons were allowed back into their neighborhoods at 10:30 a.m. after inspectors toured the area.