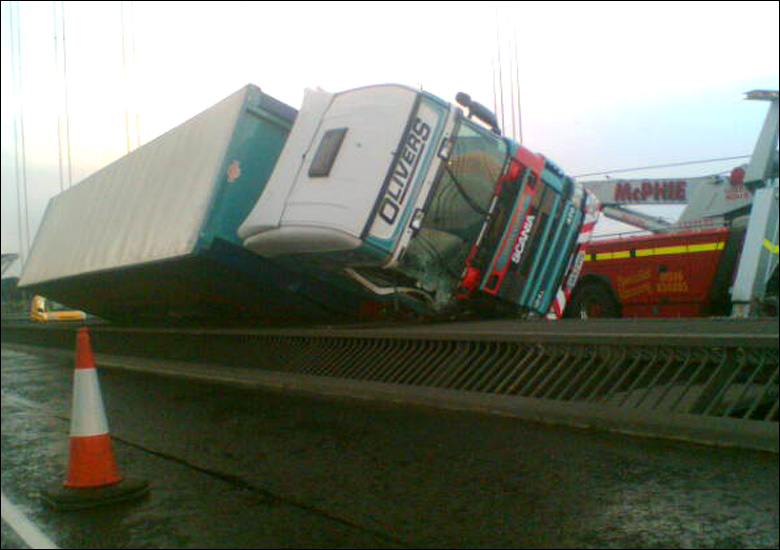 The Forth Road Bridge has been closed to northbound traffic after a lorry overturned in high winds. One lane has also been closed southbound on the bridge, which is only open to cars. Traffic was diverted via the Kincardine Bridge but this is now congested and causing an impact on traffic in the Stirling area. Drivers heading to Fife were told to use the M9, carry on up the A9 towards Perth and then get onto the M90. Central Scotland Police said this should help ease congestion on the roads around the Kincardine Bridge, which were experiencing "severe tailbacks". Strong winds are hampering the recovery operation on the Forth bridge, but the emergency services hope this can take place before wind speeds increase.

The stormy weather has caused travel disruption across Scotland. Restrictions were in place on the Tay and Erskine bridges, and further north there were also warnings on the Skye and Kessock bridges. Central Scotland Police are advising people to avoid the area. In Dumfries and Galloway, fallen trees led to the closure of the A7 at Irvine House, Canonbie, and blocked a number of minor roads in the Annan area. All Caledonian MacBrayne ferry sailings between Gourock and Dunoon have been cancelled due to industrial action by council staff, but the weather was expected to cause disruption to other services. Travellers have been advised to check with individual companies before they start their journey.

Winds reached 80mph on the Tay Bridge on Thursday morning and 70mph gusts are forecast for the west coast and the Northern Isles. Severe gales, storm-force northerly winds and snow showers are expected later, especially in north and west Scotland.

Bad weather is hampering efforts to salvage a lifeboat stranded on rocks at Rathlin Island, off the Antrim coast. The Portrush lifeboat got into difficulty while attempting to rescue three people whose boat was in danger. After several attempts to throw a line to the stricken boat, the RNLB Katie Hannan was forced onto rocks by a heavy swell at 2000 GMT on Tuesday. 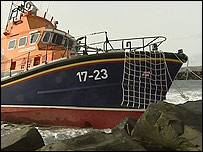 The boat crashed onto rocks at Rathlin Island

Despite the efforts of a fishing vessel and the Larne lifeboat, the stranded lifeboat could not be moved. The three people who the lifeboat had gone to assist were rescued by the Rathlin Island Coastguard crew. Two of the lifeboat crew on the Katie Hannan were thrown into the water from its small inflatable rescue boat after assisting in the attempts to refloat the boat. They managed to climb onto nearby rocks. RNLI Head of Coastal Management George Rollinson said on Thursday it was important for the vessel to be freed soon. He said they were confident they could make progress "if not today then tomorrow," but there were no guarantees because of the weather and problems getting to the boat.

A lorry driver was killed when his vehicle was blown over in high winds which battered parts of the north-east of England and Cumbria. Police said the 45-year-old was pronounced dead at the scene of the incident, on the northbound M6 near Tebay in Cumbria, early on Thursday. A 50-mile stretch of the motorway was closed to all traffic as winds gusted up to 70mph. Elsewhere, roads and rail services were affected by fallen trees and debris. Northern Rail reported delays between Newcastle and Hexham after a tree fell on the line at Wylam, Northumberland.

Delay journeys
Police urged drivers to travel only if necessary. In Northumberland, the A68 was closed in both directions due to a fallen tree near Kiln Pit Hill. A spokesman for the Highways Agency in Cumbria said: "We had about six incidents in the early hours alone on the M6. "We've basically had to deal with lorries being blown over and blocking carriageways. "The police asked us to close it totally for a time and we are asking people to delay their journeys if possible and keep an eye on the weather. "We are not expecting the situation to improve until the afternoon." The high winds and rain were expected to move south during the day. Winds of up to 60mph have forced the closure of the Port of Dover. Forecasters have predicted a storm force 10 in the English Channel and a severe weather warning has been issued by the Met Office. 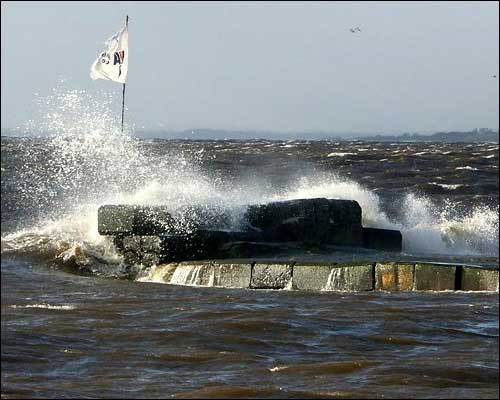 Bad weather has forced the cancellation of a number of ferries between Northern Ireland and Great Britain. Thursday's P&O ferry sailings between Larne and Cairnryan in Scotland have been suspended. Earlier all Irish Ferries Swift sailings on the Dublin Holyhead route were cancelled. The Met Office has issued a severe weather warning of westerly gales affecting exposed parts of Northern Ireland and southwest Scotland. High winds have also forced the cancellation of the Liffey Ferry in Dublin city.