Hundreds of thousands of homes could be uninsurable and uninhabitable unless stricter planning controls are introduced, insurers have warned. The Association of British Insurers (ABI) said a third of the three million new homes the government wants to see by 2020 will be built on flood plains. The ABI says last summer's floods cost the industry more than Â£3bn. It said 13 major developments have been passed, despite Environment Agency advice on flood risk in the past year.

Seven of the sites, including a new caravan park and a development of bungalows, are deemed to be at high risk from flooding. The government's ambitious housing plans are in jeopardy unless we reduce the flood risk, said the ABI's assistant director of property, Justin Jacobs. 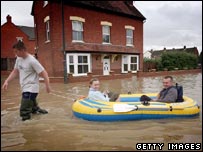 Insurers have so far paid out Â£1 billion after last summer's floods.

"Where a local authority plans to ignore flood risk advice, the government should step in and review the proposals and be compelled to publish their decision," he said.

The association said where a local authority plans to ignore flood risk advice, the government should step in and review the proposals and be compelled to publish their decision. He said: "Insurers want to continue to provide flood cover, but poor planning decisions will lead to more homes becoming unsaleable, uninsurable and uninhabitable."

Despite the Environment Agency being consulted on new developments, as a statutory requirement, planning permission was still being given despite the agency highlighting flood risks, the group said.

At the same time it said some new developments were displacing flood risks to other areas. The 2007 floods in Yorkshire, Gloucestershire and Worcestershire will cost the insurance industry more than Â£3 billion, and, combined with other events, they helped make 2007 the worst year ever for weather-related claims. The ABI said insurers had so far paid out Â£1 billion of claims as a result of last summer's floods.

More than half of the 15,000 households that were in temporary accommodation have now been able to return home, while three-quarters of people are expected to be back in their own homes before Easter, it added. Insurers have pledged to continue offering flood insurance to existing policyholders where the risk of floods is being managed. But after the 2007 floods and in the light of the increasing number and extent of floods linked to climate change, the industry is reviewing the issue.

The UK is to receive about Â£120m from the EU to help repair damage caused by heavy floods in England last summer, it is expected to be confirmed later. The UK applied for money from the EU Solidarity Fund, to cover costs like rescue services and temporary housing. The rules stipulate it must be spent by public bodies such as local authorities or ambulance trusts.

About 48,000 homes and 7,000 businesses were flooded in south-west England, the Midlands, Yorkshire and Humberside. The floods were also linked to the deaths of 13 people. Last month local government minster John Healey confirmed that thousands of families had still been unable to return home, more than six months later.

Insurance claims have topped Â£3bn. Councils in those areas have already received more than Â£18.4m in "recovery grants" so far.

12-month deadline
The European Commission has already recommended that the money be given to the UK. If a vote by MEPs later approves the payout and the money is transferred to the Treasury, it will be the UK's first successful application to the EU Solidarity Fund, which was set up in 2002.

Danuta Hubner, the European commissioner for regional policy, said the money would help put "basic infrastructure back in working order". But it will not go towards costs borne by insurers - such as costs of damaged homes and cars. Instead it will go towards reimbursing costs for things like emergency repairs to gas, water, electricity services and phone lines and general cleaning up. It must be spent within 12 months and will have to be accounted for in detail.

Once the money is received, a consultation process will begin, to decide the best way to allocate the funding. The Local Government Association, which represents councils, says it expects a lot of interest from its members for a share of the money.