Colombia's Nevado del Huila volcano has erupted in a shower of hot ash, prompting authorities to evacuate thousands of people and declare a state of alert. There were no reports of damage or injuries. The volcano, about 180 miles southwest of Bogota in the northern Andes, erupted at 11:08 p.m. Monday (0008 Eastern Tuesday), according to the Colombian Institute of Geology and Mining. 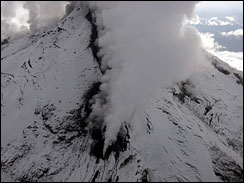 This photo released by Ingeominas shows the Nevado del Huila volcano in the southwestern state of Huila, Colombia, Monday, April 23, 2007. The volcano was spewing ash Tuesday, April 15, 2008, prompting the goverment to evacuate thousands of people from the area.

Martha Calvache, deputy director of the institute's seismic department, told Caracol Radio that authorities were unable to
estimate the size of the eruption. She said the volcano was expelling ash. "Other types of material could come, like lava, but we don't at the moment know the exact situation," she said.

Caracol Radio reported that between 13,000 and 15,000 people who live near the volcano were being evacuated.