Large parts of central and southern Britain should expect "exceptionally heavy" rain overnight and be prepared for flooding, the Met Office warns. Cumbria and Lancashire suffered very wet weather on Saturday but this is set to move further south on Sunday. The worst of the downpour is set to hit the Midlands, East Anglia and Wales - resulting in 50 to 80mm (3in) of rain and possibly more than 100mm (4in).

Gale force winds are also expected in coastal regions. People are warned that this could mean disruption to public transport.

The Environment Agency has placed 16 rivers under flood watch - 14 in the north west, one in the Midlands and one in Wales. But Met office forecaster Byron Chalcraft said the heavy rain could have had far more serious consequences had it arrived earlier.

He said: "We've had a good dry period recently. Had this occurred a couple of weeks ago - when river levels were higher it could have been a lot worse. A brief period of respite has been forecast on Monday with a cold and bright start before the rain returns once more the following day.

Flood warnings have been issued for parts of north and mid Wales after heavy overnight rain. The warnings are in place for Llanrwst and Trefriw in the Conwy Valley, and the Dyfi Valley and Machynlleth. The Environment Agency says there are also 12 flood watches as forecasters predict as much as 70mm (3in) of rain. 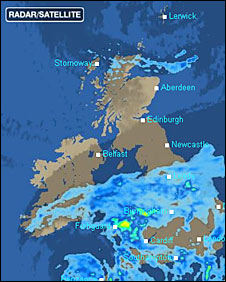 The Sunday forecast shows rain affecting the whole of Wales

There has been some flooding in Carmarthenshire, with the Llwyndafydd Arms pub at Saron, Llandyssul, affected, as well as in Burry Port. Fire crews were called out to pump floodwater from the basement of the pub. As well as Wales, parts of the Midlands, northern England, and East Anglia are likely to see 30 to 50mm (2.5in) of rain and possibly more.

Across the UK, 50 rivers have been placed under flood watch. In Wales flood watches are in place for the catchment areas of Anglesey, Conwy, Dyfi and Leri, Dysynni, Glaslyn and Dwyryd, Mawddach and Wnion, north Gwynedd, River Neath, Rivers Loughor and Amman, Upper Dee Valley, Upper Severn in Powys, and Vyrnwy.

Forecasters said it would be unsettled on Sunday, and mostly wet and windy. On Monday there will be a brief respite, with a cold and bright start, before the rain returns on Tuesday.