In the northwest, the National Weather Service (NWS) has issued winter storm watches for many parts of the Rockies, including Montana, Idaho, Wyoming and Utah. Up to 51cm (20 inches) of snow is forecast to accumulate over parts the mountains by Sunday night.

Many parts of southern Montana and northern Wyoming have already been blanketed with snow. Road conditions are becoming dangerous and power outages have been reported. Several flights have been delayed or diverted and trees have been downed.

Meanwhile, further south, Hurricane Norbert - a powerful storm in the eastern Pacific - is forecast to hit Mexico later today. The stormy conditions in the northwest will steer Norbert northeast, bringing heavy rain, strong winds and possible flooding to the Plains later this weekend. Kansas, Texas and Oklahoma are most at risk, and in places, this heavy rain is falling on already saturated ground.

Thankfully for the residents of the affected areas, the wintry weather is not set to stick around for long. Some drier and milder weather is forecast for early next week. However, this forecast is not such good news for ski enthusiasts hoping for an early start to the winter ski season. 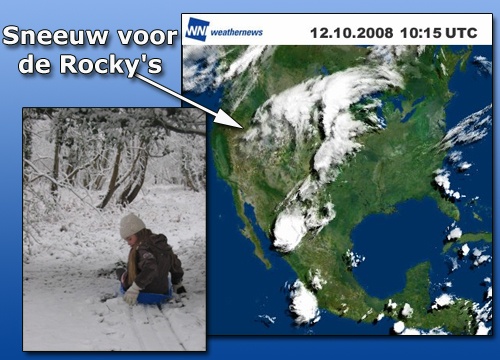 Snow plows were called in for the first time ever to plow the new artificial turf on Wendy's field at Daylis Stadium, Friday Oct. 10, 2008. The cross town rival game between Billings Senior and Billings West is Friday night.

Billings Firefighters check out a large branch on a utility line on N22 St. near 6th Ave. N.Saturday October 11, 2008 .

A herd of pronghorn antelope hunker down in a snowy field in the Billings Heights as a winter storm hits the Billings area Saturday, October 11, 2008.

Snow and ice covered tractor-trailers are parked along Highway 3 near Billings during Friday's snowstorm.

A car parked along Alderson Avenue is covered by a fallen tree branch as a winter storm hits the Billings area Saturday, October 11, 2008.

Mike Schied of Schied's Auto Body and Towing pulls a car from the ditch along Highway 3 between Zimmerman Trail and the airport Friday October 10, 2008.