The fire, stoked by hot dry winds and fueled by dry chaparral, quickly doubled in size in an unincorporated part of Orange County and threatened homes here and in Anaheim Hills.

"There is a lot of fire personnel out there and they are doing the best they can, but the weather is not in their favor," said Lynnette Round, an Orange County Fire Authority spokeswoman.

At least one home in Anaheim's Hidden Canyon neighborhood was on fire and many others immediately threatened, Nicoletti said.

Authorities believed the blaze began with a vehicle fire, Round said. More than 200 firefighters were on the scene, but winds as high as 35 mph were complicating firefighting efforts, authorities said.

The area, like much of Southern California, is under a red flag alert, indicating a high fire danger. A prolonged drought has left the chaparral-covered hills highly combustible. 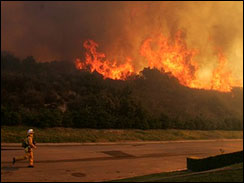 Early Monday, firefighters had the 3-square-mile, day-old blaze 30 percent contained, but Orange County Battalion Chief Ed Fleming said it would likely take a second night of cooler temperature and increased humidity to get it fully contained.

A red flag alert, indicating high fire danger, was in effect in much of Southern California, where a prolonged drought has made the chaparral-covered hills highly combustible.

At daybreak Monday, the temperature was still in the upper 50s, compared to Sunday's highs near 100. 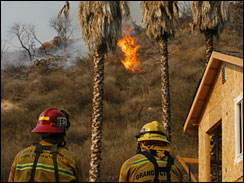 Firefighters watch as a wild fire burns itself out on a hillside in Anaheim Hills, Calif., Sunday, March 11, 2007 (AP Photo/Mark Avery)

"The weather is cooperating at this point," Orange Fire Capt. Ian MacDonald said. "We're hoping that continues throughout the day and we can get this out as soon as possible."

"In Southern California, we're always 24 hours away from having a wind-driven, low humidity fire," MacDonald said. 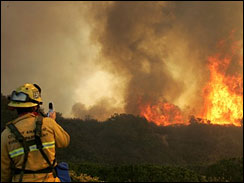 A firefighter takes a photo of a wildfire in Anaheim Hills near Orange, Calif., Sunday, March 11, 2007. (AP Photo/Orange County Register)

Winds could reach as high as 30 miles per hour in Orange County, according to the National Weather Service. Temperatures Monday are expected to reach the 80s and 90s. Coupled with a drop in humidity, Fleming said, "all of those work against the firefighters." 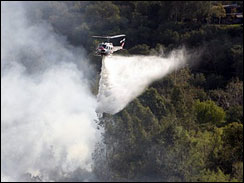 The wildfire was reported Sunday morning, and hot, dry wind quickly spread it through an unincorporated part of Orange County, threatening multimillion-dollar homes here and in Anaheim Hills, about 35 miles southeast of Los Angeles.

Residents of about 500 homes were evacuated but most were able to return Sunday night. Two homes and another structure were damaged, and a fourth structure was destroyed, said Capt. Steve Miller of the Orange County Fire Authority.

Authorities said the blaze may have been started by a vehicle fire. They were investigating if the car was stolen and set on fire to destroy evidence.

Temperatures hit record highs for March 11 in many spots, including 97 in nearby Fullerton. The city's previous record high for the day was 84 degrees in 1959. The wind gusted to 49 mph and humidity hovered around 5 percent. 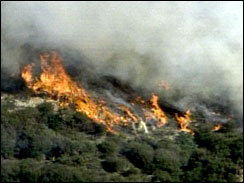 At least one home in Anaheim's Hidden Canyon neighborhood was on fire and many others immediately threatened. (CBS)

Richard Steffy said he saw the fire out his window when he awoke Sunday morning. "Boom, billows of smoke," he said. "It looked so close."

The dry weather comes two years after the region was awash with a near-record 37 inches of rain. Only about 2.4 inches of rain has fallen on downtown Los Angeles since July 1. Normal annual rainfall in Los Angeles is 11.43 inches.

The National Oceanic and Atmospheric Administration's weather models suggest that an emerging La Nina pattern of cold water in the tropical Pacific will keep the area dry.