A record was set in the tropical northwestern Pacific Ocean as the basin entered its longest stretch of time without a named tropical cyclone.

The new record of 199 days ended on Sunday with the development of Tropical Storm Nepartak. The lack of tropical systems occurred from Dec. 17, 2015, to July 2, 2016. 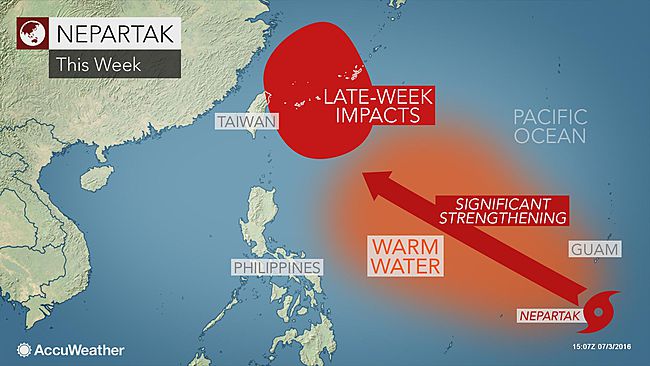 Strengthening Tropical Storm Nepartak will track to the northwest through the coming week, likely strengthening into a typhoon by Tuesday or Wednesday.

Residents of Taiwan, eastern China, South Korea and Japan, including the Ryukyu Islands, are being put on alert for impacts from the tropical system during the latter part of the week.

Flooding rainfall will accompany Nepartak along its path. The risk of damaging winds and rough surf will heighten as it strengthens.

While the worst of the storm is expected to pass to the north of Taiwan, cities in northern parts of the country should remain alert for impacts. This includes Taipei and Keelung.

In the Ryukyu Islands, the Yaeyama and Miyako Islands will have the highest chance for significant impacts from high wind and flooding rainfall. Farther to the north in Okinawa, squally showers and thunderstorms are most likely.
Once in the East China Sea late this week, Nepartak is expected to curve to the north and northeast, potentially bringing impacts to South Korea and the southern mainland of Japan over the weekend. While weakening is expected during this time, Nepartak could still be a typhoon or strong tropical storm.

Nepartak is not expected to be followed by a flurry of tropical activity.

"The window for development looks to slam shut by the upcoming weekend," AccuWeather Senior Meteorologist Jason Nicholls said. "Then, I do not see much opportunity [for further development] until late July."

The current five longest stretches, including this year, without a named tropical system in the western Pacific Basin all occurred during transitions from El Niño to La Niña phase of El Niño-Southern Oscillation (ENSO). 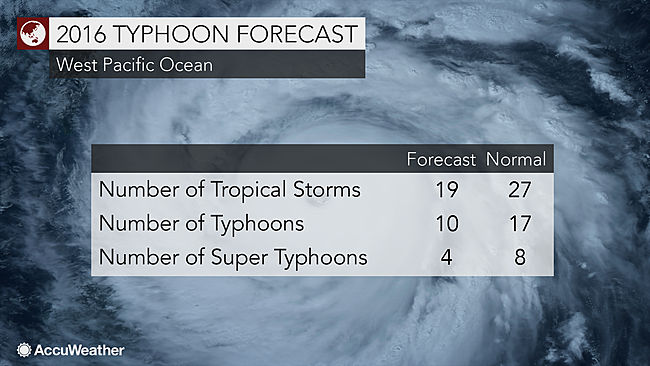 When the sea-surface temperatures in the same area of the Pacific Ocean are lower than average for a few months, a La Niña pattern has developed.

These below-normal sea-surface temperatures can have significant impacts on tropical development in the western Pacific Ocean.

AccuWeather.com meteorologists are currently predicting a below-normal season for the western Pacific basin with 19 tropical storms and 10 typhoons. This is significantly below the historical averages for the basin.

"This will be one of the least active years on record," AccuWeather Tropical Expert Meteorologist Dan Kottlowski. "The record [for least tropical activity in the western Pacific Ocean] is 14 tropical storms and nine typhoons in 2010."

Areas predicted to have the greatest threat from tropical cyclones over the remainder of this summer include the Philippines, Taiwan and China. This threat is likely to shift toward Japan later in the season.

Despite a well below-normal forecast for tropical cyclones in the western Pacific Ocean, people should not let their guard down as a single strike from a powerful cyclone can cause great destruction and loss of life.

Nepartak exploded from a tropical storm on July 4 to a Category 5 equivalent super typhoon the following day.

Nepartak further intensified into a super typhoon on Tuesday afternoon.

Super Typhoon Nepartak is forecast to move west-northwest and then northwest around the periphery of subtropical high pressure that is in place over the western Pacific.

Exactly when and how sharp Nepartak turns toward the northwest will ultimately determine the impacts in Taiwan, Japan's far southwest Ryukyu Islands and parts of eastern China later this week.
As of this time, it's too soon to tell which of these areas would take a direct hit from Nepartak's core of most intense winds. However, it's looking more likely that at least some part of Japan's far southwest Ryukyu Islands and/or Taiwan will see significant impacts in the form of strong winds and heavy rainfall.

For now, any impacts in Japan's far southwest Ryukyu Islands and Taiwan would arrive Thursday into Friday (local time), and in eastern China, those impacts could arrive late Friday into Saturday. 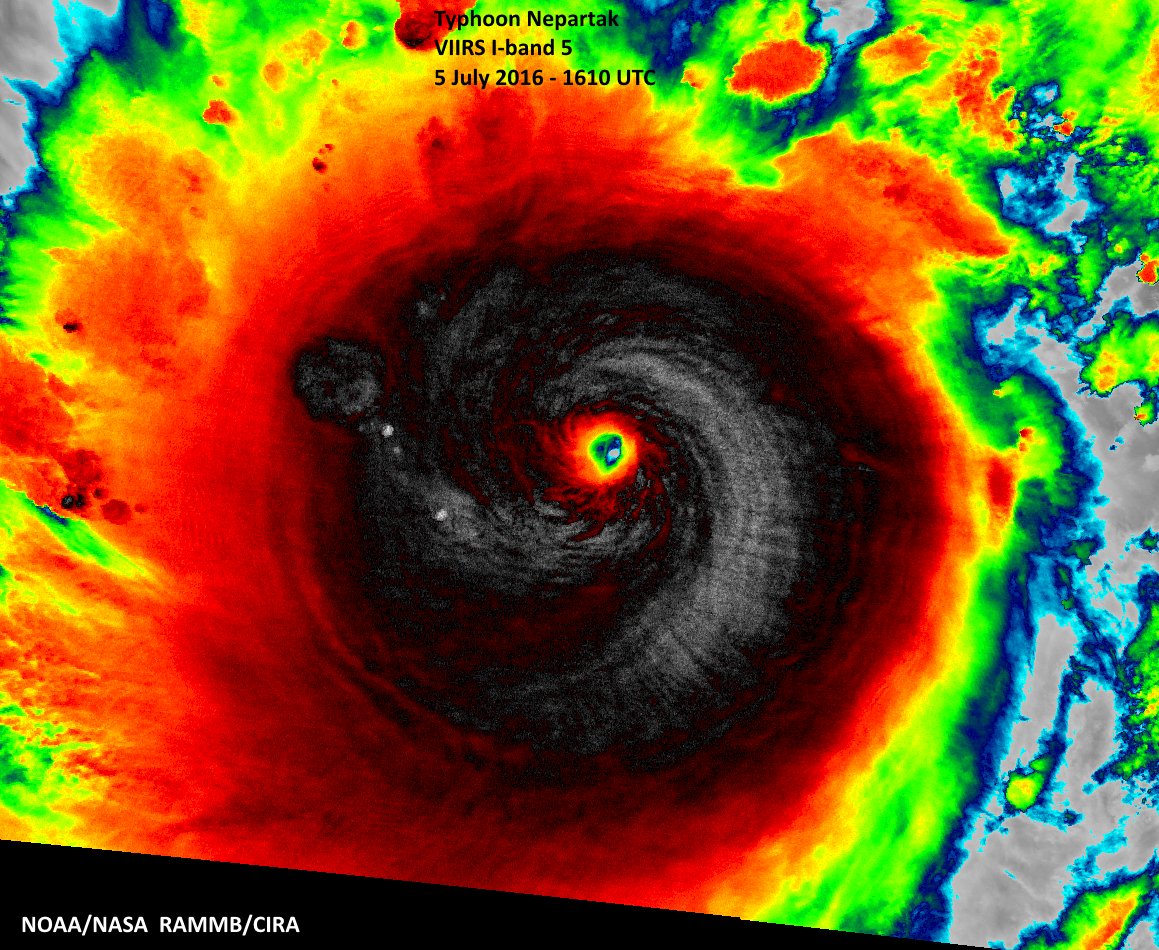 f course, the severity of those impacts will depend on the exact track and strength of Nepartak at that time.

Nepartak is forecast to strengthen further over the next 12 to 18 hours. Short-term, hard-to-predict fluctuations in intensity are common in intense tropical cyclones due to their eyewall being replaced one or more times.

It may weaken a bit before affecting the southwest Ryukus and Taiwan, but still may be an intense tropical cyclone at its nearest pass to those areas. Nepartak is expected to be considerably weaker once it nears China, but how much weaker remains uncertain, for now.

All interests from Taiwan and Japan's Ryukyu Islands to eastern China should monitor the progress of Nepartak closely.

In addition, flooding may be a serious threat along and, potentially, some distance north and east of the path of Nepartak from Taiwan to southwest Japan.

Prior to Nepartak's formation, not a single tropical storm, much less a typhoon (the term for a hurricane in the western North Pacific Basin), had formed west of the international date line since mid-December 2015. Typically this area is the world's busiest tropical cyclone corridor.

This set a new record for the longest stretch without at least a single tropical storm in the western North Pacific basin in 66 years of records, according to Colorado State University tropical scientist Dr. Phil Klotzbach.

By the end of June 2015, there had already been nine tropical cyclones in the northwest Pacific basin, including three super typhoons of Category 5 equivalent intensity. 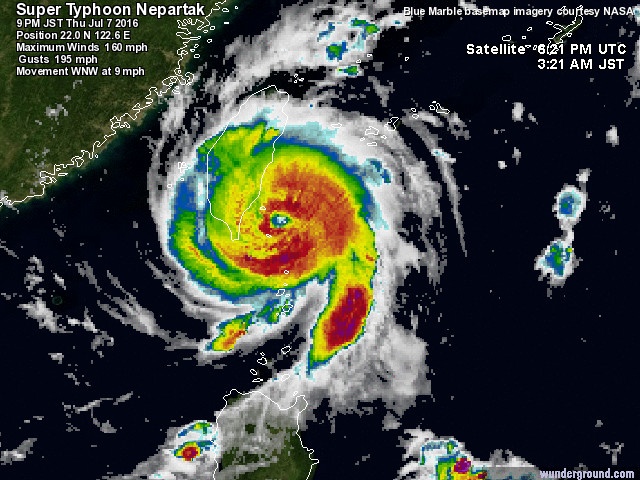