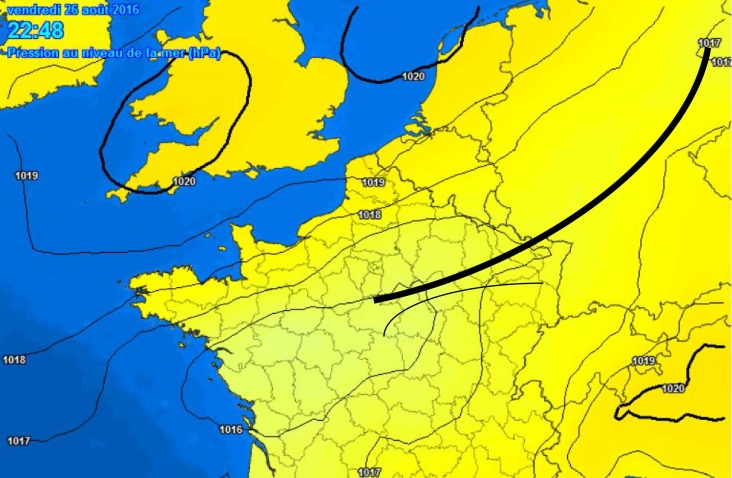 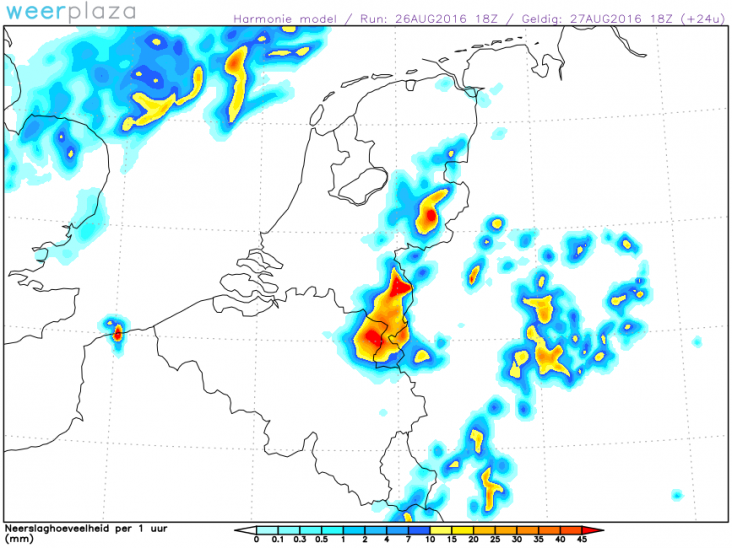 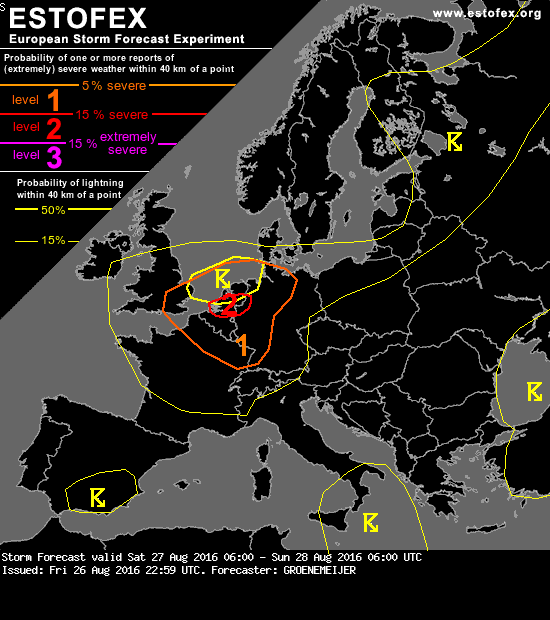 A strong elevated mixed layer is in place over France, the Benelux and western Germany. Ahead of an approaching trough, initially west of the British Isles, the flow is southwesterly. A weak shortwave trough is initially located over the Bay of Biscay and moves northeastward while deamplifying.

The main difficulty of the forecast is the coverage of surface-based convection in a potentially volatile environment.

At 06 UTC... a surface front should be approximately located from near Nantes to Paris to Hanover per model forecasts. During the day, the front is expected to move northward as a warm front. Model consensus puts it over the southern Netherlands and central Northrhine Westphalia at 18 UTC.

Convergence near the front will help to increase low-level humidity, so that a zone of dew point temperatures of 20-22 C should be common along the front by the end of the afternoon. In combination with the steep lapse rates this should yield up to 3000 J/kg MLCAPE.

Although a weak shortwave trough approaches from the southwest, initiation of deep, moist convection near the front, where the greatest overlap of CAPE and deep-layer shear will be present, is very uncertain. It is likely hindered by some remaining CIN and low relative humidity due to the stout elevated mixed layer.

The GFS 12 UTC run is the most aggressive with some storms in the 15-21 UTC time frame near the front over western and central Netherlands. In contrast, the ECMWF 12 UTC run produces only relatively little precipitation. It does so, however, in the warm sector over Belgium, northern France and Germany (in addition to elevated convection over eastern Britain, the North Sea and later the far northern Netherlands and Germany).

The conditions near the front would in principle be able to sustain supercells with a risk of very large hail and damaging downbursts. With elevated storms further north, this risk would be lower, although large hail would still be possible given the sizable elevated CAPE predicted by a consensus of NWP models. Any storms further to the south would still pose a risk of large hail and severe winds, but they would be less organized because of the weaker deep-layer wind shear.

The most likely scenario will likely be that isolated storms will develop over northern or northeastern France, over Belgium, Luxembourg and possbly western Germany that will pose a local risk of hail and severe winds. Additionally, a number of elevated storms will likely affect the northern Netherlands and possibly northern Germany. Storm development in vicinity of the warm front is uncertain. Even though the coverage will may be low, a level 2 seems to be marginally warranted at the moment, given the strong instability.
Stormchaser bij @Art_of_thunders.
Site: http://www.art-of-thunders.nl
Twitter: @LeonEikenaar
Sven
Moderator
Woonplaats: Antwerpen
Berichten: 5248
Lid sinds: 5 jul. 2011
27 augustus 2016, 09:00 uur | Bericht #473674 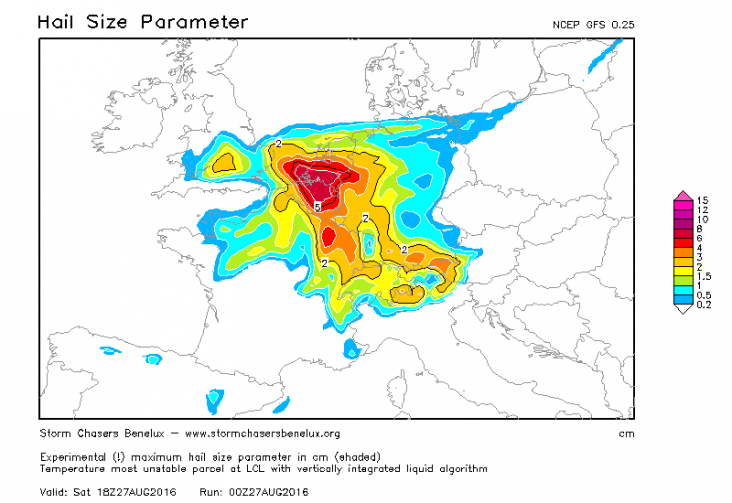 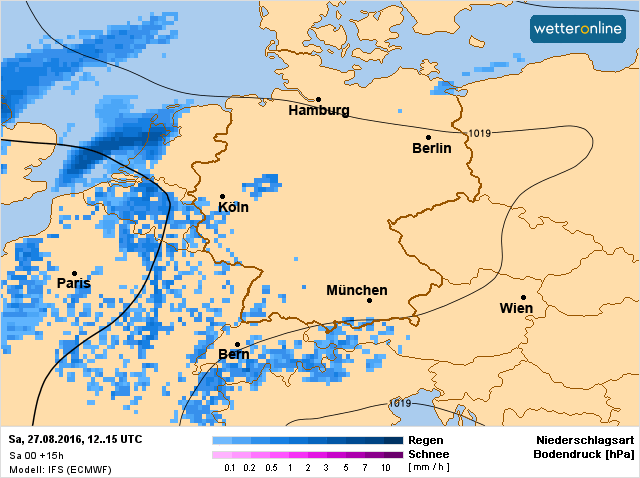 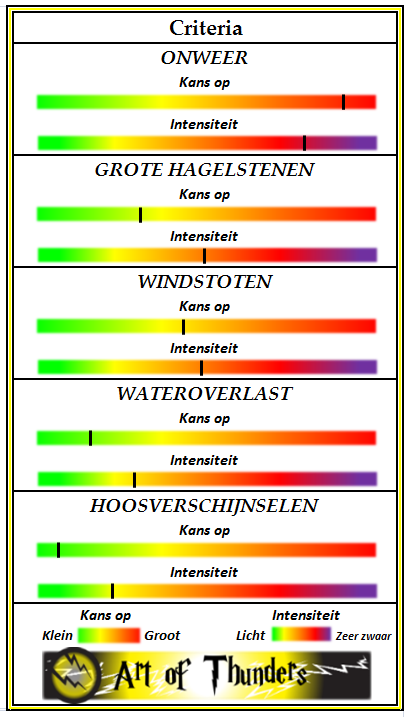 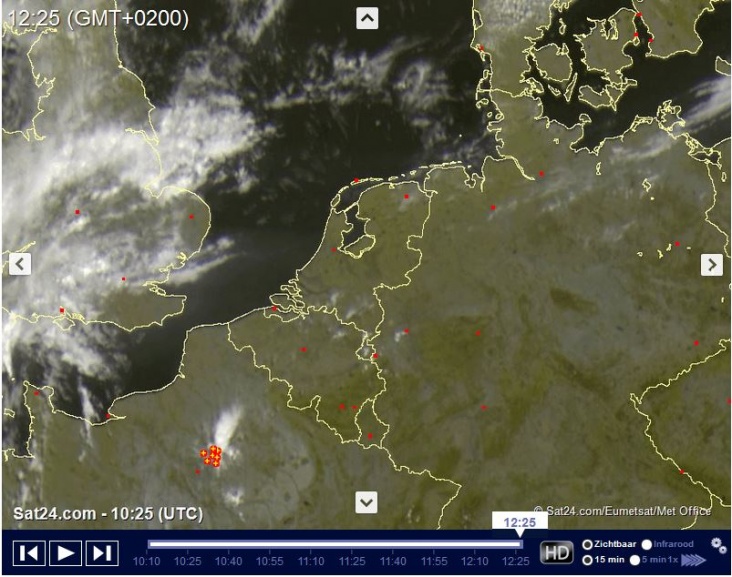