May 11, 2019: Northern Lights are usually green, sometimes red. Those are the colorswe see when oxygen is hit by electrons raining down from space during a geomagnetic storm. On Friday night, however, Harlan Thomas of Calgary, Alberta, witnessed a different color: deep-blue.

“To see these incredible blue pillars was out of this world,” says Thomas.

In auroras, blue is a sign of nitrogen. Energetic particles striking ionized molecular nitrogen (N2+) at very high altitudes can produce a blue glow rarely seen during auroral displays. In this case, it was the afterglow of a CME impact.

The CME left the sun on May 6th, propelled in our direction by an explosion in the magnetic canopy of sunspot AR2740. When it finally arrived on May 10th, the slow-moving storm cloud rattled Earth’s magnetic field, triggering a minor G1-classgeomagnetic storm. Auroras were sighted in parts of Canada as well as US States such as Michigan and Minnesota.

“To top it off, STEVE appeared for several minutes as well,” says Thomas, who captured it in this shot:

STEVE is a hot (3000 degrees C) ribbon of ionized gas slicing through Earth’s upper atmosphere some 300 km above the ground. It appears unpredictably during some, but not all, geomagnetic storms. Originally thought to be a form of aurora borealis, new research shows that it is not an aurora at all.

The soft purple color of STEVE may also be caused by emissions from nitrogen, according to a new study just published in the Geophysical Research Letters. Coincidence? STEVE and blue auroras seem to share a connection to the 7th elementon the periodic table. 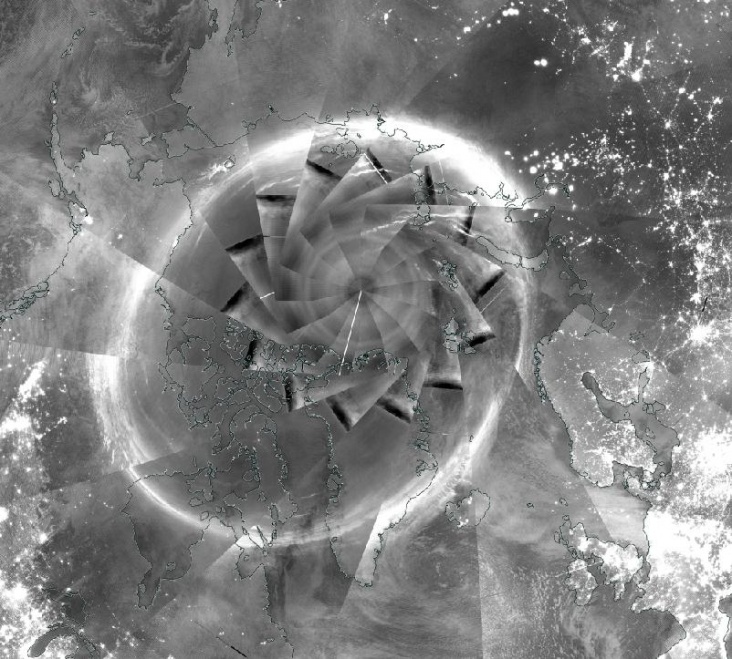 You've heard of auroras--green and purple lights that dance in the sky during geomagnetic storms. But have you ever heard of an SAR? Stable Auroral Red arcs (SARs) were discovered in 1956 at the beginning of the Space Age and have been recorded by cameras on satelliteshundreds of times since. Most aurora watchers have never seen an SAR, though, because they are usually invisible to the human eye. On Aug. 5th, Harlan Thomas caught one over Peyto Lake in Alberta, Canada: "I could not make it out with the naked eye," says Thomas, "but my camera captured the broad red arc in a 30 second exposure (ISO 3200). It meandered very slowly across the sky for hours, motions that distinguished it from ordinary green auroras visible in the sky that night." This sequence of images shows how the red arc lazily moved around: SARs are related to auroras, but they are not the same. Regular auroras appear when high-energy particles rain down along polar magnetic field lines, hitting the atmosphere (100-200 km high) and causing it to glow like the picture tube of an old color TV. SARs form differently. They are a sign of heat energy leaking into the upper atmosphere (~400 km high) from Earth's ring current system.

SARs can become visible to the naked eye during strong geomagnetic storms. The geomagnetic storm of Aug. 5th, however, was not strong, thus requiring long camera exposures to reveal the arc.
Bron: spaceweather.com

Earth is about to be hit by a double-stream of solar wind. The two streams are flowing from holes in the sun's atmosphere, shown here in an extreme ultraviolet image from NASA's Solar Dynamics Observatory: First night of our Aurora season and we already had a nice start! Let's hope for many more active nights. Wishing you all a great Aurora Fall & Winter ! #ExploreYukon #ExploreCanada #ComeToMyYukon #Aurora #NorthernLightsYukon #TravelYukon pic.twitter.com/Yprv77RqIV

#NASA #astronaut Randy Bresnik captured this amazing video of an #aurora while onboard the #InternationalSpaceStation. An #aurora occurs when gaseous particles collide with charged particles. Variations in color are due to the type of gas particles that are colliding. #Follow pic.twitter.com/Kq27sP9cj5

The Northern Lights came out for a bit this morning to dance across the skies for a quick preview of what is coming this weekend. Looking NW from Gull Lake, Alberta between 4:30 and 5:00AM this morning. #Aurora #NorthernLights #StormHour pic.twitter.com/sDriRFxl27

AURORAMAX ALERT • An #aurora is now visible above #Yellowknife, Northwest Territories. Check it out: https://t.co/W0tubtXe8j pic.twitter.com/E0Pkb0dpDZ

Haven’t seen these in a while. Glad I had the chance tonight. This weekend is supposed to be good for #AuroraBorealis. Be sure to check them out. #NorthernLights #tbay #StormHour @weathernetwork @thewalleye pic.twitter.com/UEnuW6NcIT

A few #NorthernLights shots spanning 10pm-3am. Kind of wished I would've stayed ~1 hr longer as it looks like a few pillars flared up later from pics in VT & ME. Just too cloudy/windy where I was, so packed it in. Oh well, happy with what I saw and captured. #nh #night pic.twitter.com/hawwznGDvL

Stunning display of the Northern Lights in northeast Montana during the morning hours of 9/1. It was incredibly bright at times and around 2 AM there was quite the display of pillars! #mtwx #Aurora #NorthernLights pic.twitter.com/eC0CARTNj2

Its fall y'all! wildfire smoke made the auroras hard to see but it definitely added a layer of spookyness to it!! #Alaska #Fairbanks #AK #auroraborealis #northernlights #halloween #Autumn #astrophotography #astronomy #explorefairbanks #aurora #SonyA7s #sonyalpha #bealpha pic.twitter.com/oD9RgsU2Sd

The #NorthernLights potential is increasing this evening across the Upper Midwest.Big spike in parameters. If you have clear skies look north! Possibly as far south as northern Iowa. #IAwx pic.twitter.com/l9IeNkKbTh

About last night finally a decent photo of the #NorthernLights , between heavy showers some good gaps past midnight. Glad to see you Lady #Aurora . May be more good sightings to come.#Scotland #OuterHebrides #nightphotography #auroraborealis #StormHour @TamithaSkov pic.twitter.com/l3X9quFCTl

Chased the aurora last night to Prosperous Lake and Vee Lake. Worth the chilly toes at -1°C. #NorthernLights #Yellowknife pic.twitter.com/OGXyxpb74U


SOLAR WIND, INCOMING: A new hole is opening in the sun's atmosphere, and it is spewing a stream of solar wind toward Earth. Estimated time of arrival: Nov. 10-11. Arctic sky watchers should be alert for extra-bright auroras on those dates.

THE FIRST FLARE OF SOLAR CYCLE 25: Big things have small beginnings. Years from now, observers may look back from the perch of the next Solar Maximum and realize that it all began on Nov. 5, 2019, with a very small solar flare. Extreme ultraviolet telescopes onboard NASA's Solar Dynamics Observatory recorded the blast: 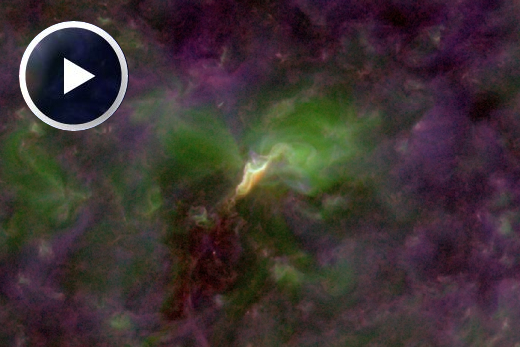 On the Richter Scale of Solar Flares, this one registered B1--that is, very small. B-class flares are 1000 times weaker than the intense X-flares of Solar Maximum. This small flare is nevertheless significant. It came from AR2750, one of the first sunspots of the the next solar cycle.

Sunspot AR2750 first appeared in the sun's southern hemisphere on Nov. 1st, breaking a string of 28 spotless days typical of the current Solar Minimum.  A picture of AR2750 is inset in this magnetic map of the sun's surface from the Solar Dynamics Observatory: 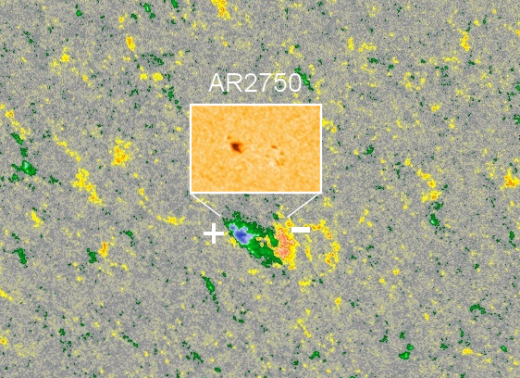 How do we know AR2750 belongs to the next solar cycle? Its magnetic polarity tells us so. Southern sunspots from old Solar Cycle 24 have a -/+ polarity. This sunspot is the opposite: +/-. According to Hale's Law, sunspots switch polarities from one solar cycle to the next. AR2750 is therefore a member of new Solar Cycle 25.

Solar cycles always mix at their boundaries. So far this year, short-lived sunspots likely belonging to Solar Cycle 25 have been reported on May 28, July 1st, July 8th, and Nov. 1st. They were interspersed with a similar number of old Solar Cycle 24 spots. This type of mixing is normal.

The increasing frequency of new cycle sunspots does not mean Solar Minimum is finished. On the contrary, low solar activity will probably continue for at least another year as Solar Cycle 24 decays and Solar Cycle 25 slowly sputters to life. If forecasters are correct, Solar Cycle 25 sunspots will eventually dominate the solar disk, bringing a new Solar Maximum as early as 2023.
Bron: spaceweather.com 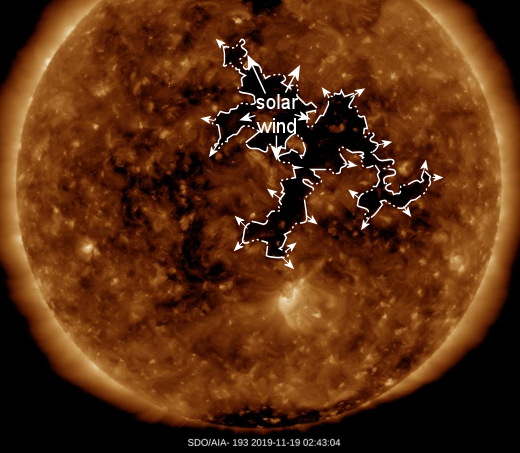 Earth is entering a stream of solar wind flowing from a sprawling hole in the sun's atmosphere. First contact with the gaseous material on Nov. 20th produced an outburst of auroras over Scandinavia. Markus Varik sends this picture from Tromsø, Norway: 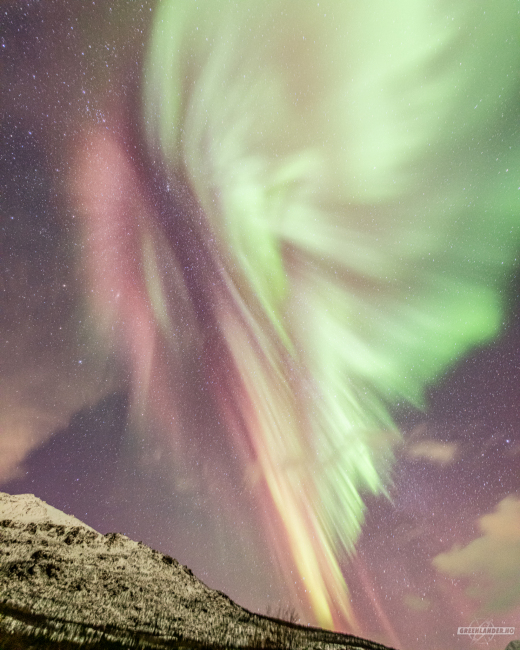 Today we greeted some of the most beautiful Night Butterflies I have seen!" says Varik. "The first effects of the solar wind stream have arrived--and I am really, really keen to see what the upcoming days will bring. Maybe a dinosaur, a bear or why not even a unicorn?"

In Abisko, Sweden, off-duty aurora tour guides Oliver Wright and Chris Hodgson rushed outside to photograph the display. "We set up our cameras on the edge of Lake Torneträsk behind some ice-covered trees," says Wright. "I've wanted to take this picture for years." 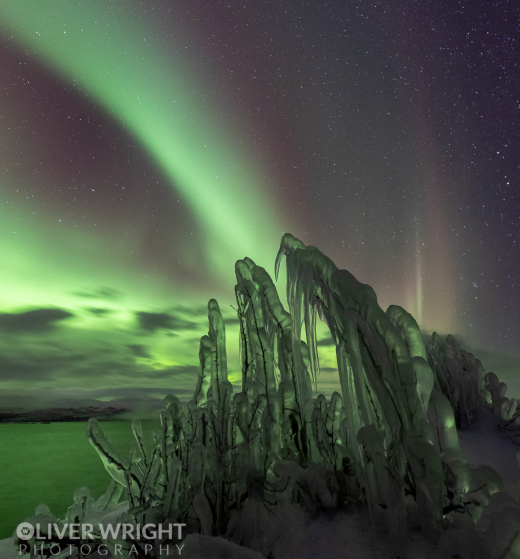 The place was lethal walking ... well, more crawling ... on uneven wet ice, above a big drop into the lake with waves crashing below! " says Wright. "Other than that, it was a magic night."

Tomorrow night could be magic as well. NOAA forecasters say there is a chance of G1-class geomagnetic storms on Nov. 21st as Earth moves deeper into the stream. If such a storm materializes, auroras could descend into northern-tier US states such as Michigan and Minnesota.
Bron: spaceweather.com

This is how an Aurora is created. pic.twitter.com/rCBVRbsvD8